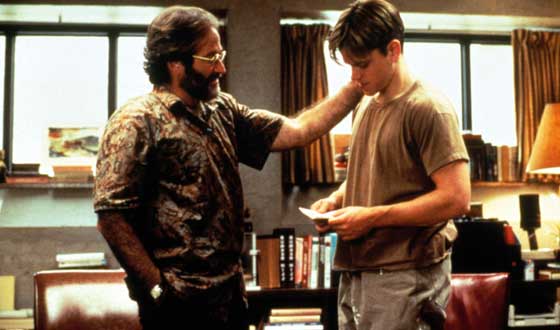 It’s funny how memory tries to fill gaps in experience. I was in sixth grade when Good Will Hunting came out—not old enough to be interested in seeing it, but old enough to be aware of its cultural significance. Awareness becomes recollection, and my recollections of the Damon-Affleck-Van Sant joint—which I just caught up with, 15 years later—turned out to be largely and amusingly false. For instance, I knew that one of the film’s characters was a janitor at a fancy college, but my compensating memory had convinced me that Robin Williams played the janitor and that there was probably some scene where the decrepit old beardo turned out to be a smartypants. As weird as it sounds, I’m pretty sure this false memory was heavily influenced by memories of another ’90s movie I never saw: With Honors, in which Joe Pesci—yes, I realize Joe Pesci is not the same person as Robin Williams, this is why memory is messed up—played some kind of magical bearded hobo who helped some Harvard student graduate from school or get a girlfriend or something. Also, while part of my brain knew perfectly well that the Sean Connery proto-memes “You’re the man now, dog” and “Punch the keys, for God’s sake” originated in the other half of Gus Van Sant’s fin-de-siècle flirtation with mainstream Hollywood, Finding Forrester, some other, stupider part of my brain believed these risible lines were delivered by the Robin Williams hobo-janitor in Good Will Hunting.

In the intervening years, I never felt any compulsion to catch up with that damn hobo-janitor. Add to that my wariness of that era’s Oscar favorites (I guarantee you will not see a “Film Dunce” feature on Shakespeare in Love from me), and Good Will Hunting was clearly never a priority, nor even a presence, on my program of what to watch. But now, after debunking those pseudo-memories, I am forced to reckon with the reality of a film that enraptured moviegoers in the awards season of 1997-98, and allowed Matt Damon and Ben Affleck to be forever credited in trailers as Academy Award winners. 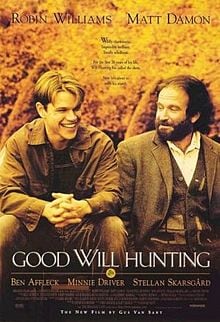 Deeply earnest, impossibly young Matt and Ben… am I really going to spend my time and yours, in 2012, taking those guys down a notch? Seems ornery, I know. But for all its sincerity and charm, Good Will Hunting can be weirdly heavy-handed, squandering a great character idea on a trite, schematic self-actualization narrative. Will Hunting is instantly compelling—an amateur polymath genius brawler janitor from the mean streets of south Boston, resisting the pressures imposed by his own talent. David Foster Wallace, himself something of a reluctant genius, was on record as an admirer of the movie, and I can see why he identified with Will’s conflicted psyche. But Damon and Affleck spent years developing the screenplay, and the superannuated effort shows in all the wrong ways. Every scene—or at least every scene after Robin Williams shows up—feeds into the schema that pushes Will along the dully epiphanic path to self-improvement, never really pausing to observe the fine grain of his existence. I’d probably have loved an iteration of this movie that chucked the therapy angle and marinated in Will’s dualistic life, half boy-genius and half Southie punk, without imposing a crowd-pleasing transformation on it. But as it is, the climactic forced catharsis and ready-for-the-future coda are nowhere near as emotionally rewarding as the video of a solitary, white-suited Elliott Smith’s heart-stopping performance of “Miss Misery,” on this film’s behalf, at the ’98 Oscars.

It doesn’t help that Gus Van Sant fails to sing Damon and Affleck’s overwritten tune in his own voice. Other than an early streetfighting scene with some stylish speed effects, Van Sant keeps himself hidden. It’s sort of mind-blowing to realize that, only a few years later, the director and writer-star of this Oscar-friendly crowd-pleaser would collaborate on a challenging, brilliant art film like Gerry. If the success of Good Will Hunting made Gerry possible—not to mention the other future triumphs of the key collaborators—then I ought to show it a little more gratitude. But if the Van Sant of today (having returned to personal cinema, at least sporadically), the Damon of today (paragon of A-list Hollywood virtue and artistic integrity), and even the Affleck of today (reborn as a director of legitimate talent) released something as overdetermined and ultimately fluffy as Good Will Hunting, I think the predominant response would be closer to disappointment than celebration. Still, I’m glad to have corrected the bungling of my memory, even if I’d have had more fun with the mythical hobo-janitor.