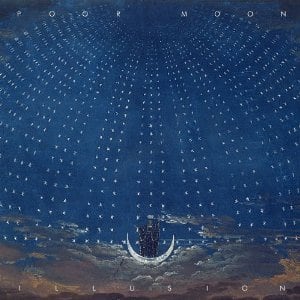 [xrr rating=3.5/5]“Poor Moon” – the name of this band alone makes me feel pouty and crestfallen; my first instinct upon hearing those words is to nod empathetically and say, “I know.” Apparently Fleet Foxes’ Christian Wargo feels the same cosmic despondency, naming this side project ensemble after the title of a Canned Heat song that frets over the mortality of our lunar companion. Together with fellow Fox Casey Wescott and brothers Ian and Peter Murray (members of little-known Seattle band the Christmas Cards) the songs of Poor Moon’s EP Illusion have been rumbling about for an incredibly long time, as far back as when Wargo and Wescott were touring in support of Fleet Foxes’ full-length debut in 2008.

Subsequent trading of tracks across the years and miles has resulted in this humble pen pal project, a 16-or-so minute collection of handsome reachback folk-pop. Since this kind of thing is Fleet Foxes’ stock in trade, the attractions of Poor Moon are as predictable as the tidal pull. The opening arpeggios of the title track have us wondering if that guitar is not actually a harp, so resonant and glistening are the dewy plucks. Drums support but don’t drive, rhythm is on its best behavior here. Surely there are some yarn covered mallets and brushes in that kit bag. And, of course, those harmonies: the kind that remind us of the natural elements, in particular the forest floor, in particular the loamy smell of damp bark and pine needles. Most movingly invoked on “Widow” (a bereavement song, as you might guess), the layered oooohs rise and wind like a leaf carried along by the breeze, creating a fretful tension between encircling harmonies and lyrics of loss like, “Dug her hands into the ground/ And quickly lost the taste for moving dirt around.”

The middle triad of songs on Illusion – “Anyplace,” “People in Her Mind,” “Once Before” – represent a ‘60s folk-inspired tepid kind of pop, a reimagined Simon & Garfunkel vibe that, though demure, allows for a little quickening in the steps. Plugging in the amp, writing in some vibraphone and glockenspiel, wriggling up into falsetto – these are the little pleasures found within.

And it is a pleasurable time spent, though these side projects often are met with their own set of expectations, and failure to mystify is unfairly cited as proof of mediocrity. Poor Moon is neither experimental, nor individualistic, nor reaching, nor surprising. But that this Fleet Foxes spin-off is most aptly comparable to, well, Fleet Foxes – in my book there are worse offenses. Whether out of a completionist’s compulsion to collect or a dabbler’s foray into a waterglobe’s measure of songs, Poor Moon’s Illusion is at least a manageable enchantment.