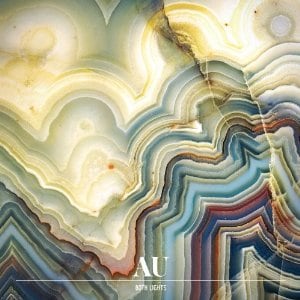 [xrr rating=2.75/5]Portland’s energetic duo gives us Both Lights, a bombastic avant-pop record that pours uproariously out of each waking second for a fully Technicolor ride, as the follow-up to 2009’s Versions. Where on Versions vocalist and multi-instrumentalist Luke Wyland and long time collaborator Dana Valatka were working out multiple ideas of the same set of songs, AU’s Both Lights is their most kaleidoscopic effort yet.

Their sound continues to reach hyperbolic boundaries, combining restless live percussion, angelic vocals from Wyland (and guests including recurring AU contributor Sarah Winchester) and pedal-rigged samplers and keyboards. AU is still striving to carve something picturesque this time around, but it’s not cinematic. It’s closer to a sped-up audio experience of a parade or a carnival as imaginatively demonstrated by Wyland’s preferred Nord keyboards and the careful tumbling of upbeat crashes of cymbals from Valatka.

Both Lights comes at a strange time though. Still trying to shake mostly imprecise associations to early Grizzy Bear and pre-arena era Animal Collective, they often sound like something that has risen from the tail-end of that last wave of indie acts experimenting with dance elements. The wholesome, undistorted rock music bred in the Pacific Northwest that creatively imitates orchestral-sized instrumentation can sometimes run into this wall. The marriage of these things, for instance, on Both Lights painfully recalls the more moveable moments of forbearers Belle & Sebastian and Arcade Fire who both successfully forged almost literal dance tracks, “Your Cover’s Blown” and “Rebellion (Lies),” respectively. For AU this formula takes place at about 220 BPM, save for the quiet kiss off “Old Friend.”

The structure of AU songs is what makes them so compelling for fans but obnoxious for others. Figures of instrumentation matched with Wyland’s groan or Chris Martin’s moan, wax and wane before you can engage, as heard on “Crazy Idol” or single “Solid Gold.” Wyland’s vocal melodies are dramatic, his voice pulling at the words while everything else unfolds unpredictably around him. The well recorded timpani drops and brass sections, including pieces of Colin Stetson’s sax-work tooted about here and there, make your first listen of Both Lights feel more like you’re standing in front of collage rather than a painting. The constituent parts of this work, and their sometimes chaotic arrangement, have a piecemeal effect on any meaning one could derive of it all.

The piano piece on “M. Sea,” however does offer some solace until the optimist’s onslaught that is “Solid Gold” ensues. “Solid Gold” – which reminds me of being at my last Dan Deacon concert, running around in circles with strangers following a glow-in-the-dark skull strapped to a broom head – is no doubt impressive. It’s just hard to follow. For moments like this on Both Lights, AU renders that fun, frantic electro-mess Deacon is so good at conjuring, but only for a moment until we’re hearing big-band horns and folky female vocals. It’s kind of like being stuck on the wash-cycle inside the deeps of Wyland and Valatka’s R.E.M. cycled dreams. The hands on the AU watch are revolving topsy-turvy in a marvelously colorful sound world.