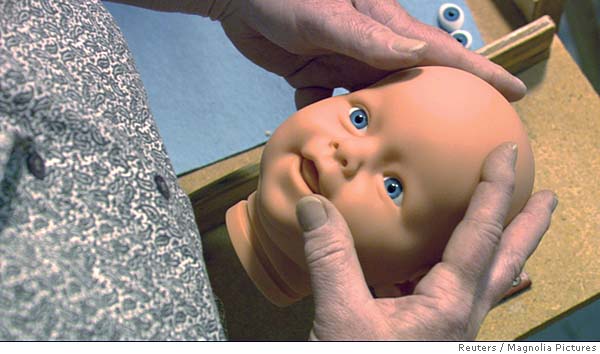 The 2000s were a decade defined by a tectonic shift in the distribution methods of media, one that saw the advent of iPods, DVR and Netflix. HDTV and Blu-Ray made the at-home cinematic experience more comparable to the silver screen than ever before. In January of 2006, director Steven Soderbergh concurrently debuted his minimalist gem Bubble in select theaters and on HDNet cable. Further bucking convention, the film was released on DVD four days after its theatrical launch. This experimental mode of distribution so defied cinematic protocol that a number of theater owners actually refused to screen it.

While Soderbergh’s roguish experiment may have allowed for greater accessibility than if he’d circulated the film through the festival and indie theater rounds, Bubble eventually joined so many other forgotten indie projects in the haze of obscurity. After all, none of the characters are played by trained actors, so it’s not like their names or faces would pop up in any tabloids. During the brief shoot in 2005, Soderbergh was still swimming in the windfall of the star-studded Ocean’s Twelve, so filming a 72-minute experiment in which actual laypeople improvised their own dialogue wasn’t going to break him. Moreover, Soderbergh has made a career of oscillating between cavorting with megastars and directing small budget indies (Schizopolis, Sex, Lies, and Videotape).

Shot for a mere $1.6 million (and drawing in less than $150K at the box office, likely due to its availability elsewhere) Bubble focuses on the lives of three factory workers in a dead end Rust Belt town. They go about their mundane existences mostly oblivious to any other way of life until, one day, a shocking murder uproots everything. Martha (Debbie Doebereiner), who’s middle-aged and overweight, cares for her elderly father when she’s not airbrushing facial features onto doll heads at the factory or carting around her car-less co-worker and only friend Kyle (Dustin Ashley). Kyle’s in his early 20s and still lives in his mom’s trailer. He’s pathologically shy and nearly monosyllabic. When he does speak, his face barely moves, but he gladly carpools and eats lunch with Martha, humoring her when she pries into his personal life perhaps because she’s his only friend too. 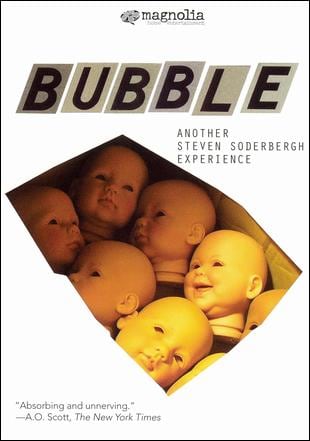 Enter Rose (Misty Wilkins). She’s about Kyle’s age and didn’t graduate from high school either, though her excuse is a rebellious streak and not crippling social anxiety. She’s brought on board to help with the increasing doll quota and is slightly worldlier than the other two, having once hitchhiked to Charleston in her teens. Martha eyes her slantwise from the start, suspicious of Rose’s motives and obviously threatened that her exclusive platonic attention from Kyle will be undermined. But soon she’s driving Rose around too and is shocked that Rose makes a habit of bathing in homes she’s commissioned to clean for her second job. Still, Martha is a giver and can’t refuse when Rose asks her to babysit her two-year old daughter.

And then, of course, there’s the murder. I won’t spoil it for the many who have yet to see this remarkable film. Even the detective brought in to solve the case (Decker Moody) is a real life police investigator, and his effectively cut-and-dry approach to catching a killer makes the majority of cinematic crime scene investigators look downright histrionic. And that’s the hypnotic quality of Bubble: its authenticity. Doebereiner was a 24-year veteran of KFC prior to filming. Wilkins’ own toddler played her daughter in the film. The dialogue is sparse and facial expressions nearly nonexistent, but the pent-up emotion hiding behind the eyes of this unfortunate trio could fill books.

Soderbergh often leaves the camera fixed in place for long, distant takes, which creates a sense of detachment from the action, one that reflects the characters’ own disconnect from their respectively depressing lives. There’s no orchestral swells to note when moments of conflict are approaching, and the absence of obvious cues manages to ramp up the tension. Other than occasional strums of an acoustic guitar, the majority of non-vocal sound in the film consists of factory machinery hissing and clanging and burping out doll heads.

Speaking of which, the decision to make the factory of the doll-manufacturing variety was a masterstroke by Soderbergh. It’s less obviously visceral than, say, a sausage factory, yet still generates an eerie tension. And by creating synthetic people together (Kyle operates the press, the women add the features) the triangle of co-workers takes on an evolutionary metaphor that works marvelously.

Bubble shuns the melodramatic flourishes of most filmmaking and confronts reality, which when framed in this way makes it all the more artistic. Soderbergh’s unique distribution strategy may not have caught on, but his perpetual willingness to step outside of insular Hollywood studios to tinker with cinematic mad science continues to make the movies a more interesting place.