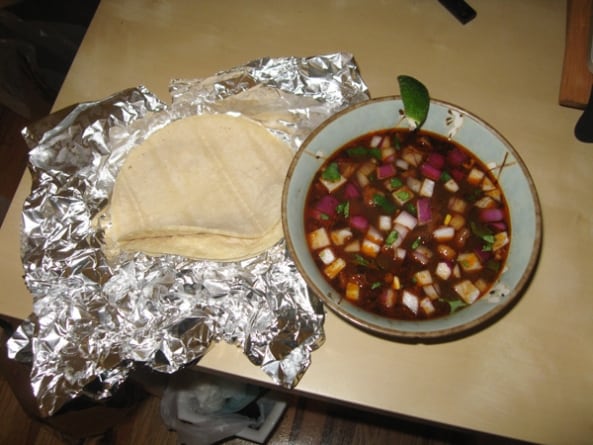 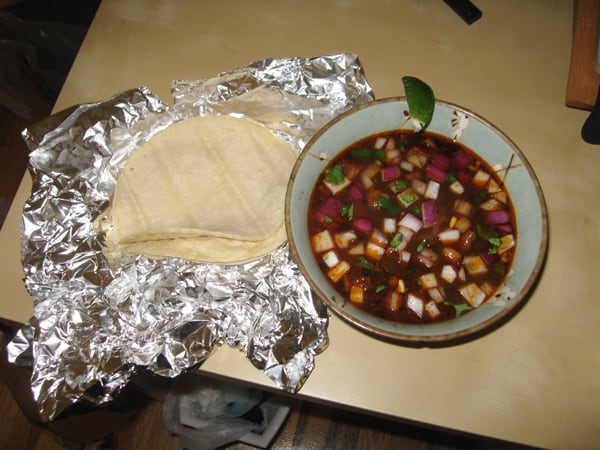 Living in a West Indian neighborhood, I see all sorts of strange preserved fish and offal in the stores. I often want to buy a piece of meat that I’ve never used and make a dish with it, but I rarely do. I’m not always up to the challenge or I can’t be bothered to do some research. So when I was looking at Keller’s cookbooks, his tripe recipes jumped out at me; finally, a reason to buy it! I decided to marry Keller’s techniques with menudo (Mexican tripe stew), an excuse to buy all sorts of Mexican ingredients in my neighborhood that I never had before.

Most menudo recipes call for the broth to be made almost strictly from the tripe and pig’s feet or a calf foot, maybe some aromatic spices. I stuck with Keller’s technique of using carrots, onions and leeks to flavor the broth, but I omitted the apples. I put a layer of the vegetables in the bottom of the stockpot and nestled two pig’s feet in with them. Then I placed a layer of tripe down, and I repeated (omitting pig’s feet) twice more.

At this point Keller recommends using white wine and veal stock instead of water. I thought that wouldn’t mix well with the chilis, so I stuck with water, spices and garlic. I covered the pot with a parchment lid and brought it to a simmer. Leaving the parchment lid on, I put a tight fitting lid on the pot and stuck it in the oven at 275˚ for six hours.

While that was cooking, I made my chili sauce. I reconstituted a bag of dried Ancho chiles, then removed the stems and seeds. I pureed the chiles with garlic, cumin, vinegar, oregano, sugar and put it in the fridge.

After the six hours was up, I stuck the pot in the fridge right away for about an hour, to get it to cool as quickly as I possibly could. After that, I carefully strained the liquid into another pot, reserving the pig’s feet and the tripe. I ran my fingers down the tripe over the liquid, getting as much excess juice off as I could. I took the meat off the pig’s feet and cut it into bite size pieces and added it to the liquid. I did the same with the tripe.

While the mixture was cooling in the fridge, I started my hominy. I placed a pig’s trotter, salt and four Chiles de árbol (reconstituted, stemmed, seeded and cut into small rings) into a pot, dumped a big can of hominy in, covered with water and let it cook through.

With everything finished, I added the hominy and chili sauce to the pot. I warmed the soup, stirring to make sure all the ingredients were evenly distributed. I served the dish with warm corn tortillas, lime wedges, diced onion and cilantro. I would’ve liked to make more chili sauce, so each portion could be adjusted according to taste.

Unfortunately, following half of Keller’s technique of cooking the tripe didn’t work well for this dish. Since I used a parchment lid, no liquid actually evaporated; ergo the liquid never reduced. Keller knew this and tells us to add a thickener before serving his dish. I didn’t think a slurry or a roux would have mixed well with the tastes of the menudo, so I just left the soup boiling for awhile so it would reduce into a thicker texture that seemed more suited to the dish. Despite that, Keller, with his signature simpleness, reduced the cooking of an intimidating ingredient into an easy process that I would not hesitate into preparing again.

1 large can of hominy, drained and rinsed

For the chili sauce

Tris Miller works at a New York City institution and enjoys yelling at slow moving tourists, as well as some clueless residents. He holds a completely useful and productive degree in history from Northeastern University in Boston. When he’s not stuffing his face at one of the city’s billion restaurants, he enjoys reading dystopian fiction, trying to find a movie with a pulse of originality, and listening to gigs of backlogged music. He is currently trying to learn French and failing.