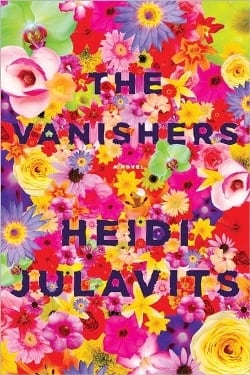 [xrr rating=4.0/5]Give Heidi Julavits credit for swagger. In The Vanishers, she walks right up to the endless trend of paranormal/fantasy/genre saturation in fiction, and then promptly turns around and heads in another direction—in a dozen different directions, actually. The fourth novel by the co-editor of The Believer magazine is a multi-headed beast with exploratory narrative tentacles, lunging quickly but haphazardly toward destinations unknown. I wouldn’t go so far as to claim that the book’s supernatural basis—a psychic woman victimized by a “psychic attack,” in a world where such phenomena are evidently accepted as reality—is entirely immaterial; it has plenty of metaphorical value, if nothing else. But Julavits covers so much imaginative and emotional territory that no tired conversation about the crossover—or division, or tension, or whatever—between “genre” and “literary” fiction can possibly contain her multitudes.

A less ambitious novelist might have been content to coast on the initial Vanishers premise: metaphysical warfare within an educational institute for psychics. If Julavits had stopped there, she might have ended up with something like Lev Grossman’s The Magicians, a serviceable but unilluminating mash-up of fantasy and campus novel. But from that starting point, Julavits branches off into an increasingly convoluted—yet always light and fleet-footed—web of odd narrative items: a shady corporation that facilitates “vanishing” from society; an avant-garde feminist filmmaker who may or may not have produced snuff films; a creepy trend of “surgical impersonators” who go under the knife to be remade in the image of dead people; porno, suicide, an unexplained obsession with chairs, secret European rehab centers, and even a form of time travel.

The book’s slim frame—under 300 pages—can’t fully support so much story, even in the shape of an absorbing mystery, but watching Julavits and her young narrator Julia Severn try to connect the dots is a pleasure in its own right. Equally pleasurable is Julavits’ style; her exacting yet breezy sentences often startle with their perceptive wit. “She seemed more impressed with herself for liking me than with me for being likable,” Julia quips after receiving an ostensible compliment, and in this line we see both the character’s guarded paranoia and the author’s flair for clever reversals and fresh perspectives. Julavits leans heavily on sharp dialogue and, to maintain a brisk pace, frequent paragraph breaks—the prose equivalent of fast cutting in cinema. It’s also one of the few contemporary novels I’ve read that truthfully incorporates chronic internet use into its narrative fabric without using it as grist for some grand thematic statement.

Anchoring the plot’s elaborate wackiness is Julia’s earnest struggle with the legacy of her mother’s untimely death—the most prominent of her numerous conflicts with older women, who continue manipulating her even as she keeps globe-hopping around to evade them. It’s here, in the book’s knotty relationships between women, that Julavits seems to be writing the world’s most twisted, subversive piece of chick-lit—a Jodi Picoult novel rewritten by Thomas Pynchon. In this context, the paranormal element conveniently collapses boundaries, allowing Julavits to highlight and heighten women’s projects of mutual harm and the psychological clusterfuck of mourning. Don DeLillo famously wrote of “how the dead speak to the living”—for him it was a supermarket barcode scanner, but for Julavits it’s more internal. In The Vanishers, nobody can ever really vanish, and grief itself might be a supernatural act.