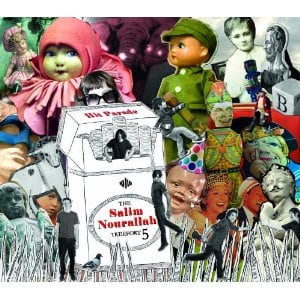 [xrr rating=2.0/5]The joys of true love and domesticity have long been the subjects of song, often the domain of aging musicians who’ve exchanged youthful rebellion for, to borrow a phrase, a quiet normal life. Songs of wedded bliss, playing with the children and sunny skies filled with butterflies might be great for an artist’s mental health, but for listeners they can be pure torture. Not to suggest that musicians don’t deserve lives of contentment – of course they do – but too frequently artists struggle to express such happiness without sounding sappy or trite. Misery plays much better.

Such is what makes portions of Salim Nourallah’s Hit Parade – a tedious example of recycled Americana and generic singer-songwriter pop – an agonizing album from start to finish. Opening song “38 Rue De Sévigné” immediately exposes all of Hit Parade’s flaws: punchless, derivative instrumentals, cliché-riddled lyrics (“love is binding”) and a strategically scratchy singing voice that miraculously cracks at certain uber-emotional points and sounds beyond affected. To prove it’s no fluke, Nourallah repeats all of this on closing track “Miette,” thus bookending the album with a pair of feeble duds. “Unstoppable,” sung from the point of view of a father wondering what the future holds for his son, is set to an arrangement that’s the stuff of an ABC Family Channel sitcom; this is not meant as a compliment.

Nourallah likewise fails when he tries to get even minimally pissed off. “The Quitter” contains so many mild putdowns that it’s almost laughable, like being insulted by a really nice guy who just can’t bring himself to get truly angry. This is even more obvious on “Everybody Knows,” where the gripes (“look at the way you bullied the meek/ Look at the way that you cheated you cheat”) feel spineless and without conviction, as if Nourallah’s planning to run for cover right after lobbing a few of these mini-attacks. Humor isn’t handled any more deftly on Hit Parade – witness the bland dance floor satire of “Travolta” – and where to start with “Never Felt Better”? Not sure: I guess Nourallah lost me at this line: “We used to be so young/ Chewin’ up the world like bits of bubblegum.” And you that shit sticks to your shoes.

Nearly lost amid all this gunk are two powerful, genuinely moving songs. Both the title song and especially the starkly executed “Friends for Life” are surprisingly touching, exploring themes of mortality, loss and memory and never resorting to the type of aphoristic lyrics that ruin the album. A shame there isn’t more like them on Hit Parade, as most of the time Nourallah resorts to verbose, heavy-handed lines as if on command. No one expects artists to always deal in yelling and screaming and bitter dissent, but if you want to sing about the wonders of love and fatherhood while casually tossing off a couple small jabs at people along the way, it needs to be said somewhat poetically or with a musical backing that offers something unique. There’s very little of that here; Hit Parade is simply an album of dull edges and pedestrian sentiments.