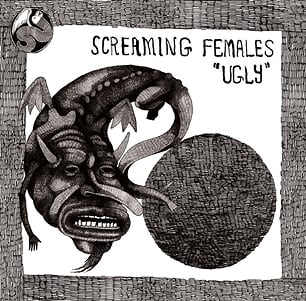 [xrr rating=3.75/5]Marissa Paternoster is one of the most mind-blowingly gifted guitar shredders in indie music. She, along with fellow Screaming Females Mike Rickenbacker (bass) and Jarrett Dougherty (drums), proves that there’s still a place for straightforward, balls-to-the-walls rock ‘n’ roll.

Ugly, the New Jersey trio’s fifth LP, is akin to recent releases from The Men (Open Your Heart) and Cloud Nothings (Attack On Memory) in that they all rock out without much studio trickery or sonic enhancement. It’s no coincidence that Attack On Memory and Ugly were both produced by one Steve Albini. Cloud Nothings and Screaming Females sound quite a bit brighter on their most recent releases, an obvious artifact of Albini’s influence. As he did with Cloud Nothings, the producer inspired Paternoster and company to stretch out, expanding song forms and playing longer solos. While Ugly is by no means a perfect record, it’s Screaming Females’ most adventurous effort to date. Its punk attitude and killer riffs get under your skin.

Despite the buzz Paternoster has gotten for her mad guitar chops, her quirky vocal style is probably Ugly’s most notable feature, especially for those not familiar with Screaming Females’ previous work. To say that the songstress’ screechy, vibrato-heavy voice is an acquired taste might be an understatement. It sounds like 15 semis simultaneously slamming on their worn-out brakes on the expressway, or a refreshingly unbridled, innocently barbaric yelp, depending on your mood and taste. The band name gives the group’s modus operandi away, although there’s notably only one band member who screams and is female. As divisive as Paternoster’s lead vocal might be, the slightly off-key instability reflects the record’s nihilistic lyrical content. One only needs to quickly skim the track listing to get an idea of what the band’s talking about here (for example, “It All Means Nothing,” “Rotten Apple,” “Extinction,” “Doom 84” and “Something Ugly”). Paternoster casts us into a world of failed relationships, mental instability and emotional frustration.

Ugly manages to give off a pretty perky vibe, despite its trafficking in these gloomy topics. It helps when Paternoster’s catchy, classic rock-inspired riffs are the most memorable aspects of almost every song. Without Rickenbacker and Dougherty’s relentless commitment to the groove, Paternoster’s guitar work wouldn’t soar the way it does. “Doom 84” is particularly notable for the way the bass line echoes and intertwines with the lead guitar, proving that Screaming Females operate as a cohesive band, not as a star guitarist with her two supporting players in the wings.

Although it’s admirable of Screaming Females to expand their song craft and improvisation, Ugly’s almost 55 minute running time makes the record a bit tedious near the end. The band has proven on previous releases that they can make an assertive statement in a short period of time, embracing a minimalist punk aesthetic. While the record doesn’t really contain any songs unworthy of release (album closer “It’s Nice,” an acoustic ballad complete with gaudy strings, might come close), many of the tracks could be pared down. A well-developed 30-second guitar solo can be more powerful than a two-minute guitar solo. After more than five years of bravely toiling in the punk/indie underground, though, if anyone deserves to indulge themselves a bit, it’s Screaming Females.