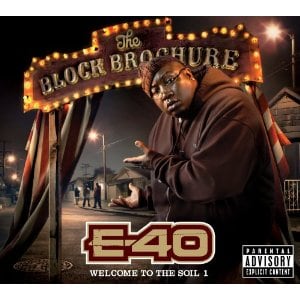 Vol. 1 [xrr rating=2.5/5]Vol. 2 [xrr rating=2.0/5] Vol. 3[xrr rating=3.0/5]A regular on rap’s many “most underrated” and “most prolific” lists, slang sculpting Bay Area elder-statesman E-40 is back this spring with another multi-album release. While 2010 and 2011 had both seen the man release two albums on the same day, this year 40 goes one step further and drops three volumes of The Block Brochure: Welcome to the Soil. While most rap double discs have notoriously suffered, 40’s shown in the past he knows how to craft quality multi-albums as all four entries into his Revenue Retrievin’ series stand on their own among the best of his most recent output. Unfortunately, here on his 15th, 16th and 17th solo albums, the hardest working man in rap’s overtime isn’t as rewarding.

It should be stated that all three entries are full-length albums. Each are over 70 minutes long and do not contain a single skit. As a longtime 40 fan, I welcome the idea of having roughly four hours’ worth of new music, especially considering how much I enjoyed last year’s installments. However, whereas each entry in his Revenue Retrievin’ series was an album in the traditional sense of having a cohesive theme and feel, after several re-listens I’m still struggling with what separates one Block Brochure from another. To the best of my deduction, it seems Welcome to the Soil implies all of California’s rich hip-hop history, letting each volume feature the present (Volume 1’s appearances from Turf Talk and Mistah F.A.B.), the past (Volume 2’s welcome longtime favorites in JT the Bigga Figga, Spice 1 and Andre Nickatina) and the dream pairings (Volume 3’s star-studded Snoop Dogg, Hieroglyphics and Kendrick Lamar). The albums each vaguely share a sound from these eras/concepts, but factoring in the guests and songs that don’t quite fit these parameters, my estimations might be far off and each record’s song selections could very well be completely arbitrary.

If E-40 can be relied on for one thing, it’s the best opening tracks in rap. Volume 1 begins with the brooding paranoia of “Fast Lane,” accurately establishing the streets where his rapping takes place and bringing potential new listeners up to speed on exactly who E-40 is. Volume 2’s “I’m Laced” puts the MC over an adrenaline pumping DJ Fresh production that rattles with the best of the man’s work. “Jealous,” off Volume 3, sets the tone for where 40 goes on the final installment, consistently innovating both his language and his region’s sound. The latter is the only one really indicative of its disc’s collection as both Volumes 1 and 2 go completely off the rails.

40 himself describes his style on the albums as “not for everybody” and “an acquired taste,” which is true, but he has also made it a point in the past to best utilize his guest appearances to keep the flow of his albums from becoming overbearing. While a lot of these work, namely frequent collaborator Too Short on Volume 3’s surprisingly inspirational “Be You” and the numerous up-and-coming artists 40 likes to include across all three volumes (something most rap artists should consider doing instead of bitching about their hometowns on Twitter), there are a few clunkers. 40’s usually had great chemistry in the past with both T-Pain (2008’s “Give Her the Keys” being the template for how to best use the singer) and Kansas City underground icon Tech N9ne (2005’s “Jellysickle” successfully cross-pollinated both fanbases in a way few rap duets find success in) but their team-ups on The Block Brochure just don’t click like they should. Perhaps it might be the additions to these tracks of Twista and Brother Lynch Hung, two artists with such signature sounds that in order to house everybody, the tracks become diluted and obscure what makes each artist great.

That’s precisely the problem with having The Block Brochure being an underwhelming trilogy instead of a very good double disc or exceptional single album. Here 40’s overworked himself and, by having to make every type of song to fill up all 240 minutes, is inadvertently making some of the exact same types of songs he defected from a major label to avoid. Only Volume 3 really feels like a full-fledged 40 banger, and even here there’s the Warren G produced “What Happened to Them Days” and the tribute to his mother “Salute You,” both songs with strong concepts but unfortunately arriving at the tail end of such an epic saga that a spent 40 musters uninspired lyrics which would never fly on any other of his releases. While each has a handful of great moments, Volume 3 is the only one I can recommend to anyone outside of E-40 completionists. Thankfully, it’s enough quality 40 to hold us over until next spring.