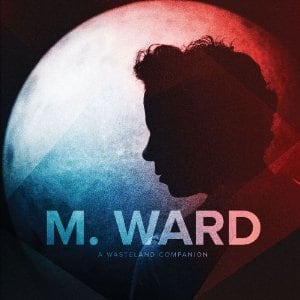 [xrr rating=3.75/5]In Portland, pretty much everyone has an M. Ward story. As one of our favorite sons, it’s not hard to get an “oh yeah, I saw him before…” “I heard he was recording just up the street” or in my case, “I bumped into him while I was saying hi to a friendly dog on the sidewalk” around here. Perhaps it’s his mellowness that makes these stories popular, the sense that he could be as laidback as a person as his music sometimes is. Not that he gives off the sense of being barely awake like Jack Johnson, but in that Ward’s music often feels calm and gentle, something that you can sink into while listening. On his new record A Wasteland Companion, he largely sticks to the meticulous guitar work and songwriting he’s known for, while the few deviations don’t pan out all that well.

His seventh solo album, A Wasteland Companion was recorded in eight different studios and with a bevy of guest musicians, but it never feels like anything but the M. Ward show. Despite the presence of members of Sonic Youth, Devotchka, Bright Eyes and Dr. Dog, no presence or instrumentation overshadows Ward. Even his companion in She & Him, Zooey Deschanel, while featured prominently on two songs, takes a backseat, largely contributing her distinctive voice to backing vocals. But the album does show its collective contributions and scattered production process in tone and mood shifts, which are surprisingly diverse for the first few tracks and then quickly chill out for the remainder of the album.

The first track “Clean Slate (For Alex & El Good)” is classic Ward (and presumably a tribute to the late Alex Chilton, star of Big Star), a delicate acoustic guitar melody and hushed, relaxed vocals. It’s a breezy, wistful song and a good indicator of the album as a whole. The next track, however, throws what seems to be a curve into the mix, albeit briefly. “Primitive Girl” is driven by a bright, joyful piano hook and pounding drums, a love paean that wouldn’t sound out of place in an early Modern Lovers compilation. The following two songs (both featuring Deschanel) are two of the weakest on the album, “Me & My Shadow” curiously bisected into two very different sections of acoustic guitar and sinister fuzz. “Sweetheart” is slightly better, with a country twang and Deschanel’s coos giving some life to an otherwise forgettable melody.

The rest of the album reverts to the gentle melodies of the first track, and much improves for it. “The First Time I Ran Away” has a wistful, nearly jazzy feel to it, much like Van Morrison in the Astral Weeks years. “Wild Goose” is startling expansive, lapsteel and soaring instrumentation giving Ward’s voice a grander tone that his limited vocals usually lack. A Wasteland Companion is not the kind of album that’s likely to make new M. Ward fans (that’s what She & Him is for, right?), and a few tracks may throw off longtime fans. But it’s still a strong collection of songs by a masterful crafter of music, one willing to tinker with formula even if it doesn’t always get results.