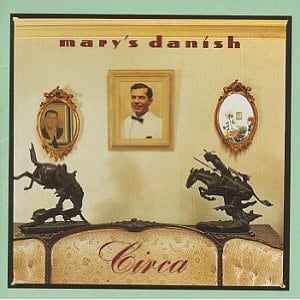 This is where I settle my La-Z-Boy into the reclining position, tucking an afghan under my lap as I spin a yarn about the salad days when compact discs were packaged in long cardboard boxes and favorite songs were often found by flipping to Side B. So much of the good things in life went down at the record store: allegiances were formed, romances were kindled, tastes were made. Systematic browsing as a way of life. So it was that 20 years ago (every time, I do the math again, hoping I’m wrong), I serendipitously put a copy of Circa by Mary’s Danish into my buy pile. It was a bit of an odd duck; far from depressive Brits or college radio phenoms, their self-certain blend of guitar rock, funk, country and punk was off-center of the zeitgeist of the early ‘90s. That MTV aired the video for “Don’t Crash the Car Tonight” – their debut album’s first single – made them tangentially relevant, and the early buzz accelerated as the band played an opening slot in the Red Hot Chili Peppers’ Mother’s Milk tour. Released in 1991, Circa was the middle album of the band’s truncated three LP career, best representing everything that made Mary’s Danish a dynamic if woefully underappreciated band.

“Julie’s Blanket” was the lead single from Circa, an unconventional choice given that the verses – lyrics sounding much like a nursery rhyme with fangs – are recited in an ambiguously witchy sing-song cadence, a forked tongue’s hiss on some of the sibilant sounds. In some ways, though, “Julie’s Blanket” is emblematic of the kind of collection Circa is: fully committed to the eclectic and self-indulgent in the best possible light, each of these 17 songs goes for broke. Vocalists Julie Ritter and Gretchen Seager led the band and ricocheted off of each other, often singing a unison melody one octave apart as on the cling-clang cowbell funk of “These Are All the Shapes Nevada Could Have Been” or during their brazenly jubilant cover of Jimi Hendrix’s “Foxy Lady” (titled Danish-style as “Foxey Lady”).

The conventional wisdom about covering a Jimi Hendrix song is basically this: go for it, but just know that yours will suck in comparison. And yet, Mary’s Danish put together such a reverently irreverent, horns-up, brights-on send-up of this classic, what they’ve done is somehow outrageously appropriate. The “TWO, THREE, FOUR” countdown is a hoarse ultra-holler that throws you down and picks you back up before the song even begins. The horn line blazes, the bass slaps, the ladies send their vocals rollicking and if that’s not enough, a tornado of guitar shredding is tied off with a 4 bar riff from Led Zeppelin’s “Dazed and Confused.” Any why not some Maynard Ferguson too? Those last sky-high, hella loud trumpet blasts would make the Birdland bandleader puff his cheeks out in approval.

The stage is not so crowded on other numbers – the downer ballads such as “Beat Me Up, ” “Hoof” and “Cover Your Face” let Ritter’s voice resonate vitally, convincingly, while the intermittent instrumentals (the frenetic and slobbering “Mr. Floosack,” the saxophone and guitar improv showcase “Tracy in the Bathroom Killing Thrills” and the kicking-a-can-down-a-dirt-road respite of “Down”) give the band opportunities to get a little ostentatious with their collar-grabbing virtuosity. “Louisiana,” is a personal favorite with the trombone swells emphasizing the imagery of “The river’s rising/ And the boats are coming down,” and Seager’s belting more powerful than any misbehaving tide or bayou brawl. When Ritter admits, “I used to be a skirtfull of hell,” in “Hellflower,” it’s asking a lot to believe she still isn’t.

Mary’s Danish was left to choke on the vine: after a series of near-negligent missteps by their foolhardy record label (invited to tour with Stone Temple Pilots, Morgan Creek Music Group saw fit to decline funding the outing) and consequential bad blood between the parties, the record label held the band to uphold the terms of a contract even though it made much more business sense to release them, a pissing match move that essentially held Mary’s Danish financially and creatively captive. The label imploded, the band dispersed into side projects and Mary’s Danish was left hermetically sealed back in 1993, a year after releasing Circa’s successor and their final LP, American Standard. Today, their catalog is unavailable on iTunes, presumably due to legal jockeying. That’s OK, as an old-head I prefer the disc to the download, but it pains me to know that contract law is what ultimately put the kibosh on the Danish. I wonder if Ritter, Seager and company listen to “Bombshell” still as eagerly as I do, finding premonitory solace in the words, “Well I try to prove them all wrong/ I put up a nasty fight/ I said I try to prove them all wrong/ But I just keep a-provin’ I’m right.”