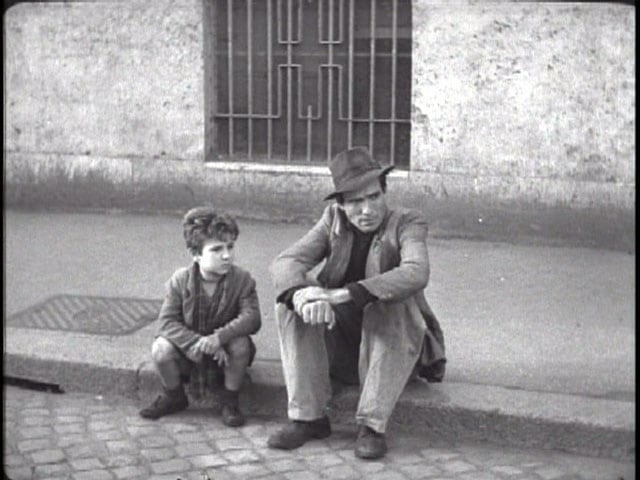 Today I confess, hesitantly, that I do not like Vittorio De Sica’s neorealist masterpiece Bicycle Thieves. That is difficult to admit not because I’m worried that I’ll be chased out of film fandom on the pointy end of a pitchfork – well, okay, I’m a little worried about that – but primarily because the film’s reputation is such that anyone who doesn’t like it is thought to heartless and cruel. Consider Pauline Kael’s reaction to De Sica’s Shoeshine (1946): “For if people cannot feel Shoeshine, what can they feel?” Much the same attitude accompanies Bicycle Thieves, and for much the same reason.

But to my eyes the film is excessively maudlin, engaging in an overabundance of despair and sadness that causes the audience to be overwhelmed, no longer acknowledging the reality of the situation and instead merely wallowing in emotions designed to be consumed rather than considered. Gloria Swanson once complained in an interview that films of the 1970’s were showing so much sex that audiences must be impotent if they needed that much stimulation. It’s delightfully hyperbolic, yet reflects how I feel about Bicycle Thieves: audiences must have been a bunch of stone-hearted bastards to need something so overtly sentimental to make them think about the plight of citizens dealing with desperate poverty in post-war Italy. For 64 years, reviewers have been telling readers that the story of Bicycle Thieves is simple. And that is true to an extent, but it is also reductionist. Bicycle Thieves is not a fable about an innocent man beaten down by circumstances over the course of 93 cinematic minutes, though I believe most people would disagree.

The film opens with Antonio Ricci (Lamberto Maggiorani) being offered a job to hang posters on the city walls of Rome. The job requires a bicycle but his has been pawned. He takes the job anyway, his wife hocks the family linens to get the bicycle out of the pawn shop, and the next day he happily goes off to work. The bicycle gets stolen early in the work day, however, leading Antonio to desperately search for it so he can keep his job. What was so striking and unexpected about Bicycle Thieves was how viscerally unlikable its lead was. The family lives in abject poverty in still-smoldering postwar Italy, and though there aren’t many good choices to be made in that environment, Antonio is still shown repeatedly making bad choices that are not in his own best interest. It is hard to see him as a man who is beaten down entirely by external forces when he is off daydreaming at the moment a job finally comes in. When he obviously does not have the bicycle required for the job, he lies to take the job anyway, preventing other men in straits as dire as his own from their chance at employment. 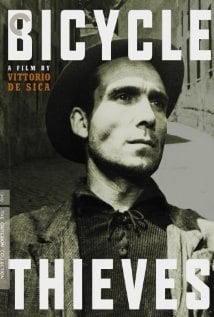 Antonio’s white lie about the bicycle is indicative of a necessary ruthlessness in the crushing poverty of post-war Italy, and thus is easily explained; less easily explained are the moments when he hits his nine year-old son Bruno (Enzo Staiola) or his obliviousness to his wife’s sacrifices. He interrupts her work by saying he desperately needs to talk, then immediately runs off, his melodramatics forcing her to run after him with a heavy load that he doesn’t notice because he’s so engrossed in his own problems. Mere moments after Maria (Lianella Carell) sacrifices part of her dowry to get the bicycle out of hock, Antonio leaves it unattended on the street. Antonio also refuses to allow Maria to pay a fortune teller the money she owes her. Antonio and his family, like everyone else around them, are scrabbling to survive, which is why he should know that if he’s willing to screw a fortune teller out of money or lie to obstruct others from employment, someone else is willing to steal his bike. But somehow he does not know this, and the bicycle is stolen. That it wasn’t stolen the first time he left it on the street was a miracle; that it gets stolen later is no surprise.

As Antonio, Bruno, their friend Baiocco and some of Baiocco’s co-workers search for the bicycle the next morning, they come upon on a man they believe has it. They gang up on him, bullying him a bit, and call the police to force him to prove the cycle’s his own. Because the sympathy lies with Antonio, the audience, consciously or not, finds this confrontation acceptable. It’s excused as Antonio being desperate and therefore justified in bothering this man who, after all, was doing nothing but painting his own bicycle on his own time. Later when Antonio is bullied by the thief’s friends and neighbors, the audience is again meant to sympathize with Antonio, despite Antonio and his friends having done the same earlier, though on a smaller scale.

It’s not a matter of right and wrong in Bicycle Thieves, it’s a matter of degrees. Everyone in this society is already beaten down when the film begins. They are already engaging in a little lying here, a little scheming there, and some overt disregard for others. The point of the film is that, in the reality of those trapped by poverty, there is no easily-definable line where one lie is acceptable while another lie is not, especially when those lies affect whether you can put food on the table at night. And it’s not about Antonio making poor choices and therefore deserving the disastrous repercussions. Bicycle Thieves shows us all that living in poverty means there is no buffer to shield us when we make a mistake. The tragedy is that for those in the lower rungs of society, one mistake, one careless moment or one bad idea leads to consequences that resonate throughout an entire lifetime.

Interestingly, critics and audiences often reject the gray areas in the film and instead decide, despite clear evidence to the contrary, that Antonio began as a nearly flawless man until circumstances changed him. That’s not true and, I think, not fair to the film. The character is real, not a mere cinematic metaphor. Its unflinching view of the complex situation makes this a revolutionary film, as does the casting. Director Vittorio De Sica hired amateurs with no acting experience, adding to the authenticity. Young Enzo Staiola’s turn as Bruno is extraordinary, and the actors’ ability to react naturally to circumstances prevents the film from turning into a turgid parable. Lamberto Maggiorani as Antonio, however, falls to the pathetic too often. He is not merely downtrodden but despondent, becoming exponentially wearier with every scene. The cinematography is a bit static and repetitive, with lingering shots that work beautifully sometimes but bog down the film. Alessandro Cicognini’s score is so manipulative it practically wrings our hands for us. The plot of Bicycle Thieves does not merely show life going from bad to worse, it goes from bad to disastrous to cataclysmic. Despite everything the film does well, it still employs all manner of obvious and distracting tricks to sway the audience. It’s not difficult to leave the film remembering more about how one felt than what one learned.

In Pygmalion, Alfred Doolittle cheerfully opines that the poverty-stricken cannot afford morals. The beauty of Bicycle Thieves is in showing this plainly and realistically; there’s no cushioning the blow of this truth by making its messenger a comedic character. Similarly, it is not watered down by portraying Antonio as a beaten-down saint. That would imply the focus on the film is on Antonio’s internal struggles alone, and also that the change in his circumstances could ostensibly be reversed. Neither is the case. We see Antonio battle with outside forces that negatively affect his internal beliefs, and when the film ends, we feel that while the movie may have stopped, the struggle of Antonio and his family never will.