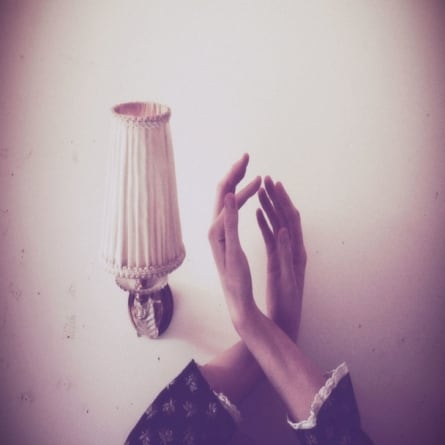 San Francisco’s dark prince Chris Greenspan, who calls himself oOoOO, gives us his second official release on the decidedly dark electronic imprint Tri Angle Records. Moody, delicate and cerebral, the recordings on this five song EP are of mostly impassioned software sounds that wind a sensual, eyes-closed experience. The title, Our Loving Is Hurting Us however, is as about as opaque as the narrative it implies.

The parsed lyrical elements on Our Loving are expressed similarly as they were on oOoOO’s first, self-titled EP. Chopped up found samples or breathy ethereal sighs from Laura Butterclock, Greenspan’s collaborator, fit neatly into the dark oOoOO sound pastiches. Opener “TryTry” lifts the record off with a confidence-leaking start and stop beat. Slow moving, it’s lightly painted with shakers and flickers of other sharply recorded gasps and tinkers. The spelling of the track “TryTry,” with the two words conjoined, weirdly mirrors the way the lyrics are articulated in the song, right up against each other.

At only 17 and a half minutes long, Our Loving Is Hurting Us withstands the pressurized nature of oOoOO, the elusive, hood brandishing man but also of oOoOO, the music project itself. Our Loving Is Hurting Us is shadowy, druggy and big on bass pounds that sustain the mystery of oOoOO. Single “NoWayBAck” is a writhing slow-jam that reappropriates synth pop melodies into something haunted, strange and unusual. Saved for last, it refocuses the EP to Berlin vocalist Laura Butterclock. Sometimes she lets off notes that render her a dead ringer for Grimes’ Claire Boucher, other times she forges her own glowing aesthetic, often sounding like a bodiless apparition of herself, her words “There’s no way back” floating over the shifting bass.

Festooned with snare drum blasts and reverse percussion like on “Springs” and “Break Yr Heart” as well as the super low-end digital bass as on “Starr,” oOoOO showcases his favorite tricks, integrating trills of sounds across disparate genres. On Our Loving Is Hurting Us oOoOO is still combining the best ingredients from Southern rap, ’90s R&B, techno and drag to create something new. There are oddities too that throw your ear, such as the bizarre guitar solo on “Starr.” Like his self-titled release in 2010, Our Loving makes it hard to imagine a full length album. Instead, Greenspan keeps it short and sweet, as though he doesn’t want to give too much away.