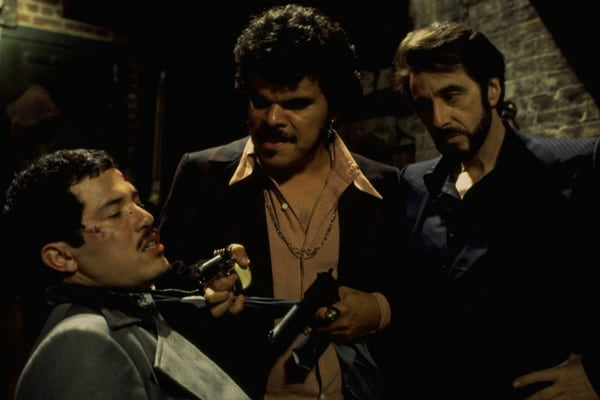 There’s an old saying: you can’t make an omelet without breaking a few eggs. Aside from being cynical propaganda distributed by the egg industry, there’s an essential problem with that idiom. The most ruthless omelet in the world is still going to be awful if it uses rotten eggs, takes forever to get through and is from a recipe by Oliver Stone. Such was the basis of the argument in my last installment of this feature, in which I took pains to point out the obvious: the 1983 Brian De Palma film Scarface is awful, despite all the talent present. But as pointlessly overrated as that film is, there’s a strangely similar movie made 10 years later that is as underrated as its idiot brother is praised. That movie is Carlito’s Way.

While Scarface has become a staple of rappers who have watched the first three-quarters of the movie and wallpaper for the unimaginative in colleges everywhere, Carlito’s Way has never achieved the same level of fame. And that’s completely undeserved. Part of this had to do with the timing of the film: in 1993, a decade after their earlier collaboration, director Brian De Palma and star Al Pacino were both at strange crossroads. De Palma had reached the apex of his career in Hollywood with The Untouchables (1987) and then fallen hard with legendary flop The Bonfire of the Vanities (1990), which lost millions and was savaged critically. Conversely, Pacino had spent some wilderness time with little remembered movies like Revolution before having a resurgence with Sea of Love, Dick Tracy and Glengarry Glen Ross, the latter two earning him Academy Award nominations, before finally winning Best Actor for Scent of a Woman. For both men, revisiting Spanish-speaking gangsters was viewed as one too many trips to the well. 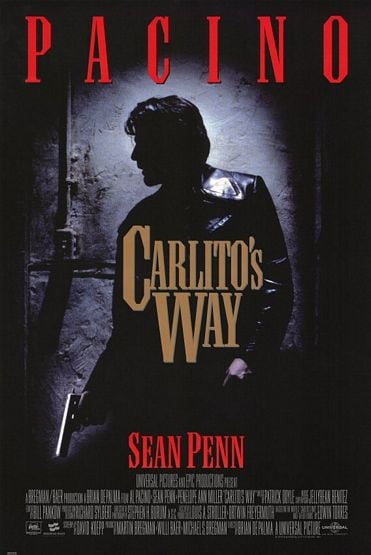 And Carlito’s Way is a far stronger film than it should be, if it were the rehash some critics cynically claimed it to be, as well as a more nuanced and emotional one than could be expected from the premise (which is based on a pair of novels by Edwin Torres and scripted by David Koepp). Carlito Brigante (Pacino) is a legendary New York City criminal fresh out of prison, five years of incarceration (out of a 30 sentence) having convinced him to stay clear of his previous career. Of course, this doesn’t come easy: almost immediately, his cousin Guajiro (John Ortiz) gets him involved in a drug deal gone sour, he needs to take over a nightclub owned by a gambling addict to facilitate his long-term plans of escape to the Caribbean, and oh, his best friend and attorney David Kleinfeld (a career best Sean Penn) is a crooked lawyer with a mean coke problem and a heavy debt to the Mob. As if that wasn’t enough, he has to deal with a younger version of himself, a young tough on the rise named Benny (John Leguizamo) who wants Carlito and his reputation on his side. It’s a classic story, the repentant man trying to escape who he once was and the continuing devastation of his mistakes, one that Hollywood loves to tell. But Carlito’s Way does something that movies about crime rarely do; rather than condemning or praising, it shows that its characters are people with lives and dreams.

Many films about the criminal life are populated by cops and robbers, villains to be punished for their sins and heroes to be praised for sticking to the straight and narrow. Carlito’s Way does not reward its titular character for trying to go straight, and he is himself his harshest critic. It’s a portrait of a man who began a life of crime for selfish reasons and who largely backslides to try to help others. If anything, it points out the ambiguity of decision, how helping a friend for the wrong reasons can lead to bloodshed, how showing mercy and sparing a life can lead to tragedy. Even the minor characters are given depth. Kleinfeld is a foolish man who creates his own fate, but he’s also a person who snaps under pressure and depression. It’s not as simple as that he represents bad people and is punished for it, and Penn perfectly plays him as one of life’s eternal losers, a man with bad hair and no respect, even at his most successful (and worst of all, he knows it). Benny Blanco from the Bronx (as he repeatedly styles himself) is a ruthless thug, but it’s hard not to see his point: he shows Carlito respect, he emulates him and wants what he once had. In return for his deference to underworld protocol, Carlito dismisses him, insults him and makes him look weak in an environment in which that’s fatal. Carlito’s Way even takes a brief moment in a scene with a pre-Aragorn Viggo Mortensen to demonstrate that that lowest of criminal archetypes, the snitch, is a man scared and just desperate to survive in difficult circumstances.

Both De Palma and Pacino put some of their strongest work in years to Carlito’s Way, and it shows. Even with the superb supporting cast, which aside from Penn and Leguizamo, includes Penelope Ann Miller, James Rebhorn and a surprisingly gangsta Luis Guzmán, the two men bring a depth to the movie that’s both startling and moving. The film is filled with the crisp, tense movement which is De Palma’s trademark, particularly the aforementioned drug deal gone bad and a bracing scene in which Benny Blanco takes a spill down some stairs and demonstrates how the director doesn’t always have to resort to hyper-violence to make you wince. Pacino, for his part, brings a mature melancholy to Carlito, as well as a simmering anger that hints just enough at the brutal man he once was. You can watch Carlito grow and change throughout the entirety of his story: the cockiness of his release from prison, the growing frustration he feels while trying to stay honest and the wistful sadness that descends when he finally loses his ultimate bid. Compared to the cardboard cutout that is Tony Montana, Carlito Brigante is an actual human, and he’s in the film that deserves to be remembered.