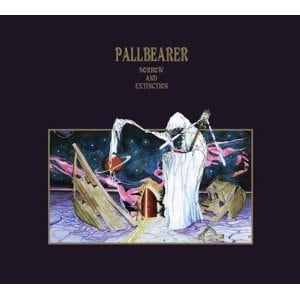 [xrr rating=4.25/5]The imagery and iconography surrounding metal can sometimes make finding pleasure in the music seem odd. While there are more than a few metal songs that we might conventionally label “uplifting,” the most adventurous and cherished metal of the last three decades has fixated on darker, sometimes unnervingly grim themes. Death metal, for instance, tends to explore the violence and bodily mortality that we turn away from in our everyday lives, often treating the body as mere meat for disassembly. Black metal, meanwhile, plunges into metaphysical evil as one of its well-worn themes, so much so that a few of its practitioners have dabbled in evil themselves, most notoriously actual acts of murder or church burnings. And then there’s doom metal, a crushingly heavy strand that prizes a sense of despair so lumbering that outsiders might balk at the idea of people finding enjoyment in it. But metal fans do actually savor doom done right, the kind you find, for example, on the debut album of Arkansas quartet Pallbearer. In their hands, doom becomes cosmic and transcendent. The word “doom” may connote the total assurance of some terrible fate, but the music on Sorrow and Extinction is interesting precisely because it suggests the redemption that might be found in how we choose to confront this fate.

As if in firm opposition to this overbearing sense of doom, Pallbearer’s music sounds like the product of struggle. One imagines the band emerging from their recording studio dripping with sweat, their muscles worn down in a heroic effort to wrestle music out of their instruments powerful enough that it will overwhelm not only the listener but also themselves. Each guitar or bass note and each drum hit sounds like an event all its own, a climactic victory in microcosm, because unlike music that establishes a more regular groove, Pallbearer tends to grind out rhythms only provisionally, snail-paced and always threatening total collapse. This is audible even in the acoustic guitar strumming that opens the album, which sounds defeated and resigned, as though struggling to maintain pursuit of its melody. The space between notes is elongated so as to dare its own entropic destruction, conveying stoic acceptance of the inevitable. Sorrow and Extinction sounds so physically weary that we might feel its mere existence is itself something of an achievement, a victory for a band pitted against slabs of monolithic sound too overwhelming to be treated lightly.

But this sensation of struggle is not just the result of a programmatic reading of Sorrow and Extinction. Rather, it is built directly into the music of Pallbearer, masters of musical tension. If doom metal’s thematic concerns tend to make annihilation a foregone conclusion, Pallbearer wants, at the very least, to complicate their chosen genre by counterbalancing this sense of doom with a stubbornly persistent forward drive. Every note seems not just intentional and earned but also one successive event in this tug-of-war battle between resignation and determination, producing a white-knuckle tension between two evenly matched forces. Indeed, on the first song “Foreigner,” vocalist Brett Campbell sings, “So between my steps I rest to gather up my strength/ I must keep pushing onward.” Campbell might very well be our heroic protagonist here, whose own strong-willed weathering of the album’s crushing dirges makes a statement more epic and profound than even those hinted at in the lyrics. His voice, unavoidably reminiscent of Ozzy Osbourne but with a more youthful and vulnerable hue to it, is neither low nor high in the mix, instead floating on the surface like a ship bobbing about on the sea amidst a raging storm.

Campbell’s voice is the beam of light shining through the darkness here, beset on all sides. On “Devoid of Redemption,” for instance, the lumbering riffs sound like a succession of boulders falling down a cliffside during an avalanche, a perfect contrast to the overall movement of Sorrow and Extinction, which mimics the strenuous, foothold-to-foothold rhythm of a mountain climber. As it might sound, this is grueling music, majestic in its endurance: the opening riff in “An Offering of Grief” lumbers about in a state of ragged yet tenacious disrepair, sounding charred and rusted into its gnarled shape. Naturally, as heroic as Campbell and his bandmates makes their music sound, inescapable doom nonetheless takes over, and on the album’s final song, Campbell even sings, “Carry me to my grave.” It’s not so much a moment of resignation as it is one of acceptance, and if doom can seem an odd choice of subject matter for a band to sing about, it’s nonetheless true that death is unavoidable, requiring that we confront it with dignity.

That final song, “Given to the Grave,” suggests that there is redemption to be found in this confrontation with certain doom. It’s not just in the angelic choral singing that closes the album. Consider also the final lyric sung on this album: “On the path that leads from here into oblivion/ And no more sorrow can weigh me down.” The sometimes overblown lyrical preoccupations and grandiose imagery associated with metal can occasionally put up a barrier between the music and outsiders. This is unfortunate, because in truth, there’s nothing about being in a band named Pallbearer that is any sillier than, say, Arcade Fire. As lofty as the music on Sorrow and Extinction sounds, Pallbearer’s ability to evoke very realistic, true-to-life emotions is unshakeable. They may abstract these sentiments—what else in a genre ominously called “doom”?—but they hit you with undeniable force, seizing you and pulling you in. The result is a surprisingly heartfelt album, whose sweeping lyrical concerns belie its essentially blue-collar sensibility, workmanlike and starkly unadorned but beautiful in its simple elegance.