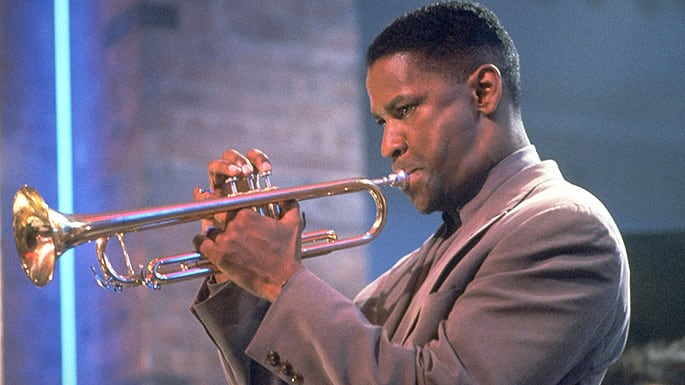 It was never going to be easy for Spike Lee to follow up his 1989 masterpiece Do the Right Thing, a film which generated enormous critical acclaim and cemented Lee’s reputation as a talented director. It’s possible, then, that the slow pacing and low-key affect of his followup Mo’ Better Blues was deliberate, an opportunity to work within a more subtle cinematic framework while also acknowledging the so-called sophomore slump, which admittedly does not technically fit this situation – Mo’ Better Blues was Lee’s fourth feature film – but that did not stop Roger Ebert from leveling that charge against Lee in his contemporaneous review.

Mo’ Better Blues is unmistakably influenced by film noir and classic 1940’s cinema, not surprising as Lee has embraced the style of those films from the beginning of is career. The character of Left Hand Lacey (Giancarlo Esposito) is especially evocative of the classic Hollywood era with his baggy suit, porkpie hat and watch chain, a modern-day zoot suit reflecting a popular trend amongst Latino and black youths in the early and mid-1940’s. The suit also revives the memory of those same youths targeted by whites in racist editorials, culminating in the 1943 Zoot Suit riots, a period of history mostly forgotten through cultural whitewashing, just as the true history of jazz was whitewashed by a Hollywood that rarely included black musicians in films about jazz except as sidekicks to the white stars.

Lee reportedly was offended by cliched views of tortured, self-destructive black musicians as portrayed by white directors in films such as Bird (Eastwood, 1988) and ‘Round Midnight (Tavernier, 1986) and felt he could do better. It’s tempting then to consider Mo’ Better Blues a direct answer to those films; the catch, though, is that trumpeter Bleek Gilliam in Mo’ Better Blues is no tortured genius. Played with subtle intensity by Denzel Washington, Bleek is an excellent musician, focused on his craft and determined to make a living with his horn. But one never gets the sense that he will ever become an innovative force in the world of jazz. Bleek is not a man who would sell his soul at a Mississippi crossroads, and he simply cannot be compared with the real-life genius of Charlie Parker or the fictional Dale Turner, nor John Coltrane, whose image and music are woven throughout Mo’ Better Blues.

Denzel Washington is an actor serious about his craft and thus the perfect choice for Bleek, a young man serious about his music. So serious that his personal life is a series of unsatisfying relationships that lack any genuine connection. Bleek is the leader of a jazz quintet, managed by his incompetent childhood friend Giant (Spike Lee), and the quintet’s time is often spent while Bleek and saxophonist Shadow (Wesley Snipes) butt heads over pay, artistic content and a mutual attraction to Bleek’s girlfriend Clarke (Cynda Williams).

In fact, Bleek has two girlfriends: Clarke, the glamorous singer, and Indigo (Joie Lee), a level-headed schoolteacher. Given Lee’s previous commentary on hair and skin tone, specifically the “Straight and Nappy” number in School Daze, one cannot ignore the meaning behind the difference in the physical appearance of Clarke and Indigo. It is no coincidence that Clarke, the woman trying to pull Gilliam away from his art, is light-skinned with straightened hair. She is often regarded as “the sexy one” in reviews, which I think does a great disservice to Joie Lee as Indigo who is not only beautiful and intelligent but one of the few characters in the film with actual depth. 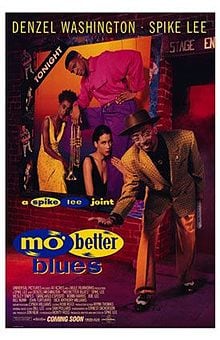 While having two girlfriends who know about each other – Bleek contends that his need for multiple women is “a dick thing” – is a distraction in his life, Clarke is primarily a destructive force. She deliberately interrupts his scheduled practice time to prove to herself that she is more important than his music, and once bites his lip hard enough to cut it, not apologizing but instead laughing as he bleeds. Though an artist herself, Clarke doesn’t seem to understand that art is not only about pursing ones artistic voice but often a day job, a way to make a living.

There is a chilling scene between Clarke and Bleek where she is hounding him for not paying attention to her while he composes. It’s played with some humor and captures the essence of an artist needing solitude to create, but quickly Clarke becomes nothing but a muffled, shrewish harpy, complete with a zoom in on her angry face spitting out words muted into unrecognizable white noise. Clarke is obviously one half of a madonna-whore equation, and there is never a genuine attempt to fully realize Clarke’s character. Rather, she exists to play to a generic, sexist concept that woman’s selfish nature is a threat to artistic man.

Mo’ Better Blues is a cynical film, not just in the portrayal of women but in its refusal to attempt to balance artistic drive with socialization, bluntly stating that this is an either-or proposition. Bleek as a child was not allowed to play with his friends, his mother forcing him to stay inside to practice the trumpet. It’s a cliché old as the Hollywood hills themselves, though we quickly see the real world effects of that lack of socialization experience. The adult Bleek is unable to fire Giant, childhood friend turned manager, though he is terrible at his job and involved in an uncontrolled gambling habit. Hollywood is littered with stories about successful people who kept their pals around only to have it bite them in the ass, but Lee turns that cliché around to make an argument in favor of loyalty at almost any cost, that community and friends are more important than your art or your job.

It’s an interesting take but fails to connect with the rest of the film. Mo’ Better Blues is ultimately a mishmash of ideas that never coherently fit together. Other points raised include Lee’s trademark discussions of racial identity and the body politic, issues seemingly included only because Lee felt they were expected of him. The scene where the quintet berates pianist Left Hand Lacey for having a white girlfriend is one of the best in the film, the camera focused entirely on Esposito as his face reflects the conflict and determination he feels as he is being judged. The moral of this particular story is that there is no moral, however, and when this improvisational scene abruptly ends with Washington stepping into the scene in character, you question just what exactly the lesson was or why this conflict was included.

What is unquestionable, however, is Lee’s influence on cinema in the 1990s and beyond. His use of deep, solid colors and bright-toned violence influenced the entire decade, as did his now-trademark fantastic sequences of deep focus and dynamic camerawork that spins and swoops and glides. These sequences are unfortunately used in Mo’ Better Blues to compensate for moments that falter through a lack of momentum, turning the extreme cinematographic styles into garish distractions.

Also influential were the quirky characters in slightly surreal situations, but in the case of Mo’ Better Blues they were also undeniably controversial. There are two pairs of such characters in the film, the hitmen Madlock and Rod (Samuel L. Jackson and Leonard L. Thomas, respectively) who engage in comedic banter and sport their own broken bones while threatening to break others, and the Flatbush brothers, Jewish club owners played by Nicholas and John Turturro. The Coen Brothers and Quentin Tarantino would use the same characterizations, often with the same actors, in their own films a few years down the line. It’s clear that Lee intended these characters to be comic relief, yet the portrayal of the Flatbush brothers as stereotypical greedy Jews understandably drew ire from reviewers as well as the Anti Defamation League. Lee did not help his case any when he stated in an interview that the proof that he was not anti-Semitic was that the Jews who run Hollywood would never allow such stereotypes in his films.

External political issues and obvious cynicism bog down what in all likelihood was to be a rather lighthearted affair. Ideas are introduced and immediately dropped, plot points are left unattended and the resolution, apparently, is that it’s better to merely survive life with no goal rather than correct your parents’ mistakes with your own children. Despite a score performed by the Branford Marsalis quartet and Terence Blanchard, the reality of the life of a musician is never explored, traded instead for luxurious apartments and smoky, camera-ready clubs filled with beautiful, appreciative patrons. Mo’ Better Blues is rightfully considered one of Lee’s lesser efforts, full of his trademark style but ultimately disconnected from much of the rest of his work.