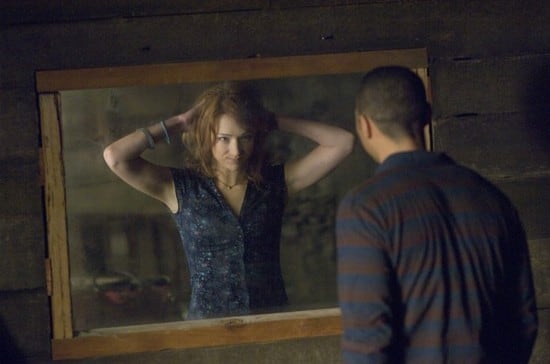 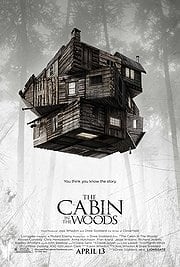 It is impossible to discuss The Cabin in the Woods, the latest meta-horror film, without including spoilers. If you plan to see the movie, know this: it is quite clever, quite gory, very funny and not really that frightening. Now stop reading this review, close your eyes if the trailer pops up somewhere and avoid reading any other reviews where the critic is feeling less charitable about disclosing plot twists than I am. It is best to go into the film as I did: with no idea what the hell it is about. Of course, bookmark this page and come back to it after you see The Cabin in the Woods.

Still there? Did you come back? Did you notice how this was clearly a Joss Whedon production? Yeah, some other dude had his name in the director’s slot (Cloverfield writer Drew Goddard) but Whedon (of “Firefly” and “Buffy” fame) co-wrote and produced The Cabin in the Woods. And if you know anything about Whedon, you know that he cuts his sci-fi and horror with big sugary doses of comedy. And that he is probably insane.

Like Scream did back in 1996 (Christ, has it been that long?!), The Cabin in the Woods attempts to turn the horror genre on its head by adding a subtextual layer to what is familiar. Basically: use the well-worn horror tropes that we know so well and use them against us (and the nubile cast) to create a film that is self-referential yet still knows when to pull back and give us the goods. The title itself evokes the mist-shrouded environs of Crystal Lake or the cabin from The Evil Dead, right? But the group of teens about to be dispatched this time around is facing a threat far worse and with many more ramifications than a resurrected mass murderer or a book of demons.

Whedon and Goddard wisely begin the movie not with the aforementioned teens, but a shadowy, underground government headed by Bradley Whitford and Richard Jenkins. In the bowels of this compound slumbers some unnamed “ancient god” that must be placated with the blood of unsuspecting teens every so often or else it will return and smite the earth and destroy civilization.

Enter a group of five teens who just happen to be heading to that cabin in the title. Each embodies a different horror movie cliché: “the virgin” (Kristen Connolly), “the jock” (Chris Hemsworth), “the whore” (Anna Hutchinson), “the scholar” (Jesse Williams) and the fifth wheel pothead “fool” (Fran Kranz). Whedon and Goddard do a good job fleshing out each character a little beyond the formula. Too bad the decks are totally stacked against them.

The Cabin in the Woods really only works if you’re willing to let Whedon and Goddard take you on a ride. Lots of it is not going to make sense, all of it is completely implausible, but let yourself go and you’re in for a thrilling treat that will induce numerous, genuine laughs. By the time the film makes its way to its apocalyptic finale, the suspense trappings have been completely left behind, leaving us with perhaps the goriest comedy ever filmed.

So what keeps The Cabin in the Woods from replacing Scream as the most indelible of modern horror films? First of all, Wes Craven still included some unsettling moments in Scream and his plot was completely plausible. Also, depending on your point of view, the ending of The Cabin of the Woods will be either amazing or completely over-the-top. But perhaps Whedon includes one too many “wow” moments, like a fireworks finale that goes on a wee bit too long. By the time a big name star shows up to explain everything Scooby-Doo style, we’re no longer in a horror film, but a phantasmal funhouse of gore. I can think of worse ways to spend $10.