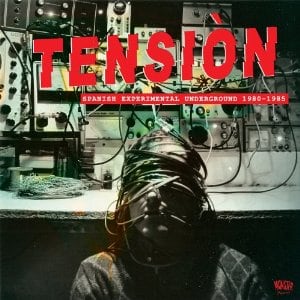 [xrr rating=3.75/5]Punk may have been formed in stylish New York heroin dens and London fetish-as-fashion shops but it always meant the most in the isolated, unknown places where kids could wield it as a shield against real forces of tyranny. That’s why the story of punk is best framed in the context of something like Tensión: Spanish Experimental Underground 1980-1985, a compilation collecting the often weird and ungainly salvos from Spanish youth who had been held back for generations by an oppressive regime and suddenly found an entire genre seemingly built for their righteous frustrations and fears.

Tensión doesn’t quite reach the heights of similarly constructed and minded compilations like Soul Jazz’s essential Brazilian post-punk collection The Sexual Life of the Savages but it is in many ways a far more eclectic, varied release. Across 18 tracks, Tensión shows a Spanish underground populated by No Wave art-terrorists, acolytes of Berlin-era Bowie, hardcore pioneers and some figures who were exploring completely unique territory that sounds singular even today. These latter offerings are the highlights of Tensión, particularly in the case of something like Mar Otra Vez’s “He,” a bracingly original song with a guitar line that predicts the Soft Moon’s entire aesthetic, surgically attached to a rhythm that could give the best of A Certain Ratio a run for its money and a deliciously unhinged vocal performance. Il Época Del Hombre are revealed as similarly futurist on “Me Bato Contra Dios,” a missing link between the freshly revived Minimal Wave scene and the studio prankery of Was (Not Was)’s late ’70s output, complete with samples and crazed drum machines.

Several of the tracks also integrate lesser-utilized world music forms, like Claustrofobia’s enchanting “París Nostálgic (Tango)”. Mixing Middle Eastern tones and instrumentation with Spanish rhythms, “París Nostálgic (Tango)” is the kind of bizarre curio that can singlehandedly make a collection like Tensión a necessary purchase to certain listeners. Los Iniciados’ “La Marca De Anubis” is more straightforward in its structure but is nearly as pioneering in spirit, utilizing an exotic keyboard hook and noise music breakdowns as juxtapositions to the over the top, melodramatic vocal. Clónicos’ “Cha Cha Cha” even seems to reference the Residents, with its insane horns and constant structural changes, but with possibly hip-hop derived electronic elements that sound as though they’re imitating scratching.

What keeps Tensión from being a perfect collection are the more nominally “punk” offerings, like La Fundación’s generic hardcore track “Repetición” or Klamm’s New Romantic take on the Pop Group on “The Past is Frozen.” Towards the end of the compilation, a group of poorly recorded attempts at No Wave and some anonymous industrial tunes are thrown together, almost as though the curators of the anthology recognized that these tracks were of greater historical value than artistic and thus needed to be quarantined. It makes for an odd conclusion to an otherwise illuminating mix and robs some of the preceding tracks of their energy.

But that slight derail ultimately doesn’t make too large of an impact on the value of Tensión, which still manages to be a thoughtfully designed and packaged examination of a scene that otherwise may have been entirely overlooked in the already crowded world of punk archives. What Tensión has on so many of its peers is true purpose and uniqueness, enabling it to be a rare anthology that sheds light on music that is entirely unlike anything else from its timeframe or now.