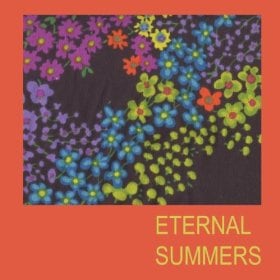 On The Dawn of Eternal Summers, a reissue their of early EPs, 7 inches and covers, their lack of studio trickery could be a blessing or a curse, depending on how they would’ve went through with it. Obviously part of the appeal here is the simplistic, no-bullshit approach, one that may have been planted within the Magic Twig Community, the Roanake-based “art and indie pop organization/collective” where the band got together. This approach proves to be a strong asset on “Able To,” which best captures Yun’s out-of-left-field range and the band’s “make lemonade” approach. Yun repeats, “Are you able to?” a handful of times, slightly modifying the phrasing each time (a variation of a trick I personally found much more clever on Bill Callahan’s “Too Many Birds”), making the whole thing sound like a stoned, less jumpy The Pains of Being Pure at Heart

But sometimes, like in “Loaded One,” Yun’s lofty vocals soar over muddy power chords for just a few too many seconds, leading the listener to wonder what some horns or plinking piano would’ve sounded like thrown in the mix. Her voice can also be grating when reduced to mildly winking “ooh ohh ahh ahhs,” as in the spy-guitar romp “In The Beginning.” They’re smart enough, though, to keep the overall song lengths short (with only one tune crossing the three-minute mark).

Eternal Summers, by name alone, will naturally draw comparisons to the Best Coasts or Beach Fossils, but the blueprint was drafted years prior with the dirty guitar-and-drums stomp of Wire’s Pink Flag and Guided By Voices, the sunnier side of Sonic Youth’s alien tunings and the almost childlike melancholy of Yo La Tengo’s Fakebook. The swift “Heart Square” comes off as an ode to Dan Bejar’s more frantic work with The New Pornographers, though the song veers far off track with a jarring chord shift halfway through.

While Eternal Summers never shoves any particular influence in our mugs for too long, a unified, original voice is absent from The Dawn of Eternal Summers, as it remained absent on their proper debut, 2010’s Silver. With their sophomore album on deck for 2012, the band at this point lacks a groundbreaking new sound or even general direction that may have been implied by the title The Dawn of Eternal Summers, but it’s a difficult sound to insult and there’s certainly no good reason to ignore it.