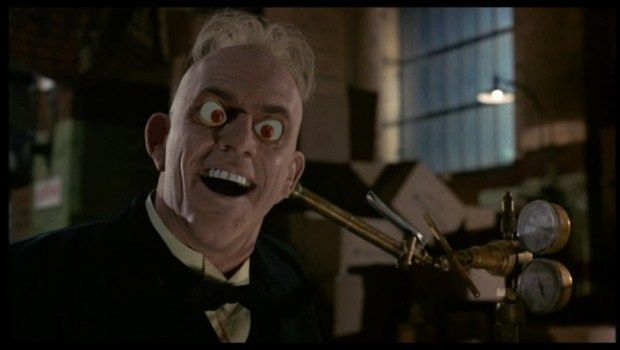 Time has a way of warping the pop culture of bygone eras into more cartoonish forms. As special effects wizardry advances, decades-old movies reliant on visual illusion can generally go one of three ways: laughably fake, endearingly outmoded or timeless. During the ‘80s, I missed a number of notable special effects-driven summer blockbusters simply because I was still an ankle-biter. In our household, curse words or adult situations (no matter how benign) were avoided like classmates with head lice, so the desire to see the 1988 blockbuster Who Framed Roger Rabbit? never entered my formative mind. Roger was rabbit non grata and that was good enough for me.

Upon viewing this Robert Zemeckis film now, I realized that I did have at least one firsthand experience with Roger Rabbit previously. The film opens with a fully animated scene of Roger as a babysitter (for some reason), a segment very similar to the short that preceded screenings of Honey, I Shrunk the Kids a year later. After that brief trip down memory lane, I finally entered into the foreign landscape in which “Toons” stroll about the real world. I’ll be honest, I thought it was going to be gimmicky (much like the copycat Space Jam in the mid-‘90s). I was wrong.

The plot itself is succinctly summed up in the film’s title but bears a little elaboration here. Roger was framed for the murder of gag-prop mogul Marvin Acme (Stubby Kaye). It begins when soggy gumshoe Eddie Valiant (Bob Hoskins) snaps some scandalous photos of Roger’s unreasonably attractive wife Jessica (voiced by Kathleen Turner) literally playing patty-cake with Acme shortly before the rich trickster’s head winds up under the business end of a comically oversized safe. As the prime suspect, Roger turns to the cantankerous Eddie (whose reliance on booze has diminished him to much more of an “Eddie” than a “Mr. Valiant”) to help clear his name. 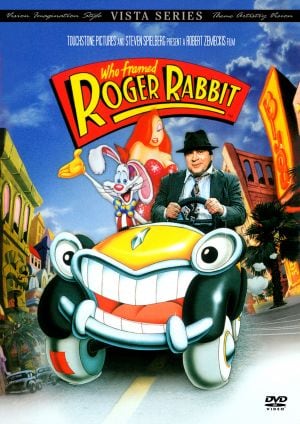 The decision to meld this alternative Toon-populated universe with the ‘40s crime noir genre was a stroke of genius. Silhouettes cast behind frosted office windows and set to mournful trumpet solos blend seamlessly with the actual shadows of the Toons and their corresponding wacky sound effects. The result is a cohesive whole; a complete parallel universe. By shining a light on the detective genre’s most overused tropes, Roger Rabbit manages to pull off both homage and parody while allowing for deliciously hammy wordplay common in both noir and animation. In fact, this may be one of the most self-aware films I’ve ever seen. There’s technology jokes (Betty Boop is stuck waiting tables because work’s been slow since cartoons went to color), hindsight gags (Eddie declares that there’s no need for a car in L.A.), double entendre galore (“Nice booby trap”) and plenty of juicy esoteric cartoon and film references (an anachronistic reference to Harvey notwithstanding). The pace never misses a beat as all the heavy-hitting Disney and Looney Tunes characters pop in and out of frames and sling snappy jokes like pies to the face.

Despite the enjoyment derived from watching much-loved characters Donald and Daffy dueling it out onstage at the humans-only nightclub or Mickey and Bugs skydiving together in Toontown, the film’s original Toons are the most compelling. Roger may be Bugs Bunny on blow, but he’s funny, his manic energy and pinched voice a precursor to the appeal of SpongeBob Squarepants. Jessica’s famous lounge-singing scene is entrancing, her impossible shape making an hourglass look amorphous. And, oh, Christopher Lloyd. Your career may have taken a dive some years later after Dennis the Menace force-fed your thieving hobo character a potful of baked beans, but damn if I don’t love your work from 1985-1990. Lloyd’s super-villainous Judge Doom is some kind of bizarro Doc Brown. He creates a Toon-melting acid called “Dip,” and in one scene he straight up murders a Toon shoe simply because he can.

Roger Rabbit succeeds by striking the proper balance, and in subtler ways than matching painstakingly hand-drawn animation with previously shot live-action scenes. The film touches on social themes without ever delving into direct commentary. The Toons “work for peanuts” and are segregated into Toontown, a kind of animation apartheid. Judge Doom’s vaporizing “Dip” has nuclear overtones in a film set at the beginning of the Cold War era and, as chance would have it, filmed near the very end of it. Doom also represents corporate greed with his desire to level Toontown to make way for a billboard-lined freeway. And when Eddie shoots a Toon bullet personifying Native American stereotypes at a discarded whiskey bottle, I like to believe it’s in a subversive jab at Disney’s troublesome history with racism.

But by deftly juggling all these elements, Zemeckis crafted a landmark film that’s simply a joy. There’s a unique satisfaction in laughing out loud at jokes first cracked almost 25-years ago. I’m pleased that I never saw this film at a young age, simply because it’s too rich with subtle humor hidden beneath all the zany action; too much of this movie would have been lost on young me. By lampooning various genres and turning clichés on their heads, this landmark in special effects achieves timelessness.