January 27, 2021
Home Film Hit So Hard: The Life and Near Death Story of Patty Schemel 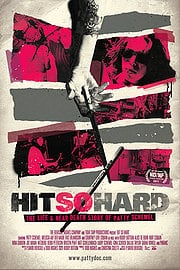 [xrr rating=2.75/5]Rock documentaries are a strange breed. Tracking the ups and downs of a band or an individual musician almost invariably winds up becoming so insular that it’s hard to fathom how the resulting film could have an impact on anyone other than the true believer who basks before it as a visually stimulating stand-in for their own fannish memories. I love Tim Irwin’s 2005 documentary We Jam Econo: The Story of the Minutemen, for example, but I recognize that my affection is stirred up in the exact same way that the opening notes of “History Lesson – Part II” provoke a helpless smile. It’s my well-developed appreciation for the subject as much as (or more) than anything that Ebersole and his collaborators unearth and stitch together that makes the film work. I know why the uncaged tween screams at the Bieber movie.

Beyond reaching out to a potential lingering fandom for the grunge icons of the early 1990s, it’s hard to discern why anyone felt compelled to make a documentary about Patty Schemel, best known, to the degree she’s known at all, as the drummer for the band Hole during their commercial and creative peak. The musician from Marysville, Washington was reportedly Kurt Cobain’s original choice to drum for Nirvana before Dave Grohl entered the picture, and she wound up staying somewhat in the family settling in behind his wife when original Hole drummer Caroline Rue left the band. They put her in the group just in time to be part of Live Through This, the sensational 1994 album that was released mere days after Cobain’s death.

As the film surveys this tumultuous era for the band when tragedy and success were engaged in a strange duet (Hole’s bassist Kristen Pfaff died of a drug overdose just over two months later, compounding the strange sensation), the story of Schemel often gets lost. Surely it’s irresistible for director P. David Ebersole to employ as much rare home movie footage of Cobain as he can get his editing software on, but the friendship between the drummer and the iconic generation’s voice doesn’t offer enough justification for the film’s focus to wander that much. Major stretches of the documentary come across as weirdly formless, as if Ebersole is having trouble finding his story arc, which is especially strange since Schemel’s cautionary tale is the sort that launched a thousand episodes of “Behind the Music.”

Schemel talks openly about getting into alcohol and drugs at an early age, beginning with taking up drinking when she was 12, a habit she regularly indulged in with her brother. The rock ‘n’ roll lifestyle has taken its toll on people far less susceptible to addiction, and Schemel’s constant yo-yoing to new lows isn’t especially surprising. Ebersole doesn’t find ways to infuse the story with new insight, in part because Schemel seems just a bit guarded in her discussions of it. The most harrowing it gets is when some old footage is made shaky, blurry and distorted in an apparent attempt to visually depict the ravages of addiction. Schemel talks about her time among the homeless with a bland frankness. It’s a little disarming, sure, but it also doesn’t convey the anguish of the situation with any urgency.

Despite these shortcomings, I liked a lot of Hit So Hard. Why? Well, I guess I’m a true believer. I fully remember the immediacy of Hole’s Live Through This, released at a time when the legion of imitators of the signature Seattle sound were starting to smother themselves in grinding monotony. The movie captures just enough of that exciting, unexpected feeling that came with seeing raw, piercing, feminist, angry music connect with a wide audience. The different band members sit and talk about the time with a displaced awe, almost as if they’re describing a half-remembered novel. These sequences are naturally led by the rolling disaster that is Courtney Love, still the girl with the most cake and now prone to occasionally talking right at the camera with her mouth jammed full of it.

Indeed, the more Hit So Hard is about the music – about what it meant when Schemel hit those drums so hard – the better and more compelling it is. A brief survey of other significant female drummers in the history of rock ‘n’ roll has more impact than much of the considered introspection that precedes it. Schemel had a rough journey and her personal turnaround is worth relaying. Still, the filmmakers would have served Schemel better if they’d spent a little less time digging in her past and a little more time just letting her play.