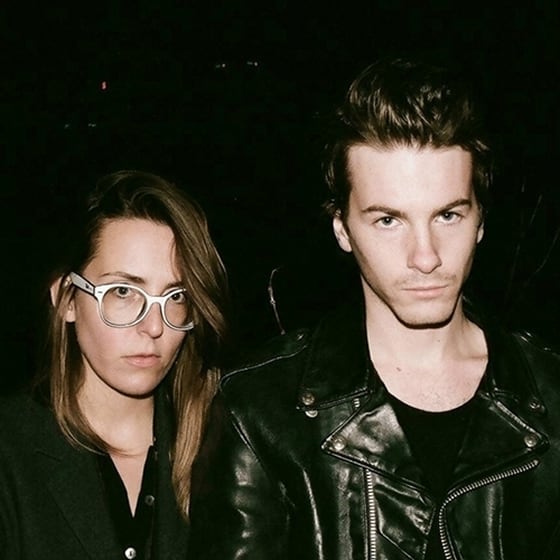 Last March, Stereogum ran an article called 18 Dark Bands to Watch in 2011. Their list detailed acts from the unfrozen punk of Iceage to the haunted folk of Chelsea Wolfe to the horror hip-hop of White Ring. The website also mentioned Trust, explaining that the Toronto duo formed in 2009 to make music that focused on “nostalgia, lust and erotomania.” This description prompted me to buy the Sacred Bones-issued 7″ of “Candy Walls” at Academy Records in New York. A year later, Maya Postepski and Robert Alfons took their nightmarish club music on the road. Last week they stopped in San Francisco at DJ Nako, Omar and Aaron Axelsen’s party Pop Scene, thrown Thursday nights at the Rickshaw Stop. Nako, who also spins at SF’s witch house gathering 120 Minutes, and runs the goth devotional night at Shutter, has had a significant hand in bringing dark bands to the Bay this year with visits from Gatekeeper, HTRK, Shlohmo and Cold Cave. Nako and Aaron Axelsen tag-teamed DJ duties spinning some writhing dark jams such as the Adeptus remix for Miracle’s “Visitor” and i amamiwhoami’s “Good Worker” on a Noah’s Ark of a rainy night to an eager elbow-to-elbow crowd.

Lights all the way down on “The Sing” by Kool Thing whet the anxious club kids for a lead up to Trust’s set, which got on more like a punk show than a rave. Packed sweaty teenagers, twentysomethings and people well over their thirties heaved forward once Alfons bounced on to the stage with his avoidant eyes and affectedly (but not actually) drugged out, nervous movement. People stood on their toes to peer over at Postepski who took the chair behind the drum kit. Stoic and mysterious she took on the impenetrable yet goofy mien of Fake Dead Laura Palmer. Alfons similarly, and I think without noticeable intention, took on a striking resemblance of River Phoenix’s Mike Waters from My Own Private Idaho with his teen-wolverine haircut and hard eyes. Positioning the mic above his mouth, the spooky intro of TRST “Shoom” rung out. Everyone was born ready.

The Trust set was front loaded with their most danceable songs like “F.T.F.,” “Bulborm” and “Heaven” coming on early. There was no “Candy Walls,” the group’s icy single, which was cool. I like when bands have the kind of tact not to play the song that everybody who is at the show likely knows already. Both performers Postepski and Alfons were equally engaging in their own idiosyncratic ways. It was thrilling to see Alfons sing because not only did I think that the scrawny Canadian was a busty black dude because his timbre is so rich and powerful, I also thought that Postepski was singing the high range, head-voice parts from “Shoom” and “The Last Dregs.” Watching him effect his eerie range from the cracked tenor into the dramatic soprano was like watching him become a different person entirely and then back again. Postepski did sing however, while playing live drums simultaneously with ease and conviction for the dissociative disco jam “F.T.F.” Postepski who played synthesizer for Fucked Up on “Solomon’s Song” and also sung for Egyptrixx on “Chrysalis Records,” played drums, at times going as far as to half smile or nod in satisfaction, accenting the throb of their processed drum sequences. Postepski has a flare for compact, clever floor-tom to tom-tom drum fills that crease the bigger songs like on “Bulbform” with deft syncopation.

Though I couldn’t detect where their playback machine was I decided that the energy was so good that I didn’t care. Even though there’s no way a drum kit, vocals and a single Nord keyboard could reproduce Trust’s dense dark dance recordings on TRST, they were so into what they were doing that their lack of representation of album sounds didn’t matter. After the show I went to the merchbooth to buy their Sacred Bones 12″ of “Bulbform.” I told Alfons how surprised I was to see him sing all the high vocal parts that I thought Maya was singing on the recordings.

“Yeah, a lot of people are confused about that.”

“I wasn’t confused, I was certain,” I said. Certainly wrong. Both Postepski and Alfons share singing creativity but it is rad to see them do it live. It is thrilling to watch Alfons imitate Postepski’s range live, namely on “Chrissy E” who’s track takes its name from the photo of Chrissy on the cover of TRST that Alfons took outside of a nightclub in Toronto. “I shot her on film you know so I didn’t know how it would turn out or anything. We ended up using it.”

He grinned. “Fag ’til forever.”