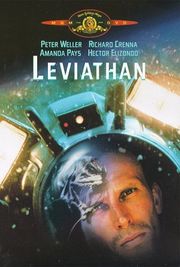 The 1980s saw a lot of Alien rip-offs, including several in the briefly popular “underwater Alien” sub-genre. Leviathan is arguably one of the best known while also being the least respected, a reputation it undeniably deserves. The film has a lot going for it, namely Peter Weller’s turn as a mostly clueless, milquetoast geologist who has no business leading a crew through a dangerous operation. There is a terrific supporting cast, exciting action and even surprisingly good sets. It is not a stellar film but solidly entertaining; ironically, it’s the tacked-on ending which blatantly attempts to add more entertainment value that ruins the entire flick. Immediately after what was obviously intended to be the climactic finale, another ending appears, its only purpose to make sure the black guy doesn’t survive the horror film. This means resurrecting or inventing another evil creature out of thin air. It’s frankly inexplicable, as is the arrival of the corporate villain who had just been shown in an office many hours away. Then we are treated to a sad rip-off of both Die Hard and Jaws, and the happy beautiful survivors stroll off smiling, which is exactly what one would do after watching their friends and co-workers being eaten by a hungry monster from the deep moments earlier. Rarely does a studio make their low opinion of the audience so obvious. – Stacia Kissick Jones

Oh, Robin Williams. You were so close. You almost had an entire movie in which you were riveting and grotesque, one which was miles away from the tired, manic schtick you’ve been peddling since before I was born. In One Hour Photo, you played Seymour Parrish (and was it coincidence that your character had the same surname as in Jumanji? Yes, probably), a photo clerk disaffected with humanity with the exception of one family who he becomes obsessed with through their family photos. And it was fascinating! You were low key, fascinating and quietly creepy. And then, when it was in the bag, you had a turnaround in the last few minutes of the film, explaining in loud, angry detail exactly what made Seymour the way he was. Were you punishing us, Robin Williams? Did you ruin a film at the last minute, just for an audience somehow expecting subtlety? – Nathan Kamal 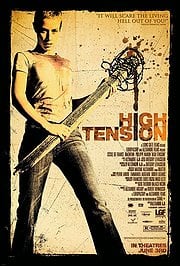 Slasher films don’t require a great amount of plausibility to be really, really enjoyable, but they better be campy instead. High Tension makes the mistake of going for suspense and big scares instead of not taking itself too seriously — a problem only because the plot doesn’t make any sense whatsoever. It all starts off well enough, the biggest scare dropping right in the beginning with a cringe-inducing first shot of our killer that builds some serious fearful anticipation. Unfortunately the final act’s attempts at a great twist are the kind of chum forums tear to shreds within minutes after the first unlucky viewers leave the theater. – Michael Merline

When Tom Hanks took to the stage to claim his Golden Globe for playing Chuck Noland in Cast Away, he recounted a conversation with Robert Zemeckis in which the director talked about having “the balls” to approach the material in a unique, unexpected way. While Hanks’ impression was surprisingly unflattering (he used a voice that made Zemeckis sound like the token nerd in a Nickelodeon cartoon show about playground adventurers), the story of the film’s genesis was a useful reminder that Cast Away, already a sizable hit when Hanks won the award, is a notably nervy film for most of its running time. In depicting the travails of a man stuck on a deserted island, Zemeckis and his collaborators opted to emphasize the lonely isolation, especially the unbearable silence that comes from being stripped away from anyone who can engage in a two-sided conversation. The film is firmly minimalist and largely rejects any dramatic shortcuts. Until its final passage, that is. Returned to society, the film moves Chuck through scenes of painful, patent phoniness until he is literally dropped at a crossroads, pondering his possible futures. It’s hackneyed, cheap and incredibly lame. – Dan Seeger 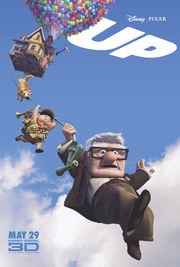 Rapturous cinematic perfection for its introductory fifth and forgettably pat for the remainder, Up could have been the best Pixar short ever created, but somewhere along the way someone had the unwise idea to expand upon the sublime kernel it begins as. (If you don’t know what I’m talking about, you are one of the few who has not watched this film — so go see it!) Co-director Bob Peterson’s turns (particularly the one as Dug the dog) hit the spot and it mostly retains the studio’s typical charm, but clever gags aside the rest of the movie drags once it moves its setting to South America, even for its brief 90-plus minute running time. It’s an earth-shattering proposition — a world where Pixar missteps may rightly be considered a world that doesn’t deserve to exist — as well as an editorial cliché, but it doesn’t make it any less true: first 20 minute aside, Up was an undeniable disappointment. – Joe Clinkenbeard