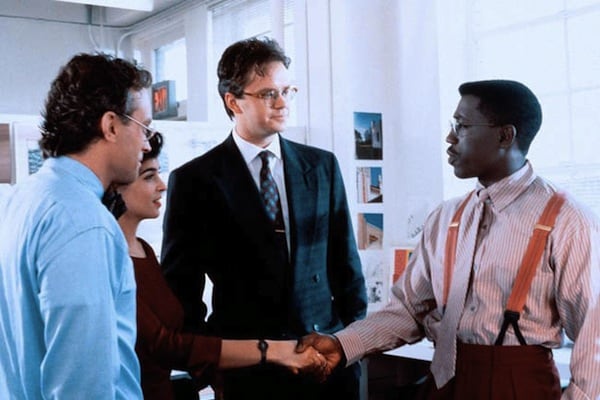 The United States has been shaped by its history of racial, ethnic and cultural difference more than any other factor, and it is Spike Lee’s commitment to using cinema to investigate these differences and the friction they generate that makes him an important American filmmaker, not just an “African-American” one. This is apparent even in his first feature-length film She’s Gotta Have It, which revolves around four dissimilar black characters who embody different, occasionally conflicting faces of African-American identity in New York. Although She’s Gotta Have It and School Daze, Lee’s second feature film, depict exclusively black communities, the latter taking place at an all-black college, Lee’s filmmaking also speaks to white viewers who might feel they have no way to relate to these films by boldly, unapologetically foregrounding aspects of black identity and reminding us that all identities are interconnected, never forming in isolation. Indeed, a key musical sequence in School Daze deals with the issue of skin color, dramatizing our shared obsession with lightness. Lee ends that film with a character pleading directly into the camera, “Wake up”: we are all implicated, and even white American viewers must acknowledge how intertwined they are with the oppressive forces that have shaped and assailed African-American identities.

With Jungle Fever, this long-repressed interconnectedness comes to the forefront, driven home by the film’s bold promotional poster showing the intertwined fingers of a black and white hand. The poster blends difference into a tightly connected, inextricable unity, replacing the clean, linear boundaries desired by those who, harboring prejudicial attitudes, would prefer separatism. Our ability to relate freely and unguardedly with one another, Lee laments, is choked by these attitudes, which are found throughout Jungle Fever’s New York. There, racial, ethnic and cultural identities are defined as much by a group’s difference from other groups as they are by the qualities shared internally by a group’s members. America as a whole has not yet learned how to think about difference, and this severely cripples us, socially, emotionally and spiritually. It’s not an accident that the most disturbing act of physical violence in Jungle Fever is an Italian-American father beating his daughter for dating a black man, a harsh lesson in maintaining the fixity of boundaries. In Jungle Fever, prejudice gnaws at all of us, even when we are alone in the comfort of our perceived communities. All of this makes Jungle Fever a tragedy of epic proportions, albeit one that is scaled to the intimate dimensions of the couple, indicting not any one group but all Americans.

Lee’s early work concerns itself with the question of how to film not just individuals but the less visible communities to which they belong. This was achieved most successfully in Do the Right Thing, one of the singular masterpieces of its time, but started in She’s Gotta Have It, where characters embody social types, from the street smart, smooth-talking Mars Blackmon to the elite-minded, snobbish Greer Childs. School Daze builds on this, shifting from the individual to actual communities. Befitting the factionalism of its college campus setting, School Daze regards these communities tribally, but it stops short of the mythopoetic treatment of communities in Do the Right Thing, where larger-than-life characters resemble figures in a Greek drama. In that film, there is no conflict between the individual’s identity and the community: every character is simultaneously an individual, sharply drawn and given unique names like Buggin’ Out, and a representative of his community, hence the nickname of Ossie Davis’ character, Da Mayor. Lee would build on this weighty sense of individuals embodying mythic, communal figures in Mo’ Better Blues—where the jazz musician functions as a mythic culture hero—and even more successfully in Jungle Fever, where the tension between one’s individual and group identities is stretched to a breaking point. 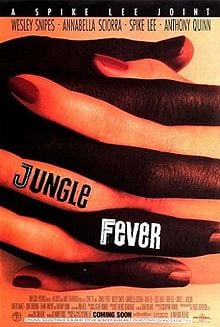 In Do the Right Thing or Mo’ Better Blues, this weightiness tended to amplify the film’s scale and create a sense of grandeur around the characters, but in Jungle Fever, it generates weariness, sorrowfully acknowledging that we cannot easily escape socially inscribed identities. This inability to transcend the pull of communal expectations and prejudices tragically dooms the brief but passionate love affair between Flipper Purify (Wesley Snipes), a married and successful black man, and Angie Tucci (Annabella Sciorra), a young Italian-American woman who is hired as his temporary secretary. Lee depicts them falling in love during a series of after-hours encounters, staying late to work on a project together. Flipper is initially resistant to Angie but the two naturally begin to open up to one another in this intimate, isolated setting. Lee cuts seamlessly from one night to another, stringing scenes together but casually hiding everything else that happens between them so as to create the illusion that these two individuals are, at this moment, living from one encounter with each other to the next. This reverie-like atmosphere allows romance to bloom quite spontaneously, but this romance withers when exposed to the merciless gaze of communal expectations and prejudices, which smothers and makes bitter the sweetness of their initial encounters. It seems that according to Lee, the dream of Martin Luther King, Jr. to see others as people first, not merely as representatives of their race, is tragically not yet possible.

Where Lee’s earlier films were emboldened by presenting themselves as intrinsically black acts of expression, Jungle Fever is the work of Lee, the American, whose despair for his country’s tragic failure to overcome intolerance pains him as a human being above all else. This is not to say that Lee is disinterested in racism. The nightmarish scene in which Flipper goes to a sprawling crack house to find his junkie brother (played by Samuel L. Jackson), overlaid with the anguished cry of Stevie Wonder’s “Living for the City,” is a haunting vision of how economic impoverishment, nihilistic self-hatred and exploitation gnaw away at urban black communities. But Jungle Fever exposes a deeper and more universal prejudice: we use differences as a way to define our own identities but hypocritically turn away from others primarily because of these differences. This insight is treated with a bravura stylistic flourish in a sequence from Do the Right Thing, where a succession of men of different identities (black, Italian, Puerto Rican, white, Korean) hurl racial epithets at the camera, each taking turns slurring their perceived racial and ethnic foes. These men feel safe in their own identities because they know who they are not, but it’s impossible to overlook the fact that each needs the hated other to buttress his own identity. In one scene, a black immigrant from the Caribbean stresses that despite his skin color, he is not “black.” Even minor differences swell up to become defining traits.

Jungle Fever’s beginning and ending mirror each other as a way to suggest the boundaries between communities fracturing before becoming patched back up, but the false resolution this provides is the perfect encapsulation of its tragic tone. Jungle Fever begins with Flipper and his wife Drew (Lonette McKee) happily making love, and Lee duplicates the look of this opening scene for his ending. This time, the couple is making love again but not so happily. Wounds have been opened up and have barely healed over, and either way, scars will likely remain for a long time. But more importantly, we are not even sure if we want Flipper and his wife to get back together after his affair with Angie. The effect is similar to the ending of Nicholas Ray’s Bigger Than Life, in which a father grows progressively more monstrous as a result of medication. The film finally ends with the restoration of the family after doctors have “cured” him, but Ray certainly meant for this resolution to be ironic, a mockery of classical narrative structure: we have already seen too much horror for everything to go back to normal. Love is severely tested in Jungle Fever, exposed as being only conditional: not only is Flipper’s wife most upset that the woman he cheated on her with was white, but Flipper also realizes that Drew might be all he has, given that society won’t seem to let him and Angie be together in peace. Lee ends his film with Flipper’s impassioned, howling “No!” in response to a black prostitute who solicits him in front of his daughter. It is a chilling moment where Flipper looks into the face of his own community and sees something foreign and horrific. For the first time, Lee depicts community life as somehow suffocating, recognizing that the boundaries which create communities are also simultaneously the ones locking us into socially inscribed, occasionally degrading roles. And if in this process even love is trampled, then it may be time to rethink everything.