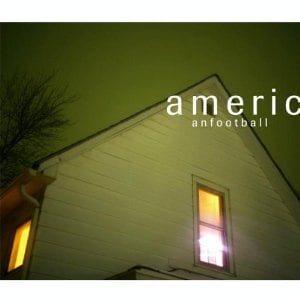 It’s not every day that you hear the labels “math rock” and “emo” tossed around when discussing the same band. In fact, the audience for these genres—if that’s what they truly are—might seem diametrically opposed. “Emo” conjures up images of young men playing guitars aggressively whilst singing confessional, heart-on-sleeve lyrics. In contrast, “math rock” typically connotes music concerned more with the head than the heart. Virtuosic musicians demonstrate their technical prowess on top of continually shifting, asymmetrical polyrhythms. The lyrics, if they even exist, play second fiddle to the complex music.

American Football, a trio from Urbana, IL, managed to bring these two divergent aesthetics together. The group, consisting of Mike Kinsella (vocals/bass/guitar), Steve Holmes (guitar) and Steve Lamos (drums, trumpet), was only around for about three years. Frontman Kinsella had previously worked with Chicago band Cap’n Jazz and would go on to launch a solo career under the name Owen. American Football was the kind of band that could easily become a mere footnote in history. Their music never reached a particularly wide audience nor received a whole lot of critical attention. They released just one LP and one EP and toured almost exclusively in the Midwest. Nevertheless, their eponymous debut record still holds up after more than ten years as a piece of mellow, subtle pop-rock. It’s definitely worth revisiting.

I was a sophomore in high school in 1999 and unaware at the time of American Football’s existence. It’s too bad, since the band would have made a perfect soundtrack for my faintly angsty existence. I wasn’t the kind of teenager prone to outbursts of rage or outward expressions of strong emotions, at least not very often. Similarly, American Football, despite the emo label sometimes attached to it, is not about shouting its feelings as loudly as possible. Sure, the lyrics are often pretty naked in their emotional audacity. Take lines like, “Let’s just pretend/ Everything and anything/ Between you and me/ Was never meant” or “Don’t leave home again/ If empathy takes energy/ ‘Cause everyone feels just like you.” Somehow, I have a hard time believing songwriter Kinsella when he says, “Honestly, I can’t remember all my teenage feelings.” Even the song titles (“The Summer Ends,” “Honestly?,” “You Know I Should Be Leaving Soon,” “I’ll See You When We’re Both Not So Emotional,” “But the Regrets Are Killing Me,” etc.) suggest the kind of inner turmoil often associated with adolescence.

It’s remarkable, then, that Kinsella and company manage to keep these songs from turning into bad high school poetry. The key to their success is in the music that accompanies the plainspoken lyrics. The odd time signatures, repetitive lead lines and complex song structures—the characteristics that gives the band its “math rock” designation—create a fascinating counterpoint to the record’s simplistic lyrical content. American Football comes off more as an existential journey through the mind and soul of a conflicted young man than as a collection of cheesy lines written on the back of a high school sophomore’s notebook.

“Honestly?” and “Stay Home” are the most fully realized tracks on the record. “Honestly?” features a prominent melodic bass line that completely shifts grooves near the end of the song. The straight ahead common time transforms itself into a jazzier 6/8 groove. As the bass line and lead guitar lines repeat themselves for some time, there’s a hypnotic effect, almost akin to the minimalist music of Steve Reich. We find ourselves enchanted by the fluid, dreamy music much as the speaker gets obsessed with his own complicated feelings. “Stay Home” is by far the longest track on the record, clocking in at just over eight minutes. It begins with about three layers of clean-sounding guitars playing different rhythms in counterpoint against a lone cymbal. It’s the most complex, full-sounding texture heard on the record. This sound goes on for quite a while, leading the listener into a trance, until the vocal comes in about three minutes into the song. After Kinsella sings the ambiguous, yet emotionally resonant line, “That’s life so social” repeatedly, the song gradually fades with a similar melodic pattern as it opened with.

Clearly, American Football didn’t change the music industry as we know it or make a record universally acknowledged as a masterpiece. They did, however, make an album that occupies a unique emotional and musical space. The band name American Football conjures up images of autumn for me, of raking leaves in the yard or watching the NFL on TV. There’s always that strange feeling that overcomes me in the fall of sensing that everything is dying yet will one day be renewed. My inner sixteen-year-old self wants to believe this, and American Football forms the perfect soundtrack for these thoughts.