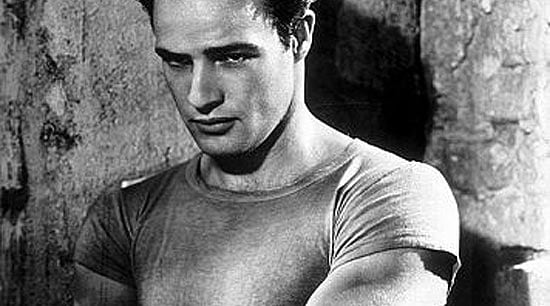 Marlon Brando died a joke. It’s sad, but it’s true. The man considered the greatest actor not just of his generation but of the modern age of cinema spent his twilight years under a public perception of him as being morbidly obese, cantankerous to the point of ridicule and prone to acting in awful films such as 1996’s The Island of Dr. Moreau. And while some of that can be justified as fact, it’s tragic that a man so supremely talented should have left this world with anything other than plaudits. And that is why I went to watch A Streetcar Named Desire (1951) knowing Brando as Superman’s dad and Colonel Walter E. Kurtz, rather than the slab of raw humanity that is Stanley Kowalski. I also went into it not realizing that, for a movie about the mistreatment of women, it didn’t seem all that favorable towards their gender. Instead, it seemed to idealize the idea of femininity over females themselves, not unlike its own central character.

First, a little back story. Adapted from Tennessee William’s (who co-wrote the screenplay with Oscar Saul) 1947 play, Streetcar concerns Blanche Dubois (Vivien Leigh), a fading Southern belle plagued by alcoholism, mental instability and worst of all, surroundings that do not befit her as a lady of taste and delicacy. After “losing” the familial estate of Belle Reve in what remains vague circumstances throughout the film, she moves to New Orleans to stay with her sister Stella (Kim Hunter) and her husband Stanley Kowalski (Brando). It’s telling that Blanche’s first action in New Orleans is to wander off the train, looking vaguely around for the titular streetcar that is to take her to Elysian Fields, Stella’s dilapidated apartment complex. To paraphrase the most famous line of the story, she always depends on the kindness of strangers; of course, that means that she also has a certain expectation that all she has to do is appear lost and vulnerable and she will get what she needs.

Before viewing, I knew that the film version of Streetcar had a reputation for watering down the controversial aspects of Williams’ play, which isn’t surprising for 1951. As directed by the legendary Elia Kazan (who would go on to work with Brando and co-star Karl Malden several more times), even a cursory knowledge of the play shows the themes of homosexuality and domestic violence being diminished from the original. But that had the interesting effect of bringing less salacious aspects to the forefront, like the simmering class resentment between Stanley and Blanche, or the overt chauvinism expressed towards female sexuality. Although Blanche is portrayed as largely a victim, it’s also difficult to not see a bias against her in both the attitudes of the other characters and the story itself. She’s a woman who’s been broken by reality, unable to live in the fantasy world that her younger life afforded her; the Old South has fallen and all her pretenses to courtliness and poetry don’t alter the two-room apartment she shares with her sister and brother-in-law. She’s pitiable, yes, but Streetcar also portrays her as a snob and a racist, her sense of dignity buoyed by a sense of superiority over others. More than that, when Stanley finds out about her sordid past in Mississippi (which is largely left unsaid, but to put it delicately, she met a lot of men briefly), there’s nothing to indicate that it’s not shameful that she’s a sexual person. If that was an isolated occurrence, it’d be one thing, but when her suitor Mitch (Karl Malden) rejects her for her past with no real ramifications for him and her brief seduction of a young paperboy is displayed as a moment of weakness and shame for her, it began to make me feel queasy. She’s a victim as long as she represents the fall of Southern femininity, but once she’s a woman with sexual appetites and mistakes, she’s punished. 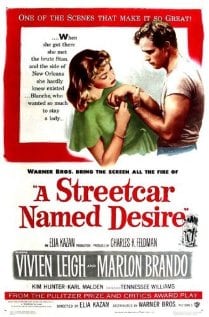 But you know who is allowed to have sexuality? Brando. And whoa, does he have it. There’s barely a scene in which Stanley is present in which he’s not sweaty, energetic, in some state of undress or just plain radiating masculine sex. I’m not saying Streetcar contains a deliberate double standard, but it’s notable that Stanley is lionized for his sexual energy (most emphasized through Stella’s devotion to him) while Blanche is demonized for hers. And yes, you can take that as a condemnation of that double standard, but if that’s implied, it’s pretty well hidden under the sight of Stanley’s bulging arms (not to mention, subtlety is not exactly the strong point of a play that literally calls a dump “Elysian Fields” and Belle Reve translates to “Beautiful Dream”). The only real consequence of negative male behavior towards women is in the final moments, where it finally takes Blanche being institutionalized after her rape by Stanley for Stella to leave him, but it’s of note that that’s only in the film version, presumably to comply with the strict Motion Picture Production Code and not to Williams’ liking.

Watching it now, it’s difficult to separate the attitudes of the film from the times that produced it. My reaction to the mistreatment of Blanche (while still disliking her as a character) is at least partially knee-jerk, making it hard to try to read any subtexts that might exist under the rawness of the story. It’s just as difficult to imagine that rawness with any other actor than Brando; even after the decades that have passed since Streetcar was released, his performance is shocking and passionate, animated in a way that few actors could even conceive yet portray. And for a performance that’s known largely for brutish behavior, it’s amazing that the small details make the character. Stanley may be strong and violent, but it’s his humanity that remains in the memory. He smashes tableware and flings a cup against a wall, but the way in which he momentarily fumbles with it makes him more than a caricature, it makes him someone unable to control himself. Perhaps that’s why Stanley and Blanche are such opposites as characters: both unable to control themselves. He can’t control himself in the world he lives in, but she can’t control the world itself, and must suffer for it.