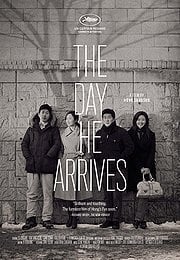 [xrr rating=4.5/5]Considering the subject, the best way to review Hong Sang-soo’s latest might be to rephrase Trevor Link’s excellent summation of Oki’s Movie, which came out last week and, unsurprisingly, involves many of the same themes, moods and methods as this film. There are crumbling relationships, college professors and students, filmmakers and actors, off-kilter zooms, as well as the requisite glut of scenes featuring drinking and discussion. Basically, it’s wall to wall evidence that the director is yet again making the same.

Even if that was true, The Day He Arrives would be worth seeing. Shot in crisp black and white digital, it captures a snowy Seoul populated by a gallery of weirdos and fools, characters whose neuroses are sharply realized and beautifully expressed. But this is also Hong’s most formally adventurous movie yet, a looping exercise which perfectly integrates his usual narrative concerns into its structure. Where Oki’s Movie ended with a bifurcated jaunt that broke from the story’s chronological path, this film embraces chaos throughout, telling a fragmented story whose exact chronology is impossible to determine.

Returning to Seoul after a few years absence, middle-aged director Seong Jung (Yu Jun-Sang) has decided to stop making movies, a decision that gives him more time to drink shochu, amble around aimlessly, and catch up with old friends and enemies. Yet the world he reenters is more of a dream than reality; everyone he meets has some significance to his past, and the weird use of time and repeated locations suggest that he’s trapped in some sort of limbo. Hong plays up the confusion by keeping the chronology misty, using subtle shifts and anachronisms to suggest that these are scattered glimpses of possible happenings, rather than a neat succession of events. Imagine Last Year at Marienbad as an anxious, booze-soaked comedy.

So Jung returns to his old girlfriend, argues, cries, makes up and then leaves her, only to take up with an identical-looking woman with a different name, both played by the same actress. He has one awkward run-in with an old acquaintance after another, and the woman’s noting of these meetings is one of the only hints that these events are linked at all. The overall effect is disorienting and enchanting, akin to Alain Robbe-Grillet’s La Maison de Rendez-Vous, placing both characters and viewers on a swirling merry-go-round.

Hong has always been big on repetition, and the events contained in The Day He Arrives present the clearest distillation of those themes yet. The characteristic image of his oeuvre comes near the end of 2006’s Night and Day, with a pig butting its head against the opaque window of a women’s gym. This film isn’t as directly focused on male folly as some of his others, but the compacted world he presents here maximizes the power of his ideas without too much direct emphasis. This is mostly because the inherent interest stirred up by the ongoing trickery of the narrative, which maximizes the power of Hong’s subtle characterization and odd comedy.

The complicated formal confusion works well as a counterpoint to the minimalist story, where the most dramatic scene involves people unsuccessfully trying to hail a cab. The collusion of the two helps to masterfully smudge the line between the magical and the humdrum; every routine conversation seems a little dream-like, every dream-like coincidence seems a little routine (like the great early scene where Jung abruptly freaks out, runs off and leaves his confused standing in the street.) In this fantasy version of Seoul, where everything has either repeated or is in the process of doing so, the tricks of a romantic hustler, the empty promises of an old friend, or the thrill of a kiss timed with the year’s first snowfall, all seem strangely hollow and ridiculous.