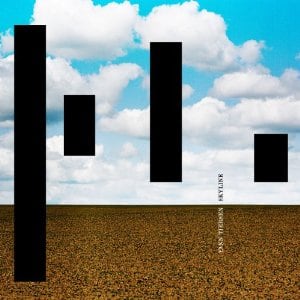 [xrr rating=4.0/5]Though Yann Tiersen’s career spans 17 years and during that time he’s released over a half dozen LPs and worked on many more collaborative projects, he’s still most associated with his soundtrack for Amélie. This is understandable; his whimsical squeezebox and piano melodies did, after all, make everybody fall in love with the adorable peculiarities of Audrey Tautou a decade ago. But as the 21st century progressed and Tautou slipped far below Zooey Deschanel in the quirky girl power rankings, Tiersen continued to churn out records, including two more soundtracks for the films Good Bye Lenin! and Tabarly. He branched out into new territories with 2010’s Dust Lane (his first LP not titled in French), striking a darker and more somber tone, which makes sense given that he recorded the album in conjunction with his mother’s death. His latest release Skyline (his seventh LP) continues down a similarly wistful path.

It’s easy to see why Tiersen is largely considered a soundtrack guy; his music lends itself especially well to the screen, each self-contained song as sensuously ripe as a CGI-enhanced movie scene. His sound, it seems, is much too big for the basement studio in Paris where he frequently records, but containing so many bells and whistles (and Glockenspiels, toy pianos, harpsichords and Theremins), his cluttered workshop must make for a cozy fit.

Tiersen’s robust sound and transcendent reach is on full display in Skyline’s opening track “Another Shore.” Beginning with toy piano and acoustic guitar plucks, the track soon surges with distortion and trilling synth that ebbs and flows throughout the track. “I’m Going to Leave Anyhow” introduces the album’s first vocals, ethereal and often resembling those of Air, even though the repetitive lyrics consist only of the song’s title. “Monuments” opens with warbling wind chimes and a delicate gong that sounds like the striking of a meditation bowl. The vocals gurgle with the waterlogged quality of Ween’s “The Mollusk” while blending with riffs of a Modest Mouse-like guitar crunch. By this point, the underlying haunting tone of the album makes it clear that Tiersen has strayed into much rougher emotional terrain than the fluffy whimsy of Amélie. There’s no mental imagery of crème brûlée or bubble wrap, though some of the chimes may sound similar to a cat’s dish striking tile. If the delightfully grotesque music video animation for both “Another Shore” and “Monuments” is any indication, the mood falls more in line with the surrealist imagery of Jean-Pierre Jeunet’s other great film The City of Lost Children.

Tiersen opts for vocal samples in the uplifting and therefore deceivingly titled “The Gutter.” Loudspeaker audio of a Spanish speech opens and then gives way to pristine female vocals accompanied by the clash of cymbals and twang of mouth harp. If it’s not already obvious, listening through headphones is almost a requirement of Skyline in order to catch the instrumentation’s entire scope. Otherwise, a flitter of flute or tinkle of a chime can be so fleeting it’s easily missed. The most fascinating sonic contrast takes place on “Exit 25 Block 2o,” as feral howls and yelps ramp up tension over a cyclonic synth that spirals upwards as the toy piano plinks on. The animalistic screeches, so abrasive at first, eventually melt into the fury, making the confluence of diverse instruments exhilarating in its audacity but not all that easy on the ear.

What’s most surprising about this album when compared to Tiersen’s earlier work is the amount of distortion; there’s almost always an underlying buzz or a hint of reverb even in the most minimalistic moments. The wonderfully titled “Hesitation Wound” showcases this with a plodding, mournful approach that pulses with underlying static even when Tiersen throws in hints of violin or rapid-fire arpeggio keys. Penultimate track “The Trial” is really Tiersen’s parting shot. A slow-burn at the onset, the track revels in its choral arrangements, paired with a metallic clattering that calls to mind jostling train cars, before ceding to the album’s most unadulterated vocals that rise up without warning and overwhelm.

A decade after Tiersen’s flirtation with the mainstream in Amélie, Skyline proves his art is not for the casual listener. Recognizing the depth of what he’s crafted requires a discerning ear and the patience to sit back and soak it all in. Tiersen pushes Skyline to the brink of cacophony but then pulls back with precision, settling into sparse piano or a gently strummed guitar. His vision is vast and it’s fitting that he pairs so well with the cinema. He creates sounds so complex you can almost see them.