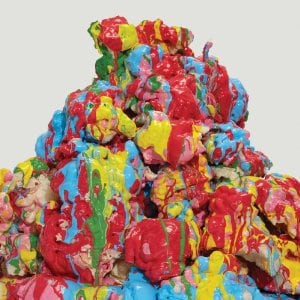 [xrr rating=2.5/5]To fully disclose, last summer I returned from a mostly non-internet/communications-free month-long trip to come home and continue the daily habit of opening my laptop notebook as frequently and as routinely as any human being opens their bedroom blinds. During my orientation back into the world, and specifically to the digital platform, never can I recall a time where I saw more website banners, pop-ups and blog decals brandishing the bright bubblegum pink spray on goo of Battles’ Gloss Drop. Their campaign to release the greatest electronic/rock hybrid success album put me off Battles. In other words, they were trying too hard and my subjective aversion to Battles only continues with the follow up Dross Glop.

If the newest incarnation of the band’s media hype-laden Gloss Drop didn’t give you a headache, then Dross Glop probably will too. Flashy, synth-doctored and software-treated, the remix album to last summer’s Gloss Drop features all of the original release’s songs. Flavored distinctly by some of the biggest names in the contemporary electronic world, this flamboyant companion piece compliments the showy and calculated parent album. The remix artists, many of which such as the Field, Shabazz Palaces and Gang Gang Dance had just as big of a year as Battles did, offer distinct interpretations of “Sweetie & Shag,” “White Electric” and of course, “Ice Cream”.

Gloss Drop was a highly organized mess of rowdy percussion of an almost academic sort, rich samples and eclectic guest vocals from the likes of Gary Numan, Kazu Makino and Matias Aguayo. The remix companion album works in a similar way except the singles are harder to pick out. And to its credit, Dross Glop doesn’t exactly have that readily discernible agenda to convert Battles’ material into club-bangers to keep new and old Battles fans at bay until the next record comes out. Kangding Ray’s remix of “Toddler” for instance stretches that tape-recorded effect of a treble-forward guitar of the original track from one to six minutes long, for a full transformation of the song from a sketch to a hazy, IDM-light sleeper.

There’s some good stuff in here, no doubt, but it just feels promotional. Each remixed song is invariably characteristic of the artist doing the remixing. From the weird bounce of Gang Gang Dance for the “Ice Cream” remix to Gui Boratto’s re-appropriatation of the skittering original of “Wall Street,” Dross Glop acts mostly as mediocre supplemental material. Gang Gang Dance’s reclick of “Ice Cream” entitled “Ice Cream (BDG #Gang Gang Dance Remix)” matches Battles’ energetic disposition while Boratto’s version of “Wall Street” compliments Battles’ playfulness with dancey lineage. Some songs though are totally undone and unhinged like Qluster’s take on “Dominican Fade” where the original “Fade” is almost completely untraceable.

I can appreciate the color-inverted album art of the 12″ singles featuring cuts off of Dross Glop but its ubiquity and intention to reach as many people as possible doesn’t seem to necessarily match up to any natural impact their music has. Battles is an interesting, innovative band but their approach to releasing an album, namely with Gloss Drop and Dross Glop reminds me of that super good looking dog that you can’t wait to pet until it jumps up on you and smells your crotch.