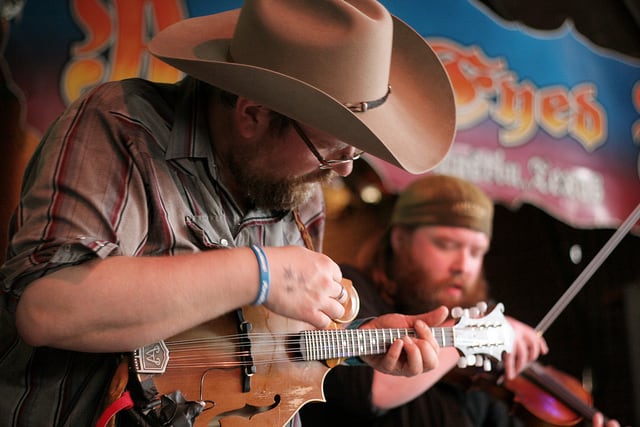 Trampled by Turtles, a progressive bluegrass band from Duluth, Minnesota, are known for their raucous, insanely speedy jams. Their music is a stimulating hybrid of punk-rock energy and jam-band virtuosity. Audiences attending a Trampled by Turtles show have come to expect frenzied fiddle solos by Ryan Young, lighting-speed banjo rolls by Dave Carroll and aggressive vocalizing by frontman Dave Simonett. After you’ve heard them tackle a fast-as-lightning tune like “Risk,” you understand how appropriate their name is. When you see the group on stage, they seem like innocent acoustic musicians who would never harm anyone. Once they start playing, you understand that indeed these turtles have the power to trample anything in their way from the sheer force of their talents.

The group delivered a nuanced, musically impressive performance at Metro. Songs from their new record Stars and Satellites, a slightly more mellow effort than their previous album Palomino, dominated the set list. The band played almost as many ballads as they did brisk barn-burners. I was excited to see the group explore their more sensitive side, for it proved not only their virtuosity, but their versatility. They injected just as much heart and soul into the slow tunes as the crazy, jammy instrumentals.

Despite the band’s superb musicianship, the show didn’t fully resonate with me. The audience, a sold-out Friday night crowd at a venue right across from Wrigley Field, had a lot to do with the dissatisfaction I felt. They came ready to party and socialize, not so much to listen to music. The people standing around me seemed uninterested in appreciating the subtlety of the band’s performance. They spent most of their time talking loudly, even during the show’s quieter moments. Trampled by Turtles often functioned more as a bar band that happened to be playing in the background rather than the center of attention.

To be fair, I arrived slightly later to the gig than I had hoped, therefore didn’t get a prime spot in the crowd. I did move around to several locations during the show, however, and found that the audience climate was quite similar wherever I went. I sometimes had to strain to fully hear the band during more gentle tunes like “Midnight on the Interstate” or “Beautiful.” Although Metro’s sound system is usually decent, the acoustic instruments didn’t cut through the sea of noise surrounding me. The audience was more engaged during the fast-paced Palomino tracks “It’s a War” and “Wait So Long,” two of the band’s most popular tunes among their fan base. They put down their cell phones and stopped gabbing about their stressful work weeks long enough to sing along and bob up and down to these songs.

To Trampled by Turtles’ credit, the show at Metro filled me with the desire to see the band again in a better setting. There is no denying that this is a talented group with a fun spin on bluegrass and jam music. I am excited by the dynamic range they show on their latest record. It’s just too bad that the subtlety and versatility couldn’t compete with the often indifferent crowd.