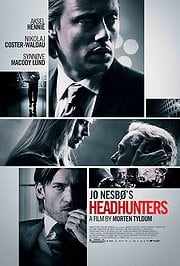 [xrr rating=3.5/5]What’s been going on with Sweden and Norway lately? See, many of us in the United States believe in the stereotype of a land of beautiful blonde people living in relative happiness, basking in socialist ideals and universal health care (we’ll forgive them Ingmar Bergman, that sour crabapple). But darkness has been oozing from Scandinavia as of late. Whispers of right-wing extremists and political murders have wafted to us from across the sea. The trial of mass murderer Anders Behring Breivik tops the local headlines. Hell, the deceased Stieg Larsson has made millions on his Dragon Tattoo books and subsequent film adaptations. This is no longer the Scandinavia that shocked the world with the I Am Curious films. There is just something downright lurid happening over there and Norway’s latest export, Headhunters, will not do one damned thing to change that trend.

Morten Tyldum’s film is a nasty little confection about a professional headhunter who moonlights as an art thief. Soon enough, he gets in over his head in shit (literally and figuratively) when he attracts the attention of the wrong people. Perhaps Tyldum is making a grand statement about the financial crisis in Europe but that is a big reach. Ignore the metaphors. Headhunters is nothing more than a grisly, darkly comic ride that will appeal to those who loved Larsson’s garish, tawdry books.

As the film opens we meet Roger (Askel Hennie, playing smarmy like a young James Spader), the headhunter who steals priceless paintings. For an art thief, Roger is quite insecure. He bemoans his 5’6” stature and keeps his hot wife in baubles out of fear she will leave him. Roger is a complete head case and things are about to get much, much worse for him. His wife introduces him to Clas Greve (Nikolaj Coster-Waldau), a chiseled (and tall) Dutch businessman who supposedly has stumbled upon a genuine Rubens painting when cleaning out his grandmother’s apartment. Naturally, Roger takes the bait and hatches a plan to steal away the painting. This kicks off a violent odyssey that leads Roger through double-crossings, dog bites, murder and more than one near-death scrape.

Roger is a scoundrel. He cheats on his wife. He is vain and selfish. Hell, he’s a thief. However, Tyldum populates his film with characters so much less likable that we cannot help cheering for Roger as he tries to escape Clas, who turns out to be a professional tracker. The dark comedy here feels similar to a Coen Brothers film in tone, yet a less successful Coen film where we have trouble connecting to the characters. There is no folky charm a la Fargo or Raising Arizona. But that’s okay, it’s fun to be nasty sometimes and Headhunters has that in spades.

So what’s not to like? At times, Headhunters rubs our face in the smut and the shit for no other reason other than to flaunt its salaciousness. But in some ways it’s more successful than the Dragon Tattoo series. Unlike Larsson’s work, which tries to hide its pulp fiction colors, Headhunters makes no bones about its trashy subject matter. It’s fun, it’s gory and then it’s over. The lack of resonance is an impediment but like any confection, who wants it sticking around much longer than it takes to ingest it?