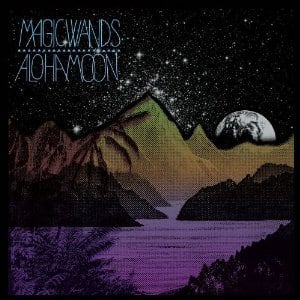 [xrr rating=3.5/5]Perhaps a name/album combination has never been as apt as Magic Wands’ Aloha Moon. The name conjures images of bright, delicate strokes, of sparkles and atmospheric manipulation, which is precisely the sound that the self-dubbed “lovewave” group has hit upon on this, their full-length debut. Having previously released an EP in 2008, the duo of Chris and Dexy Valentine are a younger and brighter-eyed version of High Places, aka 2000-era Mates of State and their sheer excitement for their work and one another shines through every bubbly second of this album. They’ve pieced together an ebullient album, one that flows and ebbs against itself with a welcome ease.

Although a number of these songs are holdovers from the Magic, Love and Dreams EP, they serve their purpose in highlighting how the band members’ instrumental interrelation is sharper than ever. “Teenage Love” shines and bubbles with a breezy synth line that sounds repurposed from “Genius of Love” and is just as smile-inducingly cheesy, especially with the silly yet clever deadpan of the lyric, “Call me up on the telephone/ Late at night when you’re all alone/ This teenage love has got me stuck/ Cove over now so we can/ Forget about everything.” It’s a precious moment of humor that simultaneously mirrors the goofiness of unbridled young feelings and makes a statement, a resonant thought that will then carry over through the album.

Dirty and scuzzy synth on “Black Magic” acts as a velvet buzzsaw that both Chris and Dexy have control over and wield with charming menace. These early recordings pulse with a real understanding of structure and fills, which informs the success of the newer material. “Crystals,” one of the newer tracks, is on some slinky “just fucked Robert Palmer in 1986” shit, with Dexy’s hauntingly buried vocals attempting to escape the kinetic, swirling haze of the slicing keyboards and heartbeat percussion. It could have been at home on the previous EP but on this record it comes across as a flagrant mission statement- the sonic equivalent of a protest chant.

While the theme of Aloha Moon may be the joy of the night and the moonlight, it can also conversely be interpreted as the relief of a sunrise. Either one can be applied to sublime closer “Space,” which mixes Dexy’s sultry vocals in a flatter tone (think Lana Del Rey if she could sing/wasn’t awful) and they intermingle with Chris’s over the mantra-style refrain of “Say we’ll always be together/ Say this love will last forever,” creating a fabulous moment of doubt, a slip in the sunniness that makes questioning all the previous proclamations almost a necessity. This track also explores well, with expansive guitar lines and vocals moving in and out of levels giving it a breathy feel. At a tight 35 minutes, even with three songs from a previous release, Aloha Moon is a well-constructed and catchy piece of guitar and synth led pseudo-shoegaze. It’s two bodies on a gorgeous beach in silence – are they vibing off one another, too excited and content to say anything, or in the beginning stages of drifting back out to sea like the tide?