Despite the heavy controversy that swirled around its 1992 release, Spike Lee’s Malcolm X has by now established itself as a bulwark of the biopic genre: a stately, gravitas-streaked portrait of a great man, as helmed by a preternaturally wild director learning to quell his more destructive impulses. This doesn’t mean that it’s a great movie. Lee’s longest feature is still marred by weird flights of fancy, still a little too reverent of its subject, and still a little too puffy for its own good. But it’s a remarkable cinematic portrait and works much better than it probably should, avoiding many of the problems that could easily have befell this kind of project.

Still, despite all the restraint Lee exhibits in profiling one of his heroes, those expecting one of his characteristic overblown gestures don’t have to wait long. Like many of the director’s films, Malcolm X starts off with a bang. Backed by martial music, the opening sequence cuts between footage of the Rodney King beating and a full frame shot of an American flag that is on fire. The flames eventually burn their way into the shape of an X, and the two images here act as introductory shorthand of the film’s prevailing concerns: the status of black people in 1992 America, and the journey of this spitfire figure into the pantheon of American heroes.

This intro doesn’t fully connect, because while the film is rightly fixated on the process behind the latter point, it isn’t really that interested in connecting its story from the present day, aside from its ambitious beginning and ending sequences. Although largely set in the ‘50s and ‘60s, Malcolm doesn’t dwell on the unfairness and segregation of the time; this isn’t a film about the evils of institutionalized racism or the cruelty meted out by whites. In fact, there’s only one significant white character early on, with the rest remaining on the fringes, as corollary figures (a judge, a reporter, a cop, a student). Befitting the focus on black identity, they appear as detached symbols of an outside world, providing scale and context, as we follow Malcolm’s progress from petty criminal to fiery separatist to community leader. 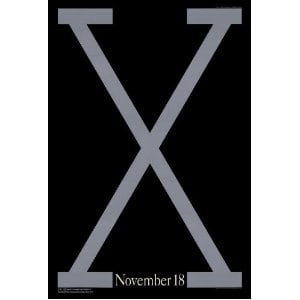 Aside from this clear sense of focus, the best thing about Malcolm is that its reverence never completely sinks into worship. The 200 minute plus length allows time for an even-handed, comprehensive image that’s unusual for a biopic, with as much time dedicated to the man’s criminal past as to his more positive permutations. Much was made of Lee’s wresting of the project from Norman Jewison, insisting that the material required a black director. But Lee was probably right, because it’s hard to imagine anyone else having this much comfort with the subject. His biggest coup is making Malcolm unlikable – despite the charismatic force of Denzel Washington’s performance – for the majority of the film’s running time. Before eventually establishing himself as a leader and martyr, the erstwhile Malcolm Little takes turns as a ghetto clown, a haughty inmate and a humorless mouthpiece, a progression that follows him sinking into dourness before emerging as a complete man, motivated entirely by his own ideas.

This is a grueling process, but it’s essential to the film’s lesson. It’s only as Malcolm emerges from the darkness, forming a persona conceived by himself rather than fitting into the molds imposed upon him by others, that he really becomes a hero. This means that while things do eventually devolve into standard-issue hagiography, that reverence emerges from a real place, only admitting the subject’s sanctity after he’s reached the point of truly deserving it. This is signaled, like Malcolm’s other transformations, by shifts in appearance and clothing; he returns from Mecca with a goatee, a dressed-down style and a broad smile, a marked difference from his staid Nation of Islam garb.

It’s in these lasts scenes where the film’s formal progression comes together with the true account. It makes for a great double-edged conclusion, pointing out that enlightenment isn’t necessarily matched by victory. By forging his own identity, Malcolm not only pulled away from the pack, but also assembled a huge list of enemies. The shadowy nature of the plot against him is never clarified – there’s no dip into conspiracy theories or fictionalized history – and Lee plays up the creeping dread with repeated insert shots of spinning tape wheels, which indicate that his conversations are being recorded, while never establishing who’s doing the recording.

This makes for an ending that’s both triumphant and tragic. This double-edged resolution provides the perfect capper for this perhaps overlong film, solidifying its structure, which allows Lee’s stylistic quirks, primarily his penchant for pointless camera movement and over obvious long shots, to thrive without letting them run rampant. The inevitable occurrence of the director’s signature touch, where the subject stands on the dolly platform to convey the appearance of floating, is used perfectly as Malcolm draws to a close, capturing a man who’s both victorious and doomed, self-possessed and helpless, gliding along on the way to meet his fate.