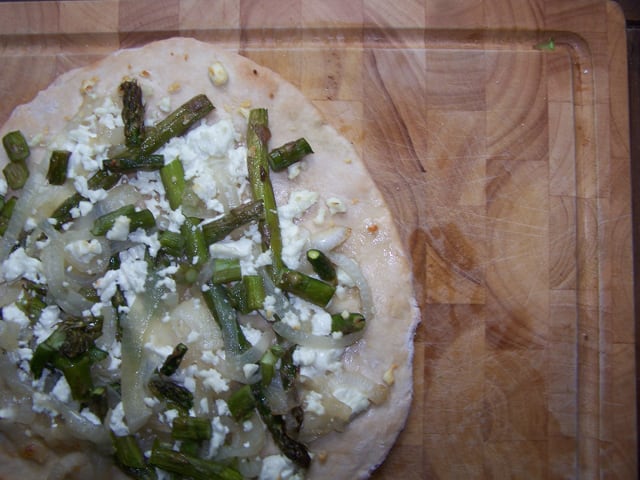 Some people look to the groundhog’s shadow to figure out when spring begins. For others a witch hazel’s first bloom, or baseball’s opening day signify spring’s awakening. For me, I know spring is here when two things happen: every New York City food related publication will publish an article about ramps, allegedly wild leek type vegetables whose appearance I have yet to ever see in a Long Island farmers market and the appearance of glorious fresh asparagus in those markets. I may not be able to jump on the ramp article orgy train but I can wax poetic with the best of them about asparagus season. It’s really the only time to eat them and feel good about it. Leave me to my own devices and I’ll prattle off asparagus dishes like Bubba Blue on a shrimp boat. “Shaved asparagus salad, asparagus puree, asparagus and prosciutto, hollandaise and asparagus with poached egg.”

The arrival of those spears of joy not only marks the start of spring, it also signifies the start of the seasonal eating calendar for me. Around the house we’ve started a tradition called “Market Pizza Mondays” in which we’ll buy whatever is fresh in the local farmers market and attempt to make a pizza out of it. Ahh yes, it’s the simple things in domesticated life that keep you entertained.

A few notes on making pizza in the home kitchen. Don’t expect your homemade pizza to be a perfect replication of your local pizzeria that has the 900 degree oven and generations of dough making expertise. You’ll be setting yourself up for disappointment if you don’t embrace the “do it yourself-ness” aspect of making homemade pizza. It’s important to simply accept that your crust will not be as awesome as your local pizzerias and move on. Know your oven. If it heats up unevenly, rotate the pizza halfway through the cooking time to evenly cook the pizza.

Combine all of the ingredients in a bowl. Once a ball has formed (it will be shaggy) sprinkle some flour on a countertop or cutting board and knead until the dough is smooth and elastic, about eight minutes. Wrap in plastic wrap and store in the fridge for at least an hour and a half.

Parchment paper lid (cut a piece of parchment paper that will fit just inside the skillet, fold over once and cut a hole in the middle for ventilation)

About two hours before you are ready to make the pizza, begin the cooking of the onions. Heat a large skillet over medium heat and add the olive oil, butter and water. Once the butter has melted add the onions, turn the heat to low, season with salt and pepper and cover with the parchment paper lid. Cook over very low heat for 1 ½ to 2 hours until the onions begin to turn light brown. Once done, set aside until ready to assemble the pizza.

1 bunch of asparagus (about 1 pound)

Preheat the oven to 400 degrees. Scatter the asparagus in a roasting pan, drizzle with the olive oil and season with salt and pepper. Roast for 30 minutes and then set aside until ready to assemble the pizza. Raise the temperature of the oven up to 450 when done.