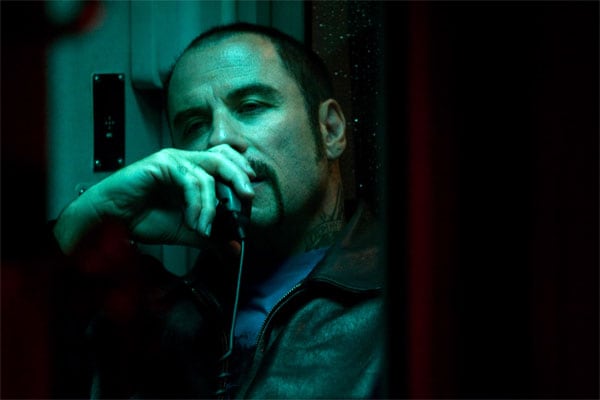 Made during the two lowest points of American faith in institutions, the post-Watergate 1970s and the post-Bush end of the Aughts, the two adaptations of Morton Freedgood’s thriller novel The Taking of Pelham One Two Three each attempt to capture something of the contemporary social attitude in the straightforward story of a train hijacking. Joseph Sargent’s 1974 original reflects the traits of ‘70s crime thrillers. It proceeds with a methodical construction that embodies the careful planning of the crime. Occasionally broken up with a slow pan or (even more rarely) a handheld shot, Sargent’s film unfolds chiefly in static shots of a mostly slow rhythm. Though set in the constantly moving world of the New York subway, this aesthetic highlights the layer of grime and filth that has permanently settled into each platform and train. 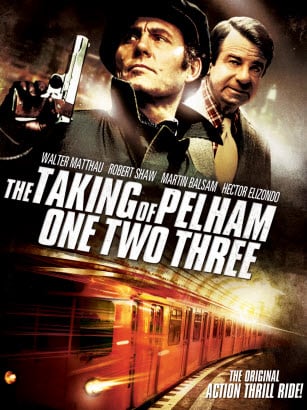 But if the subway itself is ossifying, the film around it captures a world in flux. As Sargent sets up the hijacking with a clinically precise introduction of similarly disguised criminals, he also establishes the Transit Authority that will later interact with the hostage-takers. The film introduces its protagonist, Lt. Garber (Walter Matthau), by having him give an impromptu tour of the facility to visiting officials from Tokyo’s metro system. It’s the first taste of multiculturalism in a movie that also features a hostage who only speaks Spanish as well as a black train passenger who behaves belligerently toward the hijackers with lingering, inchoate resentment over his experiences in Vietnam. In its own small way, The Taking of Pelham One Two Three captures the first stages of a globalizing America, as well as some of the racism reacting to it. But Sargent doesn’t force this side issue into the spotlight, instead focusing on the showdown between Garber and the head villain, “Mr. Blue” (Robert Shaw) and letting them do most of the work. The movie is a triumph of un-auterist skill, of a filmmaker crafting a solid, clever movie and staying out of the way of his fantastic actors. Even John Carpenter, whose dream was to be a wandering workman in Hollywood, bore a more personal stamp than Sargent uses here.

The polar opposite is true of the 2009 remake, shot by Tony Scott well into his, depending on your point of view, “cinematic abstract painter” or “attention-deficient hack” phase. Scott almost parodies the carefully paced tone of the original, beginning with gentle, sweeping views of the New York before a sudden temporal leap plunges the film into a hyperactive collage of varying film speeds set to Jay-Z’s “99 Problems.” Scott trades the mounting tension of Sargent’s basic formalism for his usual cavalcade of bright, blurred images. His take is so much more fast-paced he doesn’t even have time to write out the numbers in the title. Where the isolated, hijacked train sat in eerie darkness in the original, now rain-splashed windows break up the lights in the tunnel into paint splatters of neon blue, orange and pink, as well as obscuring the people standing behind the glass. 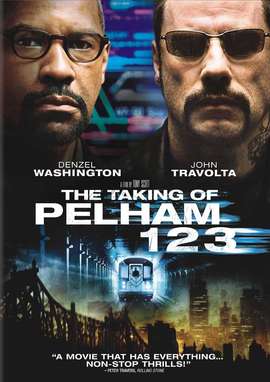 Clearly, this shinier, more schizophrenic style insists upon itself more than Sargent’s steady hand, and in all honesty, Scott’s version lacks the tension of the 1974 film. But that’s also because his focus is different: he cares less for the straightforward narrative of the standoff than the emotional and sociopolitical weight behind it. Shaw’s mysterious villain in the original is something of a blank slate, an obvious professional, but one without any clear motive. It is a stretch to tie him to his time, with the only possible connection that, in a world where the president can order burglaries and get off with a pardon, why can’t he do some thieving of his own? John Travolta’s Ryder is another story. He speaks in broker lingo, giving him away as a Wall Street type immediately despite his hysterically homoerotic biker getup. Scott slowly reveals Ryder to be a disgraced trader so outraged that he was imprisoned for his illegal practices that he decides to take his revenge on New York and Wall Street. In Travolta’s hyperbolic, profane outbursts is the unleashed id of the financial sector, viciously avenging itself upon punishments that are, if anything, too laughably light.

Scott updates the material in other amusing ways. He satisfies his big board fetish by swapping out the old-fashioned switchboard’s scattered handfuls of lights for a state-of-the-art slate of shimmering lights and alarms. (A gift from those Japanese officials who visited back in the ‘70s, perhaps?) Lee Wallace’s sickly, crowd-shy mayor is now played by a robust James Gandolfini, whose girth and scandalous affair suggest he has enjoyed the comforts of power. And where the original mayor stumbled around with a seemingly incurable illness, Gandolfini instructs his aide to have a flu shot waiting for him before speaking to a school. In the post-9/11 world, even illness is attacked preemptively. Perhaps the greatest change involves the nature of Garber. Extrapolating from the threads of multiculturalism in the original, Scott’s version places Denzel Washington in the lead role. Washington’s Garber is more complex than Matthau’s, threatened as much by the bureaucracy openly setting him up as the fall guy if this hostage situation goes south as the hostage-takers themselves. A late scene where Ryder, the villain, forces a grim confession from the hero is one of the most stunning moments in any Tony Scott film, and one of the rare cases in his modern work where he slows down to let the scene breathe.

The two Pelhams offer the rare instance of both versions being valid, entertaining films in their own ways. Neither is a masterpiece, but both take a snapshot of their respective time periods, both aesthetically and thematically. Sargent’s film wallows in the stark, quasi-nihilistic meaninglessness of America in Nixon’s wake, while Scott’s jitters and roars at a system now totally controlled by private interests, interests that can halt an entire city in retaliation for even the smallest slight. That both films manage to find something rousing in these cynical foundations is no mean feat, and the two movies hold up equally well as movies as entertaining as they are intelligent.