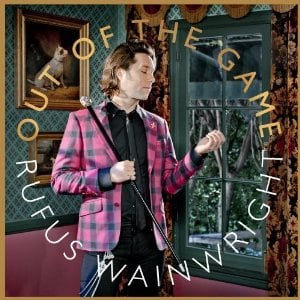 [xrr rating=4.0/5]What a twist! Ponderous songsmith and, more recently, opera composer Rufus Wainwright pairs with the Grammy-winning architect of the British soul revival, producer Mark Ronson for an album that plays both of their strengths with a dramatic crescendo and a dance beat. Wainwright’s last album, 2010’s All Days Are Nights was a somber affair heavily influenced by the death of his mother, so Out of the Game reaches for the other extreme: straightforward, modern pop with nary a baby grand in sight.

Without repeating himself, Wainwright successfully recreates the best parts of his earlier works. The wordplay and dynamic vocals of standout track “Jericho” are as good as anything on 2003’s Want One. The deftly placed horns are sweetly faithful to the biblical tale and fit within Wainwright’s oeuvre. Personal and melodramatic, the lyrics are also a bit cheeky and staggered in length, giving the whole song the feel of walls about to crumble. Wry and cutting, “Rashida” recounts a snub by “Parks and Recreation” star and Ronson’s former fiancée, Rashida Jones. The move brings out, once again, a Poses-like ire and craving for status as he details preparations made for the event in between thanking her for giving him an excuse to stay home and write a song.

On the title track, one-time man about town Rufus Wainwright has some strong words for young gay men like his Poses-era self: “Look at you suckers!/ Does your mama know what you’re doing?” Innuendo aside, such a joyfully delivered appeal to maternal disapproval would have been a credible threat for a young Rufus, whose relationship with his father is famously fraught. As on All Days are Nights, the late Kate McGarrigle looms throughout the dozen songs. Though Wainwright doesn’t mourn her as immediately until the closing track, she pops up here and again on “Montauk,” which has the father of a one-year-old looking forward to the time when his daughter will be embarrassed by her garden-pruning, kimono-wearing fathers. The sweet lullaby hopes she will continue to visit them despite their faults and quirks, an honest transparency repeated on the tracks about Wainwright’s partner, Jorn Weisbrodt. Though the singer is reputed to be a bit of a diva, “Respectable Dive” and “Song of You” are self-effacing and apologetic even if they are still more about Wainwright than Weisbrodt. The latter particularly allows Wainwright to indulge his penchant for mourning wails as he promises like a French poet to “Try/ Really, really tryyyyyyyyyy” to find the one melody out of millions that fits his partner.

Not every track centers on emotional upheaval, fortunately; “Bitter Tears” succeeds as a dance track and somehow gets Wainwright to deliver in rapid fire rather than his usual drawl. With an oom-pah band and a Roaring ‘20s feel, “Welcome to the Ball” is the type of track that makes you wonder if Wainwright’s ego feeds his music, or vice-versa. These lightweight tracks stand up on their own but they’re more useful when bolstering the emotional tracks and demonstrating Wainwright’s broad songwriting capabilities.

Closing track “Candles” is his most touching ode to his mother to date, a seven-plus-minute retelling of trips to light candles in cathedrals and an ongoing portrait of his mourning. It opens with his mother’s signature instrument, the accordion, and ends with a beautiful, funereal bagpipe solo. Wainwright and Ronson toe a fine line between over- and under-production, but the sighing backing vocals are so perfect, you can overlook the stiff drumming that interjects late in the song. As open and heartfelt as anything Wainwright has ever written, “Candles” alone would have made this album one of his best to date.

Rufus Wainwright has a habit of setting an intention for an album and taking the exact opposite path. Before recording Release the Stars he traveled to Germany intent on writing for piano and voice; those sessions produced his most sweeping, lushly orchestrated album to date. Now his best attempt at stepping Out of the Game reaffirms his effortless coolness and sustained musical prowess. Wainwright remains very near the top of his game these days, deserving of every accolade this album is sure to garner even if Mark Ronson himself can’t drag Wainwright to mainstream stardom.