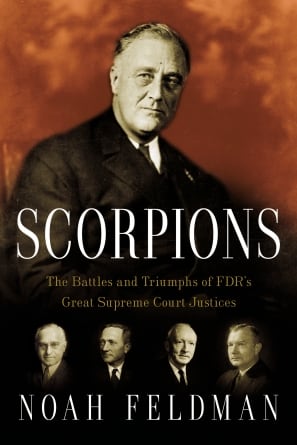 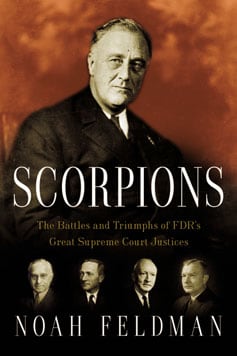 “So there’s this Yankee, a Westerner in a cowboy hat, an ex-Klansmen and a Jew…” Though this may sound like the beginning of an off-color joke or the panel for a trashy daytime talk show, it is actually the backdrop for Noah Feldman’s outstanding Scorpions: The Battles and Triumphs of FDR’s Great Supreme Court Justices. A thorough examination of the constitutional philosophies and rivalries that would ultimately divided four of Roosevelt’s appointments – Robert Jackson, William O. Douglas, Hugo Black and Felix Frankfurter –Scorpions offers a carefully considered account of how these men shaped the Supreme Court. Feldman likewise masterfully shows how each justice’s theories developed over time, and how these would eventually either be supported or contradicted in a series of court decisions that helped define modern America.

As a biographer Feldman is meticulously detailed and mainly impartial, both in depicting the men’s rises to the Supreme Court under Roosevelt and in the years after his death. The author provides enough anecdotes to give the reader a clear sense of each man’s personality and how it shaped his constitutional beliefs. Frankfurter emerges as perhaps the most contradictory – and, it must be said, officious – judge; ironically, his originally liberal concept of judicial restraint would later be embraced as a conservative ideology. Black is portrayed as equally complex: joining the Alabama KKK in the 1920s to advance his political career, he would evolve into one of the Court’s more enlightened judges in the advancement of civil rights. Douglas – the Westerner who harbored presidential aspirations and nearly met them – ended up as the Court’s longest-tenured judge and one who clearly understood the power of persona: as head of the SEC, he’d made it a point to be photographed with a six-shooter on his desk. The author holds a large degree of admiration for Jackson, a backwoods lawyer who’d led, to mixed reviews, the prosecution at Nuremburg; more poignantly, Jackson tended to be something of a loner, a reserved, introverted man who by all accounts died thinking he was a failure as a judge. Feldman brilliantly works four thorough biographies into a single briskly-paced narrative.

Scorpions is also a book about how the justices’ views of the Constitution were often in conflict. Each justice fiercely defended a unique interpretation of this document (Black = originalism; Frankfurter = judicial restraint; Douglas = constitutional realism; Jackson = pragmatism), and you’d better write that down, class, because it could show up on a test. These different interpretations, coupled with the inevitable clashes of culture and strong wills that emerge in close quarters, would frequently cast the men as combatants. Constitutional theory also has social consequences, and the author consistently demonstrates how the Court’s decisions impacted the country and its character, whether it was the infamous Korematsu v. United States case – which legitimized the internment of Japanese-Americans during World War II – and the landmark Brown v. Board of Education desegregation ruling. While this aspect of the book might primarily appeal to law students, it is nevertheless essential in understanding each judge’s legacy.

Feldman can be overly psychoanalytic at times, but this occurs rarely and usually he relies on evidence and legal precedent alone to form his opinions of what motivated the judges. At our most naive, we tend to envision the Supreme Court as nine wise legal minds above politics and personal ambitions, or, thanks to America (The Book), as nine crotchety old fossils with exposed genitalia. All kidding aside, Scorpions proves otherwise; in its pages these Supreme Court justices emerge not as anonymous composites or as irrelevant judges from a previous generation, but as key historical figures whose legal decisions continue to shape who we are as Americans and what we expect of our country’s highest court.