January 23, 2021
Home Music Revisit: The Monkees: The Birds, the Bees and the Monkees 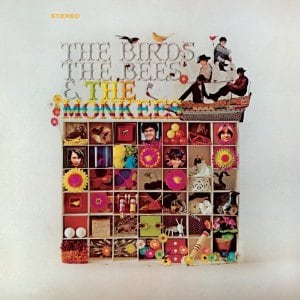 You don’t have to care about the Monkees. When Davy Jones passed unexpectedly in February, you might not have felt the same keen loss as those of us who knew every word to “Daydream Believer” long before any to “I Want to Hold Your Hand,” those of us who watched daily reruns of their zany sitcom on Nick at Nite, those of us who grew up with a Monkees fan for a parent. The glib like to shut down discussions of the quartet with, “The Monkees ripped off the Beatles,” to which I respond, “And they did it before it was cool.” Zing! Then I would like to point out that their TV show was a precursor to the music video and mention the longevity of their purest pop hits. A true Monkee geek, I would probably also mention the unknown opener they brought on tour: teenage pop fans booed Jimi Hendrix off stage. Sure, the Monkees completely misread their audience, but they knew what was up.

Knowing that the Monkees’ hits—such as “Last Train to Clarkesville,” “She” and “I’m A Believer”—hold up begs the question of how the full albums bear out. Of the nine produced in their five-year career, I opted to revisit their paradoxical fifth, The Birds, the Bees and the Monkees. This is the “Daydream Believer” album! That was their biggest hit! Yet it was also their first album not to hit number one on the Billboard charts. Most notably, the tracks were recorded in the early stages of their self-combustion. Personal aspirations, label expectations and the strain to produce and tour found the friends feuding so often that by 1968 they seldom recorded together.

Peter Tork and Mike Nesmith were certainly the “idea men” of the group, as well as the trained musicians, while Micky Dolenz and heartthrob Davy Jones were the actors, the personalities. Given the creative control they had been craving, on The Birds, the Bees and the Monkees, these very different Monkees managed to produce some of their most unique efforts even as they were torn in four different directions. Jones co-wrote some of the most simpering, generic pop with “Dream World” and “The Poster.” His voice on the former is almost unbearably nasal and it almost directly lifts the piano line from “Daydream Believer” for its introduction. Jones is much better on “Valleri,” a Turtles-y melody and guitar line piled high with the dense harmonies at the time de rigueur. Dolenz has no writing credits, though his wheaty tenor remains integral. With Tork largely absent, Nesmith shines particularly brightly, penning and singing country blues, ‘20s jazz and late-‘60s psychedelia for his and Dolenz’s gritty voices. “Auntie’s Municipal Court” pairs their voices plus a pedal steel in a satisfying country jam, while Nesmith indulges acute postal-philia on “Writing Wrongs” and “P.O. Box 9847.” The latter seems to be Nesmith’s sort of disaffected memoir-cum-personal ad, with Dolenz sighing, “I’ve been writing advertising/ That’s not really me.” From the piano and brass to the crackling beeswax, Nesmith’s performance on “Magnolia Simms” brings to mind a dancing dandy of the 1920s, rubbing elbows with Howard Hughes and Clara Bow.

Without writing a thousand-word essay on the hit itself, “Daydream Believer” is a perfect pop song, marked by Tork’s skipping piano and bright trumpets forgiving lyrics that, when struggling for sentimentality, devolve into absolute nonsense. A little too muddled on Dolenz’s vocals but nearly as strong as “Daydream Believer” in melody and arrangement, “I’ll Be Back Up On My Feet” should have been a hit; they recorded it twice and this version, produced by the band, sparkles like the album’s other hit.

Individually, each Monkee was a talent and their brief career is a case study in the whole being greater than the sum of its parts. None individually matched the band’s success and the albums where they took control (and, with it, risks) were some of their last. Still, this album is bigger than its hit and merits a few minutes of any pop enthusiast’s time.