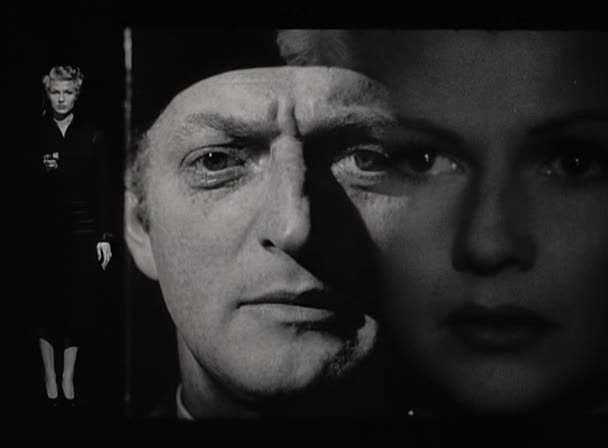 Whenever I watch an Orson Welles film, I’m always surprised by the director’s playfulness. Welles enjoys such a mythic status that his work suffers somewhat from being viewed as museum pieces, drably preserved masterpieces to be blankly respected for their artistic genius. But not even Citizen Kane is some stuffy showcase; it cracks with witty dialogue and that infamous, hysterical superimposition of a squawking cockatoo, which Welles told Dick Cavett he included simply to wake the audience.

The Lady from Shanghai, Welles’ 1947 noir, is, like nearly every film he made in Kane’s wake, horribly compromised. Edited down from approximately 150 minutes to 87, The Lady from Shanghai makes the hack-job of The Magnificent Ambersons’ second half look as fluid and graceful as a Tarkovsky film. Yet this is the one time I actually delighted in the insufferable pressure Welles faced in Hollywood. Harry Cohn demanded re-edits and re-shoots because Welles’ rough cut was too incomprehensible, and the result is one of the most defiantly incoherent movies ever made.

Throughout the film, I thought of Jean Renoir’s under-seen 1932 noir La Nuit du Carrefour, a sort of noir parody before the genre even properly existed. Renoir’s detective story unfolds in a literal haze, drifting so listlessly through tropes that, when I learned that the extant cut of the film is missing a reel, I couldn’t pinpoint where the sudden leap over 11 minutes of screen time occurred. Renoir’s suffocating picture nevertheless showed his trademark humanism in its vague feelings of despair, offering a sense of character far deeper than the elliptical plot would have provided on its own. 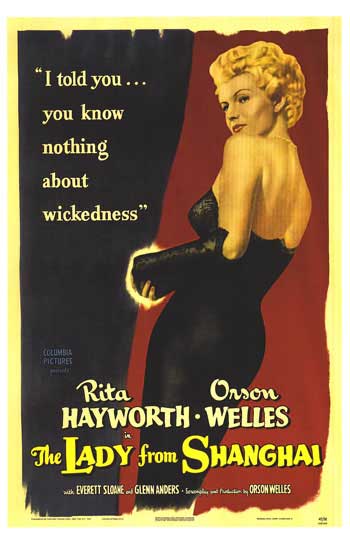 Shanghai struck me as Welles’ take on the same idea, swapping out Renoir’s elegant, texture-based approach to a deliberately nonsensical plot for a theatrical, even Brechtian deconstruction of noir. Even the voiceover narration serves to throw the audience. Welles reads in the mock-Irish brogue of his protagonist, sailor Michael O’Hara, with such a fast, perfunctory delivery that he rushes through expository details. In fact, Welles reminded me of Harrison Ford’s monotonous narration in Blade Runner, in which his resentment for having to simplify the film was made clear in his plodding, unhelpful speech.

Welles’ cheeky delivery is only part of the strange sound design, which bleeds in and out of diegetic noise to playfully break the fourth wall. Occasionally, his narration flows back into his character’s on-screen dialogue, or diegetic music becomes the score, as it does when a mariachi band inadvertently provides the exotic, propulsive soundtrack to Elsa (Rita Hayworth) fleeing one of her husband’s spies. Though it’s only a short burst of a scene, and more humorous and inexplicable than anything, the use of sound here reminded me of Welles’ endlessly lauded opening to Touch of Evil, where the score comprises colliding diegetic sounds into something unified, even thematic.

Then there are the images themselves. Welles and cinematographer Charles Lawton Jr. capture an array of gorgeous shots, with the director’s love of canted angles at unorthodox heights on full display and his high-contrast black and white adding a deceptive sense of moral clarity to the muddled narrative. Welles has as much fun with his shots as he does the story, breaking up a nautical montage with a shot of a dog merrily wagging its tail. And as much of the film occurs in San Francisco, Welles can upend the setting at any moment by ducking into Chinatown just to get some striking setpieces. Even the characters are bent into memorable images, with Glenn Anders moving into leering, sinister close-ups as he crafts a plot he shares in almost geeky fashion with Michael, essentially becoming an obsessive fan of noir as he lays out his noirish scheme. Most memorable is Hayworth’s reverse-Jean Harlow from redhead to platinum blonde, and the cutting of her locks seems to render her powerless, like a female Samson.

I don’t know what to say about the narrative, other than its incessant double-, triple- and quadruple-crosses are clearly meant in jest and should therefore be enjoyed for their ludicrous, almost required fake-outs. Grisby (Anders), Elsa and her husband Arthur (Everett Sloane) all have their way with Michael and each other, culminating in a grand farce of a trial that is the funniest thing Welles ever did. He plants gags in the background of his deep focus shots, with whispering or coughing jurors distracting the prosecutor and Arthur ultimately taking the witness stand despite being the defense attorney, meaning he then gets to cross-examine himself. In most courtroom scenes, the judge would shout, “You’re making a mockery of the court!” at this point, but even he is laughing by the end.

The film culminates in one of Welles’ most dizzying sequences, rivaled only by the Battle of Shrewsbury setpiece of Chimes at Midnight. Dumped in an amusement park funhouse to be dealt with, Michael walks his way through a surreal zone of spidering lattices, mad slides and spinning floors. The place is so crazy and gnarled it resembles less your average carnival attraction than Dr. Caligari’s summer cottage. The sequence, and the film, ends with a shootout in a hall of mirrors that is beautiful, technically daring and freewheeling, a postmodern splintering of visual and archetypal identity that literally brings the whole thing down around the characters. As with everything else in the movie, it’s stunning, vaguely despairing and more than a little funny. I didn’t follow everything in The Lady from Shanghai, but I know I wasn’t supposed to, and if you give in to its abstract collage of sights and sounds, you’ll be left with Welles’ most entertaining, lively film.