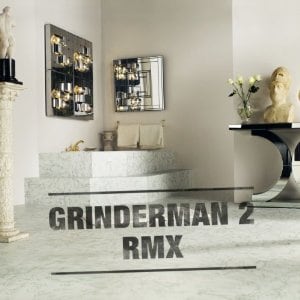 [xrr rating=2.0/5]Nick Cave’s Grinderman project was founded in 2006 as a noisy, nasty, downright dirty take on atmospheric blues-punk. Both Grinderman (2007) and Grinderman 2 (2010) found Cave weaving tales of sexual desperation and supernatural mythology against dissonant, pleasantly corrupt grooves. The announcement of the band’s breakup last December was sad enough the way it is, but now there’s the added tragedy that the last official release bearing the Grinderman name will be 2 RMX, a dreary, creatively bankrupt remix project that has virtually no reason to exist. This isn’t to say that 2 RMX didn’t have potential. The project includes some talented masterminds from several interesting genres and scenes. Unfortunately, many of the remix artists attempt to tame or subdue Cave’s unbridled sexuality and spirituality, rendering tracks that sound either overly slick or maddeningly simplistic.

Take “Mickey Bloody Mouse,” for example, a reworking of Grinderman 2 lead track “Mickey Bloody Mouse.” Josh Homme of Queens of the Stone Age deconstructs the wicked, fuzz-inflected groove of the original tune for the first half of the remix and endues the track with annoying tick-tock clock sounds that sound awkwardly lifted from a Pink Floyd record. As if destroying the song’s rhythmic vitality wasn’t egregious enough, Homme duplicates Cave’s lead vocal several times over so it loses its singular, passionate clarity. Almost as irksomely, Nick Zinner of Yeah Yeah Yeahs proves himself a staunch literalist when it comes to song titles. “Bellringer Blues” is injected with so many seas of sleigh bells that practically everything is drowned out.

Not all of the 2RMX songs are as contrived and conventional as British producer Andrew Weatherall’s rendition of “Heathen Child,” the most straightforward dance track on the record. At least “Worm Tamer,” at the hands of Oliver Ackerman from A Place To Bury Strangers, is aiming for a unique sound. Its hyperkinetic groove coupled with the shoegaze-gone-wild atmospherics is noble in its ambition, although it ultimately fails to capture the sensuality of the original. You might think that a “Palaces of Montezuma” molded by Barry Adamson, one of Nick Cave’s fellow Bad Seeds, would be one of the more successful tracks on the project, given that Adamson and Cave seem to be kindred spirits. Cave’s ex-band mate takes a minimalist approach, though, removing the “ooh” backing vocals and main drum part for the first half of the song. Sure, the original version was a bit smarmy, but the sound matched the lyrics about excess. The remix carries little of the melodramatic weight that made the Grinderman 2 track a standout.

At least a couple tracks aren’t a chore to listen to: “Super Heathen Child,” a reinterpretation by King Crimson mastermind Robert Fripp, features extended psychedelic guitar flourishes. “Hyper Worm Tamer” by Trip-hop artist U.N.K.L.E. achieves a weird blend of surf-rock, psychedelia and spaghetti western themes. Although both of these tunes are worth a listen, there’s no reason to sit through two ethereal, Rachel Zeffira vocal-centric versions of “When My Baby Comes” or three—yes three!—renditions of “Evil,” the shortest, and perhaps least successful track from Grinderman 2. Even Matt Berninger’s voice, one of the most distinctive in indie today, sounds perfunctory when placed in front of such a laboriously slow track.

2RMX will have no interest whatsoever for anyone who hasn’t heard Grinderman 2 and will serve as only a trifling curiosity for those who have. Grinderman and Grinderman 2 stand as a testament to one of the most fruitful chapters in a great artist’s career. 2RMX reminds us that sometimes it’s best to leave well enough alone.