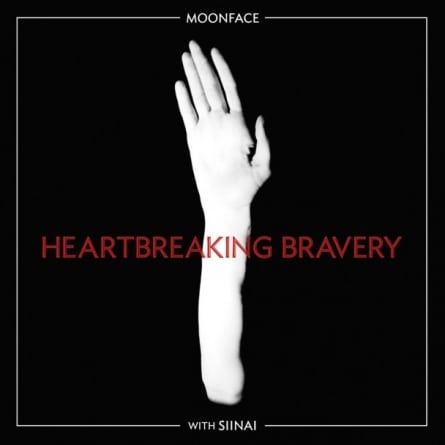 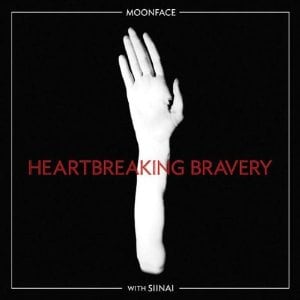 I imagine Spencer Krug’s workspace is a room full of near-toppling piles. Best known as the grand marshal of Wolf Parade, Krug has since lent his talents to such projects as Sunset Rubdown, Frog Eyes, Swan Lake, Fifths of Seven and lately, Moonface. The existence of all of these outlets might suggest some level of artistic fulfillment or perhaps exhaustion – how many project-piles can one person sustain? – but not so for Krug. Even considering Moonface’s catalog thus far, it can be measured in instrument-fetish phases: first, Dreamland EP: Marimba and Shit-Drums followed by last year’s Organ Music Not Vibraphone Like I’d Hoped. And now this solo act gets collaborative in With Siinai: Heartbreaking Bravery. It’s hard to say whether this permutation represents a waxing or a waning, but one thing is for sure, Bravery is a soggy transmission from Moonface’s dark side.

Siinai – a Finnish rock band that had previously toured with Wolf Parade – appear here as Krug’s backing band and artists-in-residence. It’s a dronescape they create, albeit a shifting and dimensional one, stringing and shutting as the compositions cure. The lead-off title track shows us Siinai’s ability to vary their apertures: the opening bars feature slow, purposeful drums, a piano’s chord-accents and some warbling signals that sound like a cross between a Casio preset and a bird call. At the conclusion of Krug’s extended poetic verse, the instrumentation experiences a quick melt, arpeggios cascading as the short burst of warmth triggers a temporary melodic flood.

Siinai anticipates and respects the space Krug requires for his lyrical ideas, which take up a whole hell of a lot of real estate on Bravery. The vocals, which call to mind an un-British version of Psychedelic Furs frontman Richard Butler, bring to life pain, loss, hurt and disappointment (all of that familiar stuff we like to go on about) by way of extended metaphor. While Krug is no stranger to anthropomorphic imagery, it does at times cross over into faux erudition, symbolism lifted from an overtired and overworked MFA student’s first draft. In the same song we have the sentiments: “Now I want your sex/ But I am not the fox/ With blood-stained lips/ Standing over the kill” and “When you see names of the angels/ On the back of your eyelids/ That look like they were carved/ In a fit of violence,” it’s just such a fine, florid vibe, similar to the feeling of trying to be all serious in a head shop. The poetics are puffed up, so to speak. Krug rarely speaks simply but in those rare moments it’s to noticeable effect, such as in the ponderous dirge-blast of “Headed for the Door” in which he reasons, “And if you think the road is dangerous/ Then of course it is/ You gotta listen/ For the cautionary roar.”

If it sounds like a droopy, doomy album, that’s because it kind of is. The best moments are when Siinai rouses Moonface, offering some much needed propulsion in between the epic laments. The transition between “Yesterday’s Fire” (which can only loosely be called a pop anthem) and subterranean sparkler “Shitty City” is a looped pattern of traveling electronic pulses and rosin-dusted string rubbing, the backing beats falling out of the first and breaking in on the second with a completely different sensibility, a cymbal crash and tambourine strike finally demarcating the two songs. “I’m Not the Phoenix Yet” brings the album to acceleration with a woodblock banging out a metronomic beat and the thin honk of a synth bleating Clinic-style exclamatory phrases. Between this and the squealy spaciness of “Faraway Lightning” is the low frequency, oscillating throb of instrumental interlude “10,000 Scorpions,” once again interlinking concepts and offering a reprieve from Krug’s verbosity.

With Siinai: Heartbreaking Bravery is a focused listen, an intellectualist’s way of surveying, surviving and describing emotional damage. Bravery touches at some hidden places but frustrates unabandoned courageousness by talking too much about it.