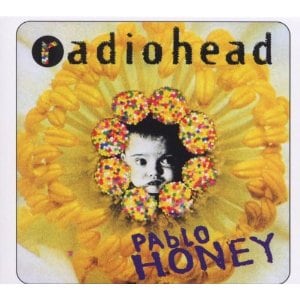 Now nearing their 20th anniversary, Radiohead sputtered to a start in 1993 with their much-maligned debut Pablo Honey. For a band that changed the landscape of alternative music throughout the late ‘90s and has defined the cutting edge, Radiohead was still working out the kinks when they launched their debut. Derivative of other guitar rock from the early ‘90s, rather than branching out into the brilliant experimentation for which the band is now known, Pablo Honey threatened to relegate Radiohead to one-hit wonders (“Creep”) had they not shifted course two years later with the landmark The Bends. Most tracks on the debut sound as though they could have ended up as the theme song to a ‘90s sitcom, and Thom Yorke’s vocals come across as whiney rather than haunting and expansive. It’s mind-boggling that this same band would put out masterpiece OK Computer only four short years later. Today, Radiohead almost never plays a single track from Pablo Honey at their live shows, and with good reason; the album simply doesn’t sound like Radiohead. – Josh Goller

The Walkmen rode in on the slow but feverish wave of “important” New York City bands in the early aughts, with two equally ferocious introductions: Everyone Who Pretended To Like Me Is Gone to the budding blogosphere, and Bows + Arrows buoyed by “The Rat,” to the mainstream. But cracks started to show on A Hundred Miles Off, their third album.

Littered with “not bad” but mostly sluggish and forgettable numbers like “Danny’s At The Wedding” and “Don’t Get Me Down (Come On Over Here)” and sandwiched between great opening and closing tracks that sound nothing like the rest, the album has no real flow or feel. A would-be highlight, “All Hands and the Cook,” is more sinisterly written than anything else they’ve released and in recent years has turned into a dramatic, extended live behemoth, but on record is tinny and oddly neutered. “Tenley-Town,” a random sloppy excursion into punk that sounds written on the spot, finds the Walkmen at their most lost – even the cover art is a confused mess. They nakedly and humorously shook off the cobwebs on the Harry Nilsson reworking Pussy Cats Starring The Walkmen, resulting in a full maturation with You & Me and Lisbon, learning more about the big picture and in turn knowing which points in the record to crank up, tone down, and venture out. But A Hundred Miles Off represents their brief but obvious period of growing pains, a crossroads they luckily came out on the right side of. – Kyle Wall 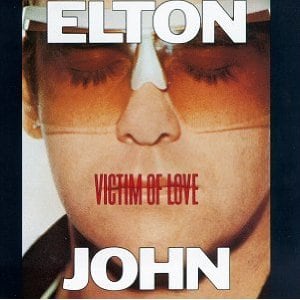 Elton John’s discography is not exactly unblemished, considering all those questionable releases of the 1980s that contained such gems as “I Am Your Robot,” “Just Like Belgium” and the unintentionally hilarious “Wrap Her Up.” This run of bad albums began with the 1979 release Victim of Love, part of Elton’s brief foray into Eurodisco. Elton had shown promise in this genre with his EP The Thom Bell Sessions, recorded in 1977 but inexplicably not released until 1979, just one month before Disco Demolition Night. One month after that almost literal death blow to disco, Victim of Love was released. The bad timing can be excused, and it’s understood that the homophobic overtones of the anti-disco sentiment were not John’s fault. Unfortunately, none of that fully explains the problems with this album. It’s entirely devoid of energy or excitement, likely because Elton only provided vocals, neither writing songs nor performing keyboard. Victim of Love opens with a lackluster rework of the rock classic “Johnny B. Goode” extended by uninspired synth riffs. The entire album is linked together by a steady beat that becomes a depressing, mind-numbing drone that one would rather sleep through than dance to. “Thunder in the Night” dully invokes both “frightening lightning” and “storm clouds hanging over my head“; meanwhile, in “Spotlight,” he sings with an almost audible yawn that his shoes will set the dance floor on fire. The album cover shows Elton with his eyes tightly closed, and now you know why. – Stacia Kissick Jones

Is there ever a larger expectation of disappointment than in the rap sequel? There have been successful sequels when the artists have been able to release a record that stands as a worthy successor… and then there’s Tha Carter IV. Lil Wayne himself had avoided that curse, with Tha Carter II being his most consistent and banging record and Tha Carter III a fascinating look at his diversity… but then he quit his muse, codeine. Having cleaned up his act has sadly lost Weezy some of the fire in his belly – his mixtape output had been lackluster, but Tha Carter IV is a mish-mash of half-baked ideas, including the tepid duo of “How to Hate” and “How to Love”, the latter easily being the worst song that Lil Wayne has ever worked on. Say what you will about the homie Drizzy Drake, Wayne’s attempts at emotional resonance just come across as weak, disattached pap. Rebirth was a misstep too, but his “rock” album at least was an experiment. Lil Wayne has had his hits and misses, and with each he puts his whole into them. When he hits, he absolutely devastates, but on nonstarters like Tha Carter IV, it’s sad to see someone so inherently talented and clever cheese it up. – Rafael Gaitan