Autobiography has always been a strong element of Spike Lee’s work. Of his first six full length films (as well as his thesis film), four take place in his native New York City, a metropolis that seemed as much a character as a setting. Similarly, his early work tended to feature him in supporting roles (She’s Gotta Have It and Malcolm X) and occasionally a primary figure (as in Do the Right Thing), keeping the director more visible and part of the action of his own stories in a way few filmmakers do. He even used his own experiences as a primary source for the atmosphere of a historically African-American college in School Daze. But his 1994 film Crooklyn takes that tendency a whole quantum leap forward, telling not just a story set in his beloved Brooklyn neighborhood or about his own life, but his whole family. And not only that, he actually made it with his family.

Lee also has an almost preternatural talent for opening scenes, and Crooklyn is no exception. Whereas Do the Right Thing’s vividly colored, Rosie Perez-bouncing, Public Enemy-fuelled intro foretold the immense energy and confrontation of its story, and Malcolm X’s invocation of Rodney King and a burning American flag indicated the epic social scope of what he was aiming for, Crooklyn practically opens as a love letter to Brooklyn. Set in the famed (or infamous?) neighborhood of Bedford-Stuyvesant, the camera sails through quick snippets of day to day life in the 1970’s. Little girls jump rope in complex, arcane tangles; men play dominoes and talk shit; little boys run frantic races in the street and smash windows playing stickball; all over, people lounge on their stoops to socialize and antagonize. In short, it’s a Brooklyn pastoral, a beautiful expanse of red brick, hot asphalt, loud clothing and loud voices.

While Crooklyn’s examination of an urban neighborhood deliberately hearkens back to Do the Right Thing, there’s a primary difference in play here: while his earlier film used the denizens of Brooklyn as a series of choruses reflecting racial turmoil, the same devices exist to highlight a single central family and their travels. The Carmichaels are blatant stand-ins for Lee and his family, which is not to say that he’s ever attempted to disguise that; the director wrote the film with his siblings Joie Lee and Cinqué Lee, and each has a young version of themselves in the Carmichaels. In addition to various siblings, the family is headed by Woody (Delroy Lindo), a struggling jazz musician, and Carolyn (Alfre Woodard), a schoolteacher financially supporting the family. The majority of the film is episodic, focusing on the tempestuous relationship between Woody and Carolyn, both of whom feel put upon and unsupported in ways that seem incompatible and yet very fair, and on their only daughter Troy (Zelda Harris), based on Joie. The kids fight, as kids do, copy moves off “Soul Train” (it is the ‘70s) and create a deafening chaos out of adolescence that is as inflamed by their parents as it is guided. 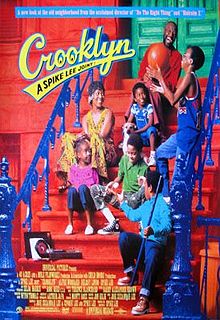 It’s a remarkably nuanced portrayal of a family that is fueled as much by strife as they are their obvious affection for one another, and particularly so for the portrayal of two characters: Woody and Troy. Woody is one of the most fully developed African-American father figures in film, a man torn between his art and his family. His music bolsters him and brings him down; his desire to express himself through music (and his failure to profit financially from it) is heart-wrenching. But at the same time, he is a strong, vibrant man, one who defends his children from their mother’s occasional rampages and just can’t seem to figure out how to find the life he needs. But even when Carolyn kicks him out (after a fight that begins with a bounced check and ends with a full family dogpile), he doesn’t abandon them. He tries to change, he supports them emotionally, he may be overly indulgent, but he’s not afraid to stand up for who he is and who he wants to be. For her part, Troy is the emotional center of the children. She’s childish in the most basic sense of the word, as apt to be petty and selfish as she is innocent, and as played by Harris, incredibly emotive even when expressionless. It’s easy to see how much of herself Joie Lee (who also has a minor role later in the film) put into the character, who is never anything less than completely realistic. In nearly every scene, including a moment of petulance after being caught trying to shoplift and the dreamy shot of her stumbling down the stairs calling for her father and mother to stop fighting late in the film, she’s arresting.

In truth, all of the Carmichael children are remarkably well drawn, though Troy and Spike’s stand-in Clinton (Carlton Williams) have the most screen time. A shot of the two mourning together at a funeral late in the movie is a near-perfect summation of sibling relations: awkward, comforting and instinctive. It’s heartwarming to think of the people behind the film re-creating their childhood and a world scored by the Jackson Five and Curtis Mayfield, one in which they reveal all the pain and love that happened long ago.

For all its merits, Crooklyn does occasionally feel like Lee the filmmaker spinning his wheels. On a technical level, he doesn’t deviate much from his regular tricks, like the aforementioned montage intro, or a rapid fire breaking of the fourth wall by a number of characters that really should be called a Spike Lee sequence by now. When he does throw something new, it tends to be brief and comedic, like a short shot of neighborhood glue-huffers Snuffy (Lee in a cameo role) and Right Hand Man (N. Jeremi Duru) sailing upside down through the neighborhood after spending some time with an industrial solvent. Crooklyn sometimes feels more like a trio of siblings thumbing through a thinly fictionalized scrapbook, but it never feels like a less engaging film for that. It won’t be remembered as one of Lee’s greatest films, but will as one of his warmest and most human.