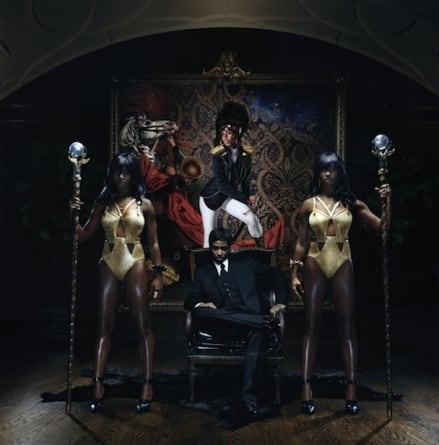 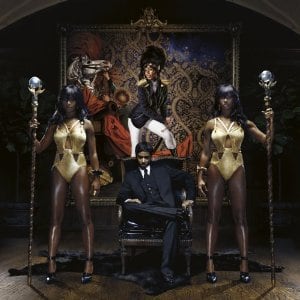 Less than 10 years have passed but already you can trace the lines of influence that spread in the wake of M.I.A.’s global music piracy mission statement Arular. The legacy of that album goes beyond its net sales or the diva metamorphosis of its star, measure it instead in the way it allowed for a constant flow of appropriation that went in all directions, through all worlds, first, second, third or any combination of more tactful and appropriate phrasings. Like its more mainstream peer, Justin Timberlake’s almighty FutureSex/LoveSounds, it awakened a greater capacity for artistic thievery within not just its genre but all other pop variants surrounding it, and it reached critical saturation far sooner (that’s not a coincidence that Diplo is out there on the charts this very moment, acting as the icy bridge between the two on Usher’s “Climax”). Arular made Diplo a household name and planted the seeds of Major Lazer’s shantytown dance party, put M.I.A. on Jay-Z’s radar, allowed world music to be the domain not of ponytail clad clods but of tastemakers and thrust Vampire Weekend and their descendants into the kind of “white boys stealin’ the blues” discussions M.I.A. would never, ever have to worry about. And it also gave us a more stable photocopy of the source material in Santigold.

Santigold has always been an easy figure for some critics to hate because unlike M.I.A., her intent isn’t shock and awe but shake and thrust; she aims squarely for the top 40 urges beneath your belt rather than the gleeful anarchist leanings of your inner child. Santigold has lived forever in M.I.A.’s shadow, sharing her producers, her sound, her image if not her ambition and that’s reflected in the title of her new release, Master of My Make-Believe. It reads and sounds like a playful dig at her former master, a recognition of what she owes that also comes across like a kiss off, an indication that even if what she’s got is an imaginary version of the original, she’s still the master at it and the bona fides don’t matter so much when what you’re selling is all pop fiction anyway.

But that’s all just gravy the instant the record begins with “GO!” a gunshot opener that works a double shift, reminding listeners why they flocked to Santigold in the first place and acting as a warning shot across the bow of the indie pop landscape that keeps threatening to leave her and her ilk behind. “GO!” is the sound of a pop student shooting a snide middle finger to the Black Keys’ blue collar rockism and making it bratty and sexy in the same instant, two different beats from two different worlds thrusting the same lip smacking vocal to the same logical conclusion: “People want my power/ And they want my station.” Santigold struts to an M.I.A.-referencing yelp and mission statement, and behind her Switch lets loose a slim digital drum, tap-tap-tapping until it melts into a bracing new wave thump-thump-thump, and if you forgot why you liked to dance regardless of who’s watching or why, you suddenly remember.

Master of My Make-Believe is an unstoppable pop juggernaut in moments like “GO!,” cocky in its thievery, brash in its thrust and swagger. But the moments like it on the album represent a double edged sword, exciting and bold, sure, but also impossible to ignore within the context of mentors and similarities. Where Santigold explores something more uniquely her own– the icy dancehall-tinged bravado of “God from the Machine,” the bedroom electro-pop of “This Isn’t Our Parade,”– she’s less exciting, somehow less vital in individuality than in crowd sourced pop pillaging. Occasionally she finds a happy medium, like the reggaeton-flavored mission statement “Pirate in the Water,” which recalls any number of modern influences but still somehow immediately feels different. But it still can’t help but bow down before the potency of something like “Fame,” which is a devastating pop example of biting the hand that feeds you, a carefully calculated future hit wrapped around a chant of “We don’t want the fame” that stylistically apes the former teacher who brought that fame in the first place.

And then there’s “Big Mouth,” which has been available in video format for some time now and rides a Major Lazer-beat to the bank in a way that’s the direct antithesis to Beyonce’s reconfiguration of the exact same rhythm. Is Santigold’s intent to make that Major Lazer connection blindingly obvious, a way of pointing out that she was collaborating with that entity before world class divas had even heard of them? Or is it just a great beat that still has plenty of life left in it when it comes to chart assaults?

As complicated as Santigold’s intentions and moods are to read on Master of My Make-Believe, it’s never a difficult listen, stocked full of hooks and easily hummable melodies. But outside of its earworm tendencies, Make-Believe’s real draw is that hidden complexity, which allows listeners a rare glimpse at a mutually beneficial yet vaguely hostile pop relationship. It’s not an example of the album as a revolutionary or redefining statement, but instead a reminder that sometimes being a musical pirate means eschewing public spectacle in favor of tightly wound pop statements that pack the punch of rebellious roots but soften the blow with charm and charisma and smooth likability.