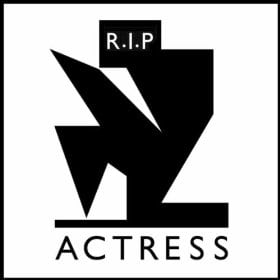 [xrr rating=3.5/5]Actress has interestingly (and successfully) positioned himself between the world of dance music and all of its spindling sub genres. R.I.P., the third full length from UK producer Darren Cunningham, cleverly splices and subdivides 15 gray day dance tracks into a transporting 57 minutes.

These recordings are daring. Some of them feel huge, some of them take place in the smallest of rooms and in others, perhaps the rafters of a high castle ceiling. Listening to “The Lord’s Graffiti,” a track that cued up in a shuffle of songs, I had to look down at my iPod, thinking it was a Daft Punk song I had never heard before circa Homework. Experiencing R.I.P., the diametrically opposite can happen for instance, with micro-dance moments like the murky headspaces of “N.E.W.” and “Marble Plexus,” where washes of software synth melt chemically over a pointed, deliberate and dependable beat. R.I.P. has its pleasantly derivative instances, like on the twisting of “Tree of Knowledge” into a wiry percussive mess that belongs to both Euro-industrial bloodlines and Detroit deep house history while “Shadow from Tartarus” comes from the darkest of caves – a smashing reverb-gutted shimmer of a Berlin late-night/early morning rave galvanizer. “Iwaad,” a stuttering false skip of glittering arpeggiated notes, winks back at “Lost” from Actress’ previous album, the excellent Splazsh.

There’s the blurred out twinkling of the opener too: “R.I.P.” which sounds like the rush of parallel red and white lights of thick urban traffic in a strange city you’ve never been before but feels familiar in a paradox of emotions. This kind of closeness to your heart and familiarity to your subjective ear continues on the R.I.P.. Painting different coats of ideas on top of seemingly disparate ideas, Actress’ sonic vision of the present future, R.I.P. is vast. It’s one of those releases that after listening to all the way through, it affords you just as much satisfaction as it poses question marks. Sonic scenes on R.I.P. will come and go, tracks lasting a few seconds or just over a minute but also arching over six. There’s an eerie self-referential theme that starts with track three “Holy Water,” which evinces a literal sound of trickling water exclusively through digital sounds with magic trick type artifice. Later on there’s “Uriel’s Black Harp” that points to the album’s cover of a geometric rendition Uriel, an archangel who appears in several texts including Milton’s Paradise Lost and Jim Butcher’s Small Favor.

Actress calls to mind the playful intricacies of Four Tet on “Ascending” and “Jardin” and also the fierce creativity of Flying Lotus on “Raven” and “Holy Water.” He’s a formidable producer, riling in the mind the times of when Burial and Zomby first appeared in the UK dub scene in small, undisclosed places where big bass was played loud at the turn of the latest century. While it’s easy to compare Actress to those subject contemporaries based on technique, sound and accessibility, in some ways that evaluation does not fully realize his vision or style, unique to the scene. Actress’ R.I.P. truly is the gestalt of his most recent recording endeavors. Genre reducing: please, rest in peace.