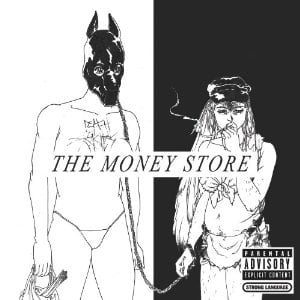 [xrr rating=4.0/5]The experience of listening to The Money Store is similar to watching a movie where, in the first shot, we see a battle-scarred urban war zone in some far-off yet vaguely familiar country, only for the camera to pull back and reveal that the action is really occurring in the United States. The chaos and unrest that lies “out there” is also “in here,” Death Grips seem to be continually implying throughout the album. On “I’ve Seen Footage,” vocalist MC Ride (Stefan Burnett) barks mentions of a cop opening fire on a kid, an ambulance running over someone in Brazil and a “boy soldier,” effectively collapsing the distinction between First World and Third World. The Money Store sounds like a channeling of global slums, a jackhammer-insistent reminder that they exist here too in the “developed world”: the chorus of “Get Got” resembles the addled babbling of a junkie in need of an exorcism, while the percussion throughout the album hits with the force of buildings being demolished, leaving ruins in their wake. Yet The Money Store is also carefully, meticulously composed, not the slapdash punk blast it appears to be. This makes the chaos at its center seem intimate and familiar, never merely foreign.

This sense of urban warfare, of the tension between composure and chaos, recalls much about hip-hop, which is clearly an important influence on Death Grips. But their music could hardly be called rap in any recognizable sense. Vocalist Burnett may go by the name MC Ride, but what he does isn’t all that much like a hip-hop MC. Instead of a flow, Burnett’s vocal approach is more like a bull let loose in a china shop, stumbling and stampeding through the musical environments set up for him by Zach Hill and Andy Morin. There’s a crazy, not-quite-nimble grace to his vocals, poised midway between rapping and shouting, especially in the way he can pause on a dime and shift directions despite always seeming to be nearing collapse. The turbulence and hidden, unknowable pain that colors his voice, springing out from some internal and alien world, is an ever-present feature of Death Grips’ music, so much so that it occasionally sounds cartoonish and absurd instead of conventionally emotive, partly because it is so bluntly unavoidable.

Burnett’s lyrics and vocal style set Death Grips clearly apart from conventional hip-hop. One would think hip-hop’s sense of local, on-the-ground reportage would fit quite easily within the Death Grips aesthetic, but there’s a fundamental difference between Burnett and most other rappers. Hip-hop’s steady, thickly accented flow of slang and bent or stretched syllables may sound incomprehensible to outsiders, but there’s always a knowledge base existing within a specific social context that would allow for these lyrics to be decoded. MC Ride sounds just plain incomprehensible. His style isn’t regionally influenced, and while he frequently uses slang, he also throws around words like “basilisk.” But it’s Burnett’s almost inhuman roar that, above everything else, obscures the meaning of his words. Instead of speaking in a dialect, he seems to give voice to an internal language shared by no one other than himself. You probably won’t understand all the words he raps, pulverizing them as they tumble out of his mouth, but the ones you do hear suggest an uneven internal monologue that is intermittently exposed to the outside world. On “Get Got,” we hear, “Red light flash / Dem stop, I smash,” as if speaking only to himself, the pep talk of a man who thinks he’s a bulldozer.

Burnett is probably the first aspect of Death Grips you saw and heard, and that’s somewhat odd for a group whose primary appeal is in the music behind him. It’s not that Burnett is not integral to their sound, but as a performer, he has a rough-hewn quality that can be off-putting. In fact, listeners will probably decide whether they like the Death Grips aesthetic within minutes, if not seconds, of hearing it, and Burnett’s passionate and earnest intensity has a lot to do with shaping those opinions. But behind him there is an expertly thick slab of music that pounds away, providing the perfect bedrock for Burnett’s manic exhortations. The speeding, muscular synths on “The Fever (Aye Aye)” or the central, searing riff in “I’ve Seen Footage,” so thick and corrosive it threatens to tear through the audio recording itself, are eminently catchy hooks, hard enough to hang with rock and punk but also clearly pop-minded. One of the album’s most thrilling moments occurs on “System Blower,” where Burnett yells, “System (system) blower… system (system) over” and a swirling, cacophonous and surprisingly tuneful racket slams into the listener as if summoned up by Burnett’s cry. Here and elsewhere, the music constructed by Hill and Morin seems to be controlled by Burnett himself, not so much the eye of the hurricane but its supernatural source.

The Money Store’s most conspicuous single, “I’ve Seen Footage,” presents the album’s central thematic concerns as tidily as one could want. Unlike, say, Joy Division’s “Atrocity Exhibition” (This is the way, step inside), concerned with the direct experience of atrocity, Death Grips’ “I’ve Seen Footage” dwells on the media-saturated world we currently live in, where atrocities are daily glimpsed from remote locations. The refrain “Seen crazy shit, man, crazy shit” perfectly captures this in its colloquial and nonchalant argot. But if The Money Store sounds like walls being broken down and buildings toppled, it’s partly, one feels, because of the need to erase that boundary separating oneself from the “footage.” The intensity and immediacy of Death Grips’ music stands as a corollary to this: you’ll either like their music or you won’t, but if you do, you’ll have no choice but to be pulled in towards them and come face-to-face with their well-ordered chaos.