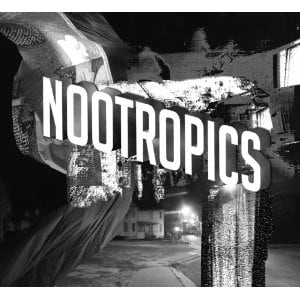 [xrr rating=3.5/5]Baltimore’s Lower Dens make music that reads interesting on paper, sounds only slightly less intriguing in execution, and leaves in its wake vapor trails of aural stimuli, tendrils of melody and vaporous atmospherics that slowly recede from memory the further you move from the actual experience. They carry a built-in aura, something a myriad of bands have artificially constructed over the past few years that seems to somehow flow naturally from them, without attempting to coax undue feeling from purposefully sterile environs. None of this is meant to be interpreted as a shortcoming–what they do, they happen to do well, and even at their most opaque, Lower Dens are as precise and functional as a band this aesthetically constricted could hope to be. I don’t think it’s much of a coincidence that both of the band’s album covers thus far have been rendered in shades of gray: Lower Dens exist in a state of self-imposed limbo, straddling the line between minimalism, kraut, psych, industrial and indie rock. Their sophomore album, Nootropics, encompasses all of the above with surprising ease, pushing outwards when inspired but mostly tilling the nutrients from a particularly arid soil that in contemporary indie has few peers.

The band’s 2010 debut, Twin-Hand Movement, was all swirling guitar harmonics and loosely structured psych meditations. Nootropics tightens things up considerably, streamlining chord progressions to a bare minimum, locking into a percussive stride somewhere between metronomic and playfully tripping, while frontwoman–I hesitate to say leader, as personalities seem very purposefully dwarfed here–Jana Hunter paradoxically steps out from the band’s foggy churn only to lay into a strict, almost formalist, meter and enunciation, which at times is as bleary as Beach House’s Victoria Legrand, her closest contemporary analogue. Her days as one of freak-folk’s most playful flower children are behind her, though her predilection for melodic concision and arms-length thematic disclosure remains almost confrontationally intact. As a result, there’s little way into the meaning of Lower Dens’ music–gleaning much from such curt titles as “Brains,” “Stem,” “Lamb,” and “Candy” can prove as tantalizing as it does frustrating–but in their dedication to lock-step precision and unmannered stylistic gestures, they seem to be courting dichotomous terrains between the analogue and the synthetic, the mortal and the mechanical, the artificial and the instinctive.

Opener “Alphabet Song” skips along on a tricky rhythmic foundation while the band seamlessly blends elongated keyboard drones and laser-focused guitar leads. Hunter bends syllables into pure wordless sound and the track moves with a purpose that a few of the tracks on Twin-Hand Movement failed to engage. Lead single “Brains” takes things even further in this more forceful direction. Behind a forward thrust reminiscent of mid-period Stereolab, the track bobs along with an intensity that Lower Dens have never fully courted before, and it’s their best standalone piece to date, catchy without leaning on predictable structural cues but chiseled enough to flash some real instrumental muscle and melodic intuition. In fact, they hit on such a good idea here that the track spills over into “Stem,” an even swifter epilogue that lets the listener bask in the soft-focus glow of the band’s nonchalantly confident attack. “Candy” inverts the formula slightly, still nodding along crisply but spacing things around the mix with slide guitar melodies stretching out behind Hunter’s most intelligible vocal hook. It may not embody the sweetness implied in its title, but “I never could let you down/ Couldn’t we make it if we tried” is about a forthright as Hunter allows herself to get in this full-band guise.

The album’s back half lets things become more diffuse. “Lion in Winter Pt. 1” plays as an obvious intro to the throbbing, Kraftwerkian “Pt. 2,” yet it’s barely there at times, embracing a steely ambiance that crests and recedes subtly over four minutes. Twelve minute closer “In the End Is the Beginning” burrows deep and determinedly into a hypnotic push-pull between whinnying keys, bulbous percussive accents, and spacey guitar chords, closing the circle on an album that has spent much of its 50 minutes searching for a synergistic energy that only occurs when all these elements line up in perfect harmony. “I feel different now than I did before,” Hunter sighs as the track spins unassumingly in place, and it’s not hard to identify with a similar feeling of renewal as Lower Dens open narrow passageways here between emotion, intellect and instinct. It’s not the most exciting tact to take in our maximal nation of 2012, but it represents an admirable, increasingly rare professionalism in an era of amateurs. Lower Dens rarely take a traditional risk–let alone a wrong step–but in a weird way, their stone-faced acumen and compositional confidence is its own kind of rebellion.

Grouper: The Man Who Died in His Boat

[xrr rating=3.5/5]As listeners we’ve become so accustomed to the constant influx of …