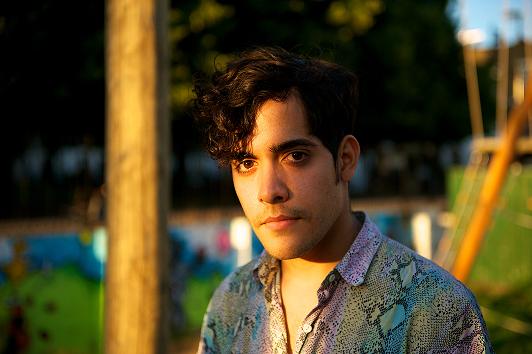 On a drizzly, very Portland Thursday night, a mix of thirtysomethings clinging to hipness, starry-eyed college students arriving late to the scene and the occasional Skrillex impersonator filed in to the Doug Fir Lounge to watch Neon Indian’s Alan Palomo dance. That wasn’t all they bought tickets for of course, but they showed ample appreciation for it when he did (and returned the favor as frequently as possible). To that end, though openers Lemonade weren’t quite able to keep the crowd moving by the time they finished their set, it took only a whining synth phrase, the barest drums and some indiscriminate bleeps at the onset of Neon Indian’s time onstage to set the crowd asway. Frontman Palomo, in a leather jacket (and Galaxie 500 tee) aping Crocodiles’ Brandon Welchez, who occupied the same stage two months prior, kicked things off proper with a dark-glam rendition of “Hex Girlfriend” off 2011 full length Era Extraña.

With a smoke-spewing monolith camped behind him and a backing four-piece band, Palomo and crew then called on the fuzz gods and got the whole room vibrating for “Blindside Kiss.” iPhones were held aloft (no one having told their owners the world does not need more shitty-quality concert uploads on YouTube) as Palomo’s voice strained through the verses, throbbing bass displacing the air in massive bursts of vacuum. Having moved through one of the “Heart” interstitials from Era Extraña as well as a deeper cut, shuttering percussion, textures and synth spreading it on with a slick rhythm and slide, “Future Sick” was up next. Its heavy drum and bass lines, however, meant Palomo was buried in the mix. His efforts to get the crowd in on the refrain, “I know how it ends now/ There’s little you can do” was met without much success as a result.

With Palomo silhouetted against purple-blue strobe, breaking out a couple moves (to the audience’s apparent glee) with his back to the crowd, the band struck out on a pitch-perfect rendition of “Fallout,” sowing wildness in the crowd with a straight-up New Wave hop. As billows of smoke leaked in gossamer-thin strands and sat overhead like lumps of snowpack, Neon Indian hit a groove and dug in, electronic drum kit and bass paced in steamy unity. For all the thrill of “Fallout,” though, “Arcade Blues” came out washed out, lacking the punchy insularity of the recorded version. Whether that was owed to the song’s overwhelming wallops of dual percussion, Palomo’s self-admitted difficulty in keeping up with the hi-hat or the constant feedback that tore the heart out of his vocals, it’s difficult to surmise.

The title track off 2009’s Psychic Chasms fared better, however. Impossibly thick bouts of smoke carried misted body sweat to the back of the room and the crowd shook and convulsed as Palomo and co. burst the crystalline track by the seams, glitching it out as the gray haze slowly ate the audience altogether. The 8-bit opening peals of single “Polish Girl” received instant recognition after “Psychic Chasms” faded, with everyone not currently dancing, or standing along the side walls on the booths’ seats, scrambling for open space on the main floor. The distinctive bass whorl and half-stepping rhythms of “Deadbeat Summer” followed, seeming weirdly out of place on that cool Portland spring evening.

The feverish disco feel of “Ephemeral Artery” closed the official set, beats and big end-line bursts landing like lightning strikes among the crowd as Palomo let himself get lost for a moment in the swirl and smoke of it all. Heavy metal percussive runs finished the track off and Neon Indian departed the stage, returning a few minutes later for two encore songs, a zippy number filled with synth and pops that left the crowd perplexed but grateful and a crunchier, more jagged version of “Should Have Taken Acid With You.” Beefed up, shimmering and all rhythm, the final encore turn was a decent representation of the night as a whole – Neon Indian came to make the audience move, no more and no less. Any hip-shaking Palomo did himself was a bonus.