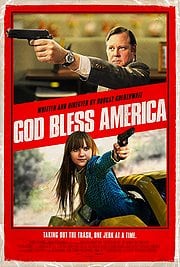 [xrr rating=1.75/5]God Bless America has its crooked heart in the right place; too bad it’s so inept it can’t do anything about it. America is rotting at its core. Pundits shout at one another on television, reality shows drag humanity down to its most base level, cell phone use allows us to sidestep common courtesy and we’ve become less tolerant of others leading to a nation gobsmacked by the lowest common denominator. Middle-aged schnook Frank (Joel Murray) has been fired from his job, told he has terminal brain cancer and can’t reconcile the fact that his daughter is a spoiled brat. So what does he do? He pulls a D-Fens and starts blowing away all the sick bastards that have made the land of the free into the land of the fucking moronic.

Writer-director Bobcat Goldthwait has never been one for subtlety, but his last film World’s Greatest Dad gave Robin Williams his best role in years. With no stars to backup his rhetoric, Goldthwait’s script turns into one long rant about what ails America. But that’s not the real problem. We sorta kinda want Frank to take out the O’Reillys and Kardashians and Cowells that pollute the world at first. The real problem here is the introduction of Roxy (Tara Lynne Barr), the chipper teenager who wants to play Bonnie to fat boy Frank’s Clyde. Chirpy and excitable, Roxy stops the film short in each and every frame she populates.

Frank and Roxy are anything but flesh and blood characters. They are merely ciphers for Goldthwait’s politics. And they are damned obnoxious about it too. While Goldthwait wants us to cheer as they mow down a movie theater full of talkers and cell phone users, it’s really difficult to care when the characters are just as obnoxious as the bible-bangers and assholes they are shooting. Let’s forget plausibility too. Frank and Roxy go on a killing spree, which leads them to an “American Idol” sort of show and we don’t get a whiff of the law until the film’s predictable finale? I call bullshit on that, Bobcat.

So are Frank and Roxy actually any better than the folks they kill? I’m not sure and I’m not sure that Goldthwait knows either. Maybe I am missing the irony here but by actually murdering vile people, doesn’t that make the protagonists in God Bless America even worse than the assholes they are putting in the ground? Yes, “American Idol” sucks, Glenn Beck blows and laughing at folks such as William Hung is pretty horrible, but so is getting off on thoughts of murdering them. God bless you, Bobcat, but people should avoid this one at all costs.