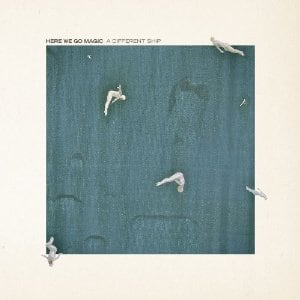 [xrr rating=3.0/5]Here We Go Magic’s A Different Ship opens with an intro that sounds like a reverb pedal hooked up to Tom Waits’ garage, with percussive clanging leading into the simple major-key acoustic strum of “Hard To Be Close.” It’s a disjointed introduction linking two of the album’s simplest but most disparate moments. Then, when the 0:58 mark hits, ears perk. Wait, what is it about that tone of the guitars, gliding over those tense, tightly-wound rhythms? Who is it we’re listening to again?

It’s at that moment when A Different Ship becomes delicately complicated for its remaining 40 minutes, like finding out your new beau is on a break from a 15-year relationship with a much older, cooler fellow. Yes, the subtle musical magician Nigel Godrich’s fingers are all over this one, and his work here presents quite the paradox. With influences vibrant and varied, a humbly neurotic approach to mood-building, and an expert ability to lock down a groove, Here We Go Magic were approaching something close to perfection on Pigeons, but Nigel Godrich has uniquely neutered and complicated that magic within every minute of every song on the album. Alternately stated, Thom Yorke and his ponytail are the 800-pound gorillas on this Ship.

Structurally, “Hard to Be Close” is relative to Pigeons, looping a simple melody or two with chattering background voices that echo Temple’s growing angst. But Godrich’s techniques – the drums with no room to breathe, the panned guitar jazz ping-pong, subterranean, aquatic bass – make for a large, balding British monkey on these normally freewheeling Brooklynites. Granted, they have always favored a staid groove and subtle atmospherics over, say, a noisy guitar freak-out or pitch-shifted vocals (not comparing them to anyone in particular), and songs like “Over the Ocean” and “I Believe in Action” shine their strong points far. The latter song sums up the wrong kind of tension here, with a difficult melody floating through the gaps of a punchy guitar exercise. It’s an impressive composition, but all of the criss-crossing factions fizzle out before reaching any revelation.

The initial crashing chorus in “Make Up Your Mind” provides a mid-measure surprise, but instead of building off of it to grow toward a later, loftier peak, the structure repeats itself, adding in random synth warbles. A Different Ship encounters this issue throughout, with nary an appropriate climax or interesting structural progression in sight. It may be the first – or at least most obvious – record to be so heavily influenced by late-period Radiohead; even if the Godrich stamp was hidden, it’s hard not to hear songs like “Scatterbrain” and “A Punch-Up at a Wedding” lurking underneath melodic lurches like “Alone But Moving” and “Over the Ocean.” But when a frenetic song like “How Do I Know” should explode into a showstopper, a barnburner, a “2+2=5” or “There There,” it again drowns in a series of Godrich’s in-and-out aural distractions.

A Different Ship is not by any means a chore to get through – it’s a mildly salty but enjoyable play, and as you might suspect by this point in the review – there are some undeniable grooves. But the push and pull of Godrich’s old habits (that work wonders on other songwriters) are just not a fit match for Here We Go Magic. “Nobody wants to sit in the middle,” sings Temple in “I Believe in Action,” but after the game of tug-of-war that’s taken place on A Different Ship, that’s exactly where they’ve landed.

[xrr rating=3.0/5]Suckers don’t have much of a story. A Brooklyn band wielding hooky…